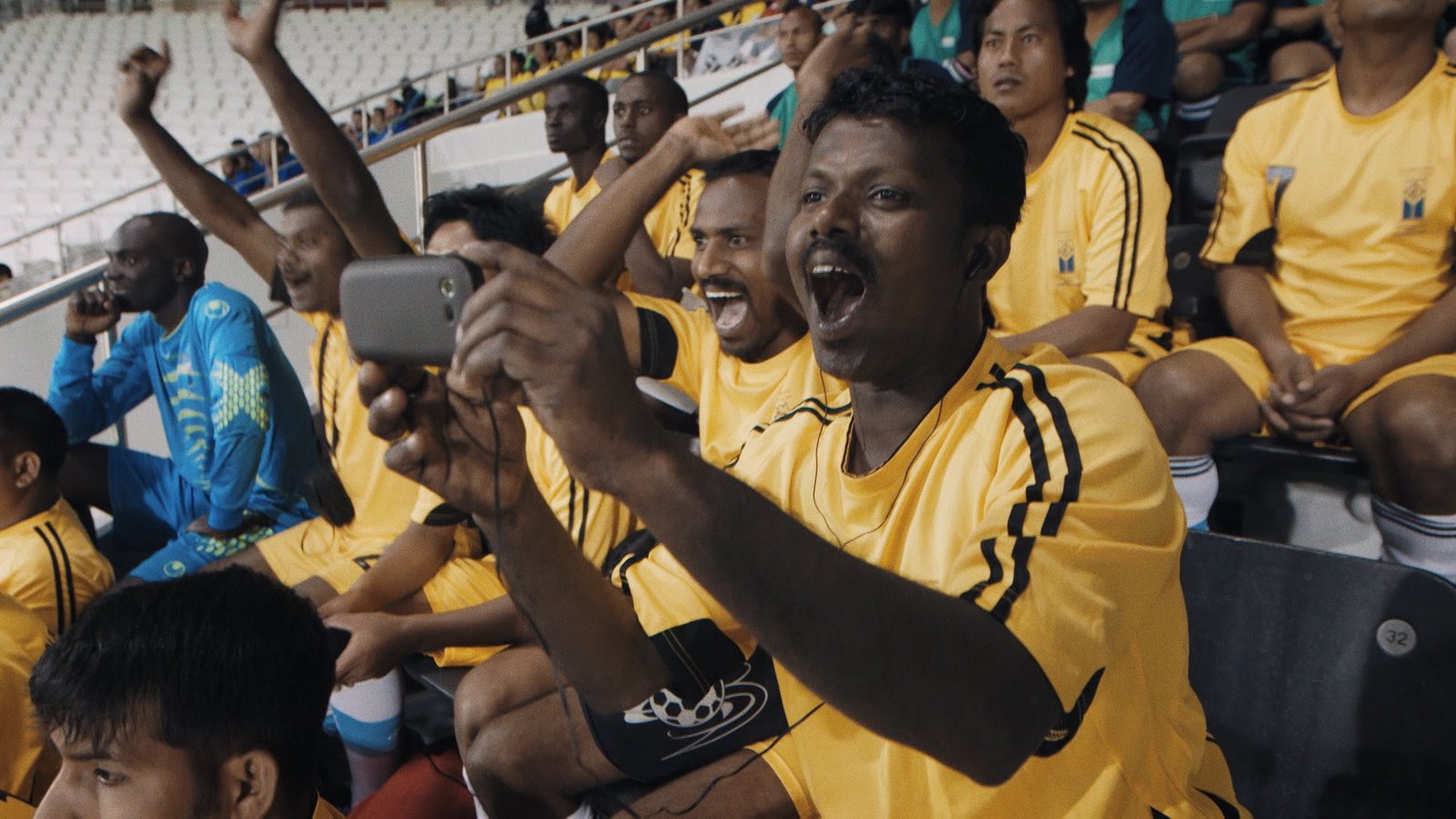 In this lesson, students will use a real-life situation--the construction boom occurring as Qatar prepares to host the 2022 World Cup--to investigate a workforce development plan for a fictional U.S. company. They will work in teams to research various facets of the issue and write final recommendations as if they were presenting written reports to higher management. The task will require them to learn about Qatar, consider ethical labor practices and human rights standards and think through workers' needs as they make decisions about whether to invest company resources. To prepare for their task, students will view clips from the documentary The Workers Cup, which provides students with an extraordinary opportunity to learn about the lives of foreign workers currently in Qatar.

In this lesson, students will use a real-life situation--the construction boom occurring as Qatar prepares to host the 2022 World Cup--to investigate a workforce development plan for a fictional U.S. company. They will work in teams to research various facets of the issue and write final recommendations as if they were presenting written reports to higher management. The task will require them to learn about Qatar, consider ethical labor practices and human rights standards and think through workers' needs as they make decisions about whether to invest company resources. To prepare for their task, students will view clips from the documentary The Workers Cup, which provides students with an extraordinary opportunity to learn about the lives of foreign workers currently in Qatar.

In this lesson, students will:

The lesson takes place over two class periods with an intervening project.

Class 1:
Introduce the assignment (see below).

Divide the class into teams. You can choose to have two large teams and allow students to figure out individual assignments within those teams, or you can divide the two large topic areas into smaller chunks that are assigned to more than two teams.

Begin the research process by showing the clips from The Workers Cup. Explain that students will see selected clips from a film about foreign workers who are building Qatar's facilities and infrastructure for the FIFA World Cup (soccer tournament) in 2022. The title of the film comes from a football (soccer) tournament that FIFA sponsored for teams of workers from the companies involved in the massive construction efforts. Show all four clips sequentially, pausing briefly between each to allow students to link the film's content to specific facets of their assigned tasks (looking at things like housing, wages and so on).

Allow teams time to meet and determine their work processes, including assignment of specific tasks.

Class 2:
Teams will share their findings and recommendations. You may want to take on the role of the chief executive who decides whether to accept or decline students' recommendations. Or you might invite someone from the local business community to play that role. In either case, the role will involve questioning students about their research and conclusions.

Scenario: You work as a mid-level executive in a U.S.-based hotel chain operating properties across the world. It is a publicly held company, so it has a fiduciary responsibility to shareholders to provide a return on investment, and there is always market pressure to produce substantial profit.

The chain is considering the possibility of building a new hotel in Qatar in time for the 2022 World Cup. Due to the frenzy of World Cup facility construction, there are no native Qatari workers available, so you must recruit foreign workers. Planners estimate that hotel construction will take three years, so you must find workers who are both skilled and willing to live in Qatar for long stretches of time.

Further complicating the situation, Qatar has little housing available for the foreign workers streaming into the country. In fact, foreign workers outnumber the entire native population of Qatar, comprising 60 percent of the people currently in the country. That has led to concerns that foreigners might overrun the small nation, so the government (which grants construction permits) frowns on foreign workers interacting socially with people outside of the construction zones.

On the upside, the hotel would give the chain a presence in Qatar, home to a U.S. airbase. The long-term profit potential is quite good. Qatar's government has generally been welcoming to American investments, but as a small nation, it has only a limited amount of land to accommodate all interested companies. Competitors are already committed to building in the country, and the chain risks being squeezed out for decades if it does not act now.

The Task: Your job is to investigate your assigned topic related to labor and, together with your team, make a final recommendation about the advisability of the project. In other words, based on what you have learned about the labor situation, should your company commit to building a hotel in Qatar in time for the World Cup.

You can assume that others are working on other important aspects of the project, such as availability and cost of materials, design and infrastructure challenges and financing, so consider those areas extraneous to your task.

Because this is a fictional project, we understand that it may not be possible to obtain exact numbers, which means you will not know what overall project costs will be, so you need not come to a conclusion about profitability. Instead, emphasis should be on identifying the issues that the company must address and the likelihood that it could successfully address them.

Final reports must be in written form and must include the following:

Teams will also be responsible for orally presenting a 5-10 minute summary of their findings and recommendations and answering questions that classmates or "company executives" might have. Check with your teacher/professor about requirements for visual aids to accompany this presentation.

Issues to address include:

Provide actual numbers to the students and require them to do cost/benefit analyses of various recommendations or practices.

Research how current international trade agreements (such as NAFTA and TPP) will affect workers in Qatar, including their enforcement mechanisms. Research how amendments currently being debated might change whether and how companies can hire migrant workers in Qatar. Write a position paper that makes the case for a proposed amendment to the trade agreement you researched, and send it to your legislator.

Screen the entire film and brainstorm actions that students might want to take in relation to the current World Cup (which is in Russia) or in preparation for the 2022 World Cup in Qatar.

This is a list of organizations, websites, articles and other materials that may be helpful to teachers in developing the lesson, or for students as they are researching.

The Global Compact: How to Develop a Human Rights Policy
This is a guide for businesses on developing a human rights policy that includes guidance on fair labor practices.

Living Wage Calculator
The site provides information about how a living wage is calculated, though it only covers the U.S. Additional helpful information can be found at www.universallivingwage.org.

International Labour Organization
This agency of the United Nations recommends and reports on labor practices to ensure fair treatment of workers.

SL.11-12.1 Initiate and participate effectively in a range of collaborative discussions (one-on-one, in groups and teacher-led) with diverse partners on grades 11-12 topics, texts and issues, building on others' ideas and expressing their own clearly and persuasively.

SL.11-12.2 Integrate multiple sources of information presented in diverse formats and media (e.g., visually, quantitatively, orally) in order to make informed decisions and solve problems, evaluating the credibility and accuracy of each source and noting any discrepancies among the data.

SL.11-12.3 Evaluate a speaker's point of view, reasoning, and use of evidence and rhetoric, assessing the stance, premises, links among ideas, word choice, points of emphasis and tone used.

SL.11-12.4 Present information, findings and supporting evidence, conveying a clear and distinct perspective, such that listeners can follow the line of reasoning, alternative or opposing perspectives are addressed and the organization, development, substance and style are appropriate to purpose, audience and a range of formal and informal tasks.

SL.11-12.6 Adapt speech to a variety of contexts and tasks, demonstrating a command of formal English when indicated or appropriate.

W.9-10.1, 11-12.1 Write arguments to support claims in an analysis of substantive topics or texts, using valid reasoning and relevant and sufficient evidence.

W.9-10.2d Use precise language and domain-specific vocabulary to manage the complexity of the topic

W.9-10.4, 11-12.4 Produce clear and coherent writing in which the development, organization and style are appropriate to task, purpose and audience.

Content Knowledge: a compilation of content standards and benchmarks for K-12 curriculum by McREL (Mid-continent Research for Education and Learning).