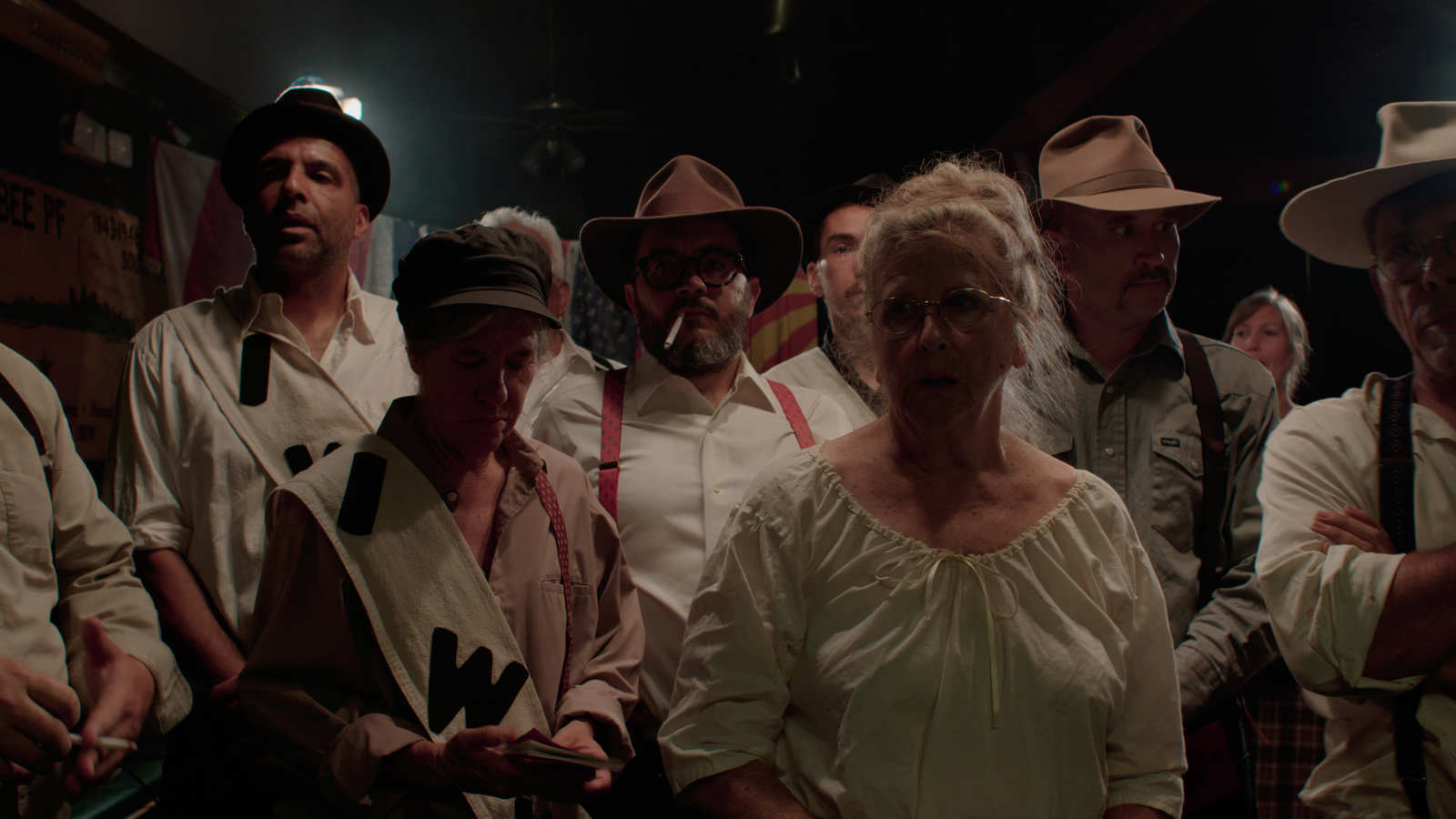 What are Fernando, Laurie, Annie, Sue Ray and the other residents of Bisbee doing now? What did they think of the film?

Fernando, Laurie, Annie and the Rays are all still in Bisbee or very close by. These folks - and many others in the film - are probably Bisbee lifers, for better or worse. If you come from a mining family, like Annie, Sue or Richard Hodges (who played Sheriff Wheeler), it’s hard to leave a place where your family has such a legacy. For people like Laurie and Fernando, who came to town more recently, the allure of this beautifully strange enclave can be just as powerful. And it’s a town full of people with very strong opinions! So it kind of shocks me, as we head back to town for the 102nd anniversary of the deportation, that I know of only a handful of townspeople who didn’t like the movie. Mostly the response has been incredible; the catharsis and working through of historical trauma that we hoped would develop after we all came together to do this crazy thing has very much materialized. “This story can never be buried again,” as one person put it. But it’s Bisbee, a place not known for people agreeing! I’m looking forward to engaging with a few folks I know have some “feedback” for us. That energy is what makes the place great. Lucky for us we know Fernando, Laurie, the Rays, Richard, Mike, Charles, Becky, the Graemes and most people who were a part of this process really enjoyed the film.

The centennial in Bisbee '17 took place two years ago— are the residents still finding ways to commemorate and process this history? In what ways do you think this process of collective healing continues in Bisbee today?

Last year we were back for the 101st anniversary of the deportation to premiere the film in town and host a day of conversations to keep pushing with this process of opening up the once-buried story of the deportation. This year we’re heading back to Bisbee for the anniversary and we’re hosting another day of talks. We plan to do this going forward as a continued commitment to healing. But our efforts are just part of what’s going on in town. It’s important to understand that, with the centennial, the townspeople were ready to finally deal with this open wound and would have done so even without our presence. We merely amplified the healing and, with the the reenactment of the events of that dark day, provided another, perhaps more directly emotional, means of working through. What was started by our collective efforts two years ago continues today. A tale that was once barely spoken about gets shared every single day now in Bisbee, citizen to citizen. Laurie, Charles, Mike, Annie, Steve, Sue, Becky and everyone else with a desire to share the story continue to find ways to create understanding and empathy and we’re proud to continue to help them.

You talk about the reenactments in Bisbee '17 as a way to work through collective trauma, engaging residents who are connected deeply to the history of this town. What was the process like working with them to create these reenactments? Were there any challenges?

The process was highly collaborative. We started with a conceptual framework - a basic idea that we’d been working towards with the last several films, about the potential of nonfiction performance to allow a way to work through complex emotional realities. Then we worked closely with our friends in town to get to know their stories and how they directly or indirectly related to the stories of the deportation. Simultaneously, we were working with our historical advisor Katherine Benton-Cohen to create scenarios that expressed the historically accurate, complex movement from the calling of the IWW strike to the deportation just a few weeks later. Then we wove these different threads together, always ready to respond to on the ground developments as the present day story unfolded. This meant essentially planning a fiction film with many moving parts and a lot of collaborators, while also following those same folks as documentary subjects. There were all kinds of challenges for this complex process, but we were ultimately guided by the same instinct as any documentarians - the people’s stories mattered most. We just also got the chance to put on a show with them.

Bisbee '17 shows the complex tension between residents who have differing beliefs in how they should be reckoning with (or letting go of) Bisbee's past. Do you think that the film has shifted that in anyway?

There remains complex responses to what happened, mostly out of folks’ desires to maintain the tricky historical perspectives of a true company town. But we felt like we saw a real shift after we all staged the large-scale reenactment that day in 2017. When you are carrying a gun and throwing your actual neighbor onto a cattle car - even if the gun is a prop and the train car a stage - you can’t help but feel the horror of what occurred that day. So in that way, I believe the film helped bridge the gap between differing views on the deportation. In the July sun, on that 100th anniversary, we all knew how wrong it was. And seeing these scenes being replayed on big and small screens across the world for the past year and a half since the film premiered has only helped magnify the clarity of the atrocity that happened with the deportation. Everyone who participated gets it.

We are working on a new film about a sensitive subject that will be the next step for us in terms of testing the limits of how collaborative documentary with elements of performance can help people work through trauma and find some measure of catharsis. It’s early but we’re very excited.