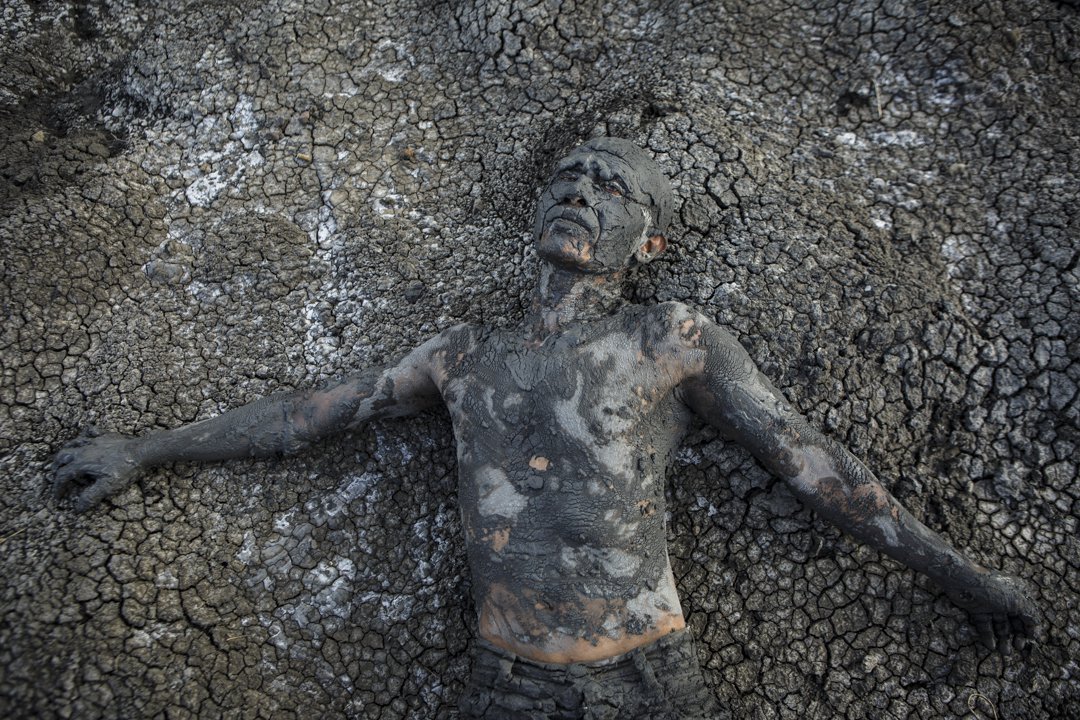 Coming of Age in the Shadow of a Decade-long Mud Tsunami in ‘Grit’ premiering Monday, September 9, 2019

Villagers mount a ten-year fight for corporate accountability in the face of one of the world’s largest and little known environmental disasters.

When she was six years old, Dian heard a deep rumble and turned to see a tsunami of mud barreling towards her village. She remembers her mother scooping her up to save her from the boiling mud. Her neighbors ran for their lives. Sixteen villages, including Dian’s, were wiped away.

More than a decade after the catastrophe, the mud continues to ravage the land. Mud and toxic gases erupt daily destroying everything in their wake. The New York Times estimates the mudflow will continue for another 8 to 18 years. Nearly 60,000 people have lost their homes. The once-thriving region has been transformed into a desolate wasteland Dozens of factories, schools and mosques are now submerged some 60 feet under a moonscape of cracked mud.

While trying to rebuild their lives, the survivors band together to fight for justice against Lapindo, a multinational company whose natural gas drilling is suspected of unleashing the flow of hot sludge.

Waiting for compensation from Lapindo, the survivors live in makeshift rented homes in the shadow of levees that hold back the compounding mud. Despite the growing threat of the levees giving way, the villagers have turned the disaster site into a popular tourist destination. Dian’s mother has reinvented herself as an unofficial mudflow tour guide in order to make ends meet. She spends her days guiding curious Indonesians across the wasteland so the tourists can snap photos of the boiling muck and thick steam that spurt violently into the sky. The vast lunar landscape is littered with bizarre activities: fashion photographers take stylish photos of models posing in ball gowns; vendors sell selfie sticks; protesters smear mud over their bodies in acts of resistance.

Dian is determined to rise out of her muddy life. She and her mother, along with many neighbors, demand justice and join the fight to ensure Lapindo is held accountable. The film bears witness to Dian’s transformation into a politically active teenager as she questions the role of corporate power and money in democracy.

“This film compels us to look at the lies and corruption that swept an entire community of people under the rug,” said Chris White, executive producer for POV. “In looking at individual lives among the vast numbers of people affected by Lapindo and the government’s response, the film prompts us to explore beyond the material damages of the disaster to the intangible destruction of a community.”

CYNTHIA: I was in Indonesia in 2012 and someone there said to me, “if you want to consider a new topic for a documentary, you should look into the mudflow.” I thought -- what? I’d never heard of the disaster before. I visited the mud site for three days and conducted initial interviews on film, and gathered enough material to make a three-minute film teaser.

It took a year to put the crew in place, and to find my co-director Sasha Friedlander, who grew up partially in Indonesia, worked as a journalist there, and is fluent in Bahasa. Then it was another five years of fundraising and production. We worked with both an Indonesian and US crew.

SASHA: I lived in Indonesia between 2007 and 2009, working for the Bali Post as a journalist and translator. During that time I’d covered the devastating story of the Lapindo mudflow in East Java and I remember feeling moved and inspired by the protests mounting against the gas drilling company. Because the owner of that company was a key political figure in Indonesia, the government heavily censored the stories that were coming out in the news, so the coverage never left the archipelago.

When I received an email from Cynthia in May 2013 about the possibility of collaborating on a film about the mudflow, it was the first time I’d heard the story mentioned since I left Indonesia in 2009. I knew that there was a presidential election coming up in 2014, which offered a glimmer of hope for the mudflow victims who were still waiting for their reparations from the drilling company. I was excited to get back to Indonesia and learn more about the situation through the lens of the activists. Cynthia and I hoped to make a film that would resonate with a Western audience. During the six years that we were filming Grit, we could never have imagined how many parallels would emerge between this story in East Java and the issues here in the US.

Our hope is that audiences will leave the theater with a better understanding of the world’s largest Muslim country. We want people to think about the urgency for political engagement, the importance of women in leadership roles, and the power of art and perseverance in social and environmental struggles. It’s hopeful that we’re seeing young people stepping up and demanding change worldwide. After watching this story unfold, we hope audiences are inspired to cultivate their own determination, their own grit.

Cynthia Wade’s 2008 documentary Freeheld won a 2008 Academy Award for Best Documentary Short Subject, Special Jury Prize at the Sundance Film Festival, and 13 other awards. She was a lead producer on the 2015 fictionalized adaptation of Freeheld, starring Julianne Moore, Ellen Page, Steve Carell and Michael Shannon. Wade’s 2013 HBO documentary Mondays at Racine was nominated for an Academy Award in 2013. She is the director of the documentaries Grist for the Mill (1999, HBO), Shelter Dogs (2004, HBO), Born Sweet (2009), Living the Legacy (2009, Sundance Channel) and Generation Startup (2016, Netflix), and producer of The Gnomist (2015, CNN). She holds a BA from Smith College and an MA in Documentary Film Production from Stanford University. Wade’s films have collectively won more than 50 film awards worldwide.

Sasha Friedlander directed, produced, shot and edited the feature-documentary Where Heaven Meets Hell. The film, set in East Java, Indonesia, won numerous prizes including Best Feature Documentary Film at the LA Asian Pacific Film Festival, Hawaii International Film Festival and Special Mention for Outstanding Cinematography at the LAAPFF. At the One World International Human Rights Film Festival in Prague, the Václav Havel Jury gave a Special Mention Award to Where Heaven Meets Hell for its “exceptional contribution to the defense of human rights.” The Alliance of Women Film Journalists awarded Sasha an EDA Award for Documentary Artistry in March 2013. This ITVS-funded film aired on PBS in 2013. Sasha has lived and worked in Indonesia. She is fluent in Indonesian and worked there as a journalist for several years. Sasha holds a BA from UCLA and an MFA in Social Documentary Film from the School of Visual Arts.