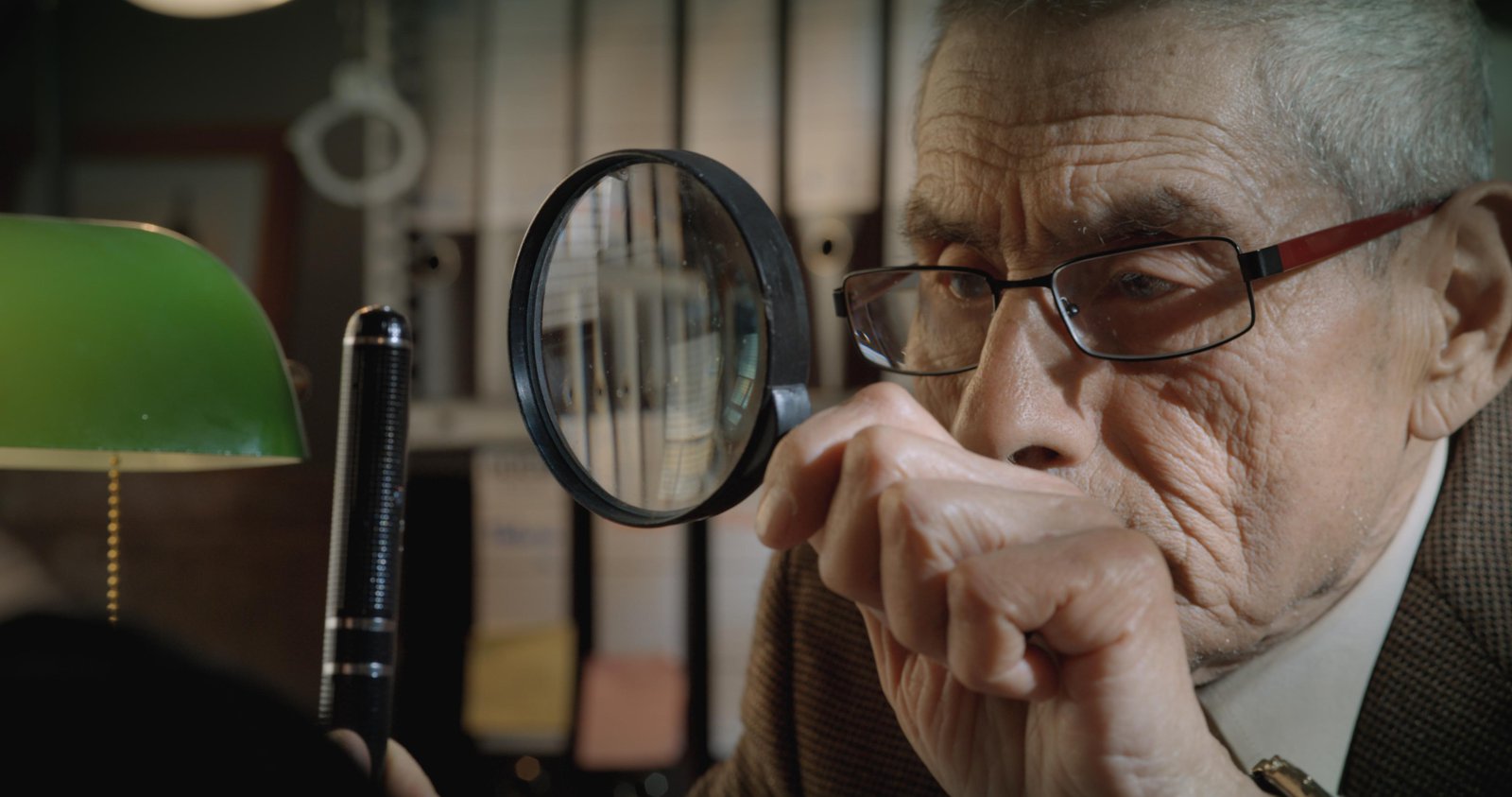 “The most heartwarming spy movie ever made.” — Eric Kohn, IndieWire

“A refreshing, beautifully made documentary set in a nursing home under suspicion of elder neglect, Maite Alberdi's The Mole Agent begins with its tongue in cheek but grows quite moving by its end. Structured with a brilliant eye for narrative development and telling character detail.” — John DeFore, The Hollywood Reporter

Named one of the Best Documentaries of 2020 by IndieWire and recently announced to be Chile’s submission to the 93rd Academy Awards in the category of Best International Film, The Mole Agent follows 83-year-old Sergio Chamy who is sent as an undercover spy to a Chilean retirement home to track suspected elder abuse. Through the lens of the hidden camera in his decoy glasses, viewers watch as Sergio struggles to balance his assignment with his increasing involvement in the lives of several residents. Along the way, as he himself tires of the deception at the core of the story, the documentary becomes an honest and unexpected meditation on aging and human connection, all while disguised, at least superficially, as a playful noir spy movie.

Placing the nursing home and its varied residents at the heart of her latest documentary, Alberdi amplifies and pays due respect to the rich inner worlds of those members of society wrongfully categorized as burdens to their families and communities. Over the course of the Covid-19 pandemic, retirement homes have become hotbeds of infection. The documentary thereby humanizes a situation that has only become more dire since the start of the health crisis, providing a portal into a world largely hidden, by nature, from public view.

The Mole Agent takes viewers into the San Francisco Nursing Home through the perspective of Sergio, giving life to its long-term residents as captivating, heartwarming, and entertaining characters through Alberdi’s particular brand of documentary filmmaking. By employing strategies that bring viewers into more intimate connection with the plotline while also abiding by traditional techniques of non-fiction filmmaking, Alberdi allows her audience to become invested in the lives of the people on screen in a refreshing and ethically-sensitive way. The result is a novel form of documentary that pulls the audience into a moving tale only to reveal that, despite the too-good-to-not-be-scripted atmosphere, it’s been real life all along.

Through her careful directorial sleight-of-hand, Alberdi deftly explores the metrics of loneliness and isolation felt by society’s most vulnerable demographic — the elderly. An unexpected reflection on the nature of loss and human relationships, The Mole Agent reminds all of us of our collective responsibility towards our communities’ oldest members — a commitment made all the more urgent in the context of today’s global pandemic. Her latest project once again confirms Alberdi as an established innovator in the field of international documentary.

“Maite’s films look and feel different from others. She uses a soft touch and an artist’s palette to bring us intimately into the lives and worlds of her protagonists. Her work goes beyond observational cinema to achieve the authenticity of that form, but with the composition of a well-styled fiction film," said Justine Nagan, Executive Producer of POV | Executive Director, American Documentary. "She finds the sublime in the ordinary, and commonality in the exceptional. At POV, we were eager to partner on this new doc as Maite was pushing herself creatively to new heights. We couldn’t wait to bring this beautiful work of cinematic art to American audiences on PBS.”

"I think that a documentary has to invite understanding, tolerance, and empathy. These can be generated or changed through cinema that allow viewers to connect to everyday experiences and bring us closer to worlds that we do not know," said director Maite Alberdi. "I was interested in filming the elderly because they’re a group that allows us to build both universal and individual stories. Universal because we can all relate to different aspects of the story, and individual because the subjects whose stories are being told are affected by the difference in their age and the unique experiences that they then live. Sergio is willing to live a new life, meet new people, and listen. In his role as a detective inside a nursing home, he teaches us not to judge, nor to set limits, even when you are 85-years-old. He taught me to be open to experience without prejudice."

AlreadyThe Mole Agent has made its way onto several prestigious Best Documentary lists, including The Playlist’s “The 20 Best Documentaries of 2020,” and IndieWire and Hammer to Nail’s “Best Documentaries of 2020.” The film received the Audience Choice Prize at the Cinema Eye Honors, where lead Sergio Chamy was also recognized in The Unforgettables category and composer Vincent Van Warmerdam was nominated for Outstanding Achievement in Original Music Score. The Mole Agent secured a position in the Winner’s Circle at last year’s edition of DOC NYC, landed on the IDA Documentary Awards Features Shortlist, and won the The City of Donostia / San Sebastian Audience Award for Best European Film in 2020.

Maite Alberdi studied Film and Aesthetics at the Universidad Católica de Chile. She is a writer-director who has developed a highly particular style that achieves an intimate portrayal of the characters she works with through everyday stories in small-scale worlds.Alberdi has written and directed three documentary feature films (The Grown-Ups, Tea Time, and The Lifeguard) and three documentary short films (“I’m Not from Here,” “The Hairdressers,” and “The Trapeze Artists”). In 2011, Alberdi premiered her first and noted feature film, The Lifeguard, at IDFA. Through Micromundo, her production company, she directed her film Tea Time (funded by: ITVS, Berta Fund, Tribeca Film Institute, FFA, CORFO), which premiered at IDFA 2014 and broadcasted during POV season in 2015. Tea Time has received the following awards: AWJF-EDA Best Female-Directed Documentary IDFA, and Best Documentary Award at Miami International Film Festival, EIDF-EBS Korea, DocsBarcelona, FICCI Cartagena, FICG Guadalajara, SANFIC Santiago, among others. In 2016, Alberdi premiered her short film “I’m Not From Here,” which won Best Short Film at Visions Du Reel 2016 and was given the Krakow Short Film Nomination for The European Film Awards 2016. In November 2016 she premiered her film The Grown-Ups in the official Feature Length Documentary Competition at IDFA.Alberdi works as a documentary teacher at the Universidad Católica de Chile, and is co-writer of the book Teorías del cine documental en Chile: 1957-1973, or Documentary Film Theories in Chile: 1957-1973.

Marcela Santibáñez is a Fulbright Scholar who studied film at the Universidad Católica de Chile. She acquired her MFA in Film Producing at UCLA’s School of Theater, Film and Television in 2014.Santibáñez created and produced the Television Show Chile Suena, which premiered on national TV in 2014 and was the winner of the Chilean National TV Fund. She also worked in the marketing department at the distribution company “BF Distribution.” From 2012-2014 Santibáñez resided in Los Angeles. During her stay, she interned at Participant Media and Tugg Inc., and was one of the producers of the Television Pilot Doubleblind, winner of the 2013 “Outstanding Student Program Television/New Media” Award. During her stay she also produced three short films, including “Age of the Moon,” part of the upcoming James Franco omnibus, “Palo Alto: Killing Animals.”Upon her return to Chile, Santibáñez started working as a Producer at Micromundo, director Maite Alberdi’s production company. She was in charge of the Goya Awards campaign for the 2014 film Tea Time, and produced the documentary Flow from director Nicolás Molina, which premiered at Sheffield Doc Fest 2018. Since 2019, she has been the director of programming at FIDOCS, the Santiago International Documentary Film Festival, and is the producer of the upcoming feature The Mole Agent, which will premiere in the World Documentary Competition at The Sundance Film Festival 2020.

Languages: In Spanish with English subtitles

Produced by American Documentary, POV is the longest-running independent documentary showcase on American television. Since 1988, POV has presented films on PBS that capture the full spectrum of the human experience, with a long commitment to centering women and people of color in front of, and behind, the camera. It was on POV that American television audiences were introduced to groundbreaking works like Tongues Untied, The Act of Killing and American Promise and innovative filmmakers such as Jonathan Demme, Nanfu Wang and Laura Poitras. In 2018, POV Shorts launched as one of the first PBS series dedicated to bold and timely short-form documentaries.Over a generation, POV has championed accessibility and innovation in nonfiction storytelling. POV Engage works with educators, community organizations and PBS stations to present hundreds of free screenings every year, inspiring dialogue around today's most pressing social issues. The series' interactive arm, POV Spark, creates and advances experiential forms of storytelling and programming, redefining U.S. public media to be more inclusive of emerging technologies and interactive makers.POV films and projects have won 38 Emmy Awards, 25 George Foster Peabody Awards, 14 Alfred I. duPont-Columbia University Awards, three Academy Awards and the first-ever George Polk Documentary Film Award. Learn more at pbs.org/pov and follow @povdocs on Twitter, Instagram and Facebook.