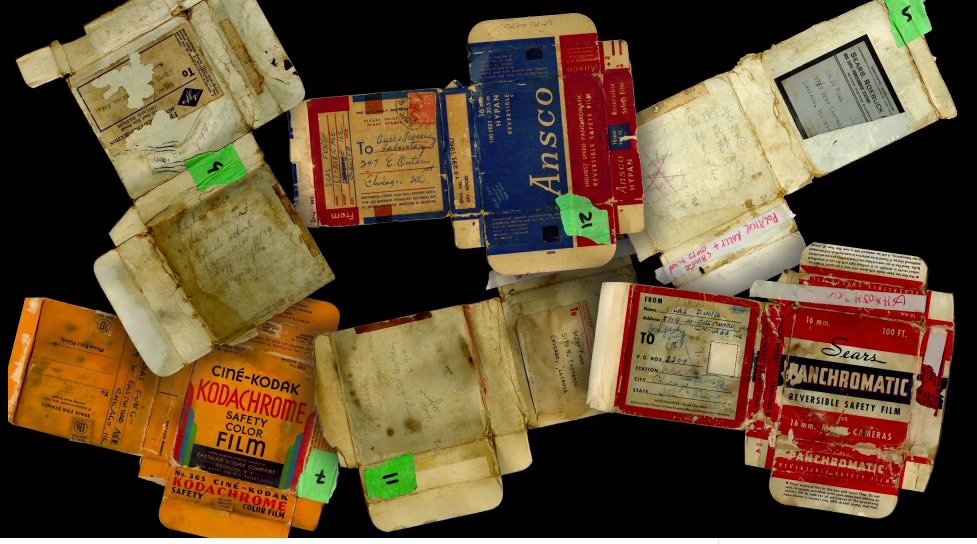 Filmmaker Ali Kazimi, of Random Acts of Legacy, discusses the road to the discovery and restoration of a rare cache of vintage footage.

Since 2007 I have been developing a film about my paternal and maternal grandfathers. It’s a challenging task because like almost all people in India there are no home movies in our family. What started as a quest for found footage to use in the making of a family memoir suddenly took a dramatic turn when some home movies “found me.” While searching eBay, I came across a listing for home movies of a Chinese-American family. The seller had posted a frame grab shot off a projected image on a wall. He had also posted a photo of the mailing box.

The photo of the box offered some solid clues: there was a name, Silas Fung; an address in Chicago; a date, 1944; and the location, Banff, Canada. I was immediately intrigued by the image of a middle-aged impeccably dressed Chinese-American woman in this iconic landscape in the Canadian Rockies. My years of experience exploring archives in the United States and Canada had made me acutely aware that moving images of communities of color were incredibly rare, particularly of Asian communities (Chinese, Japanese and South Asian).

The growth of filmmaking in the twentieth century coincided with exclusionary immigration laws in both the United States and Canada. Both countries used similar yet distinct means to ensure that they remained a “white man’s country”. While Asian immigration on the west coast was being curtailed, both countries were vying for millions of white settlers from Europe. Chinese immigration to both countries was based on Chinese men being seen as a source of cheap labour, and legal frameworks were created to discourage entire families from arriving. Once the demand for cheap Chinese labour dried up, immigration from China was virtually brought to a halt in both countries by the mid twenties through exclusionary laws. Faced with racial barriers in all walks of life, many Chinese carved out a niche running laundries or restaurants.

Knowing this historical context, my excitement grew – who were the Fungs and what were they doing in Banff? The seller had also put on auction other reels from the same family and each frame grab from the films revealed more members of the Fung family. Astonishingly, all the home movies were filmed in the 16mm format.

In 1923, Kodak introduced an acetate-based 16mm film stock for the home market and for the first time ordinary people, provided they could afford it, could buy cameras, film and projectors to document themselves. Home movies, as they were dubbed after a magazine of the same name, soon became an all-American phenomenon. The Fung home movies were all 16mm; clearly, this was a wealthy family.

I wanted to learn more about Silas H. Fung, whose name I had previously noticed on photographs of the shipping boxes for the film. A quick internet search increased my growing sense that I had stumbled upon something quite remarkable. Silas Fung appeared to have been a well-known collector of memorabilia from the Chicago World’s Fair of 1933-34.

Most home movies that are sold in yard sales, flea markets, antique shops or online rarely if ever, have names attached to them. Within the area of film studies they have been dubbed “orphan films”. The films I had stumbled upon did not just have a name; there was a verifiable history, albeit brief, of Silas Fung. Far from being orphaned, these films literally had a clear paternity!

I had a gut feeling there was larger story here, I started bidding on the films and after winning the first few, the seller informed me that he had 28, 100-foot reels. I told him that I wanted to buy the entire archive rather than see it broken up. He agreed.

When I received the films, I was excited to see there was some early colour film, Kodacolor from 1941, an era we mostly know through black-and-white archival images. But as soon as I started opening the metal cans, I knew that there were issues: many of the reels were rusted and the film stock itself was not only warped but also appeared to have been water-damaged. The film in other cans had lost all its elasticity and had become brittle.

My training and early experience as a filmmaker had been using 16mm, so I could see right away that much of this material would not only not run through a projector but it also might not even run through high end film-to-digital video transfer machines. There was another issue, one I had never encountered: when I opened each can, there was an overwhelming smell of vinegar. Research revealed that when films are stored in hot and humid conditions, their acetate base starts turning into acetic acid, i.e. vinegar. The vinegar syndrome is irreversible. I was crestfallen, to say the least, but still hoped that there might be way to salvage the images.

A few years went by and I acknowledged I had hit a wall — nothing could be done with the material. But, finally, I got a lead to an engineer who had figured out a way to transfer home movies to video. His method involved taking a still photo of every frame without using sprocket holes that are required by professional methods. I told him the state of the material I had, and while he said it could be done, there was a chance that I might lose some or all of the material.

A few weeks later, I got back the digital folder of the first reel; it contained hundreds of JPEGs of every frame on the 16mm reel. Early cameras, like the ones owned by Silas Fung, had a spring-wound mechanism, and ran at a somewhat steady speed of 16 frames per second. A standard 100’s roll of film would last just over 4 minutes at this speed – and there was no sound recording. Later, with the advent of sound, the standard speed was raised to 24 frames per second. In his day, Silas would have projected the film using a film projector also designed to run at the same speed as the camera. When film shot at 16 frames per second is improperly transferred at 24 frames per second, people appear to move in an odd, often comical sped-up manner. One can still see this in uncritically used archival material.

The test footage had been transferred at the correct speed and it was remarkable to see material from 1936 in high definition. To say I was thrilled would be an understatement; a major hurdle had been overcome. A couple of months later all the footage had been digitized, including all of the most distressed and degraded material.

The deteriorating emulsion and the way in which some images refused to disintegrate while others dissolved into abstract clusters of grain seemed to have its own magic. The texture and imperfections accrued in many ways through time revealed the physical object, i.e. the film stock. Water damage at times ate away at the edges of frames, threatening to obliterate the entire image; at other times people morphed in and out of a seemingly fluid smear of churning emulsion. The decaying film seemed analogous to memory.

It was later revealed to me that part of the secret process of digitizing the damaged film had been to soak it in a pail of WD40. I mentioned this to a film archivist and he told me that in the seventies, they did run films through WD40 to bring back plasticity in old and brittle film stock.

Now I could focus on the images; they were for the most part really well composed by Silas Fung. Also, unlike the majority of amateur filmmakers, Silas clearly understood film language, holding on shots long enough and with a remarkably steady hand, and ensuring continuity from one shot to the other while editing on the fly in-camera. The seemingly ordinary, quotidian details of an American family, complete with birthday parties, community picnics, dinners, beach vacations and the like, were made extraordinary by the fact that this was the archive of a wealthy Chinese-American family in Chicago from 1936 to 1953.

It was clear that the material challenged racist stereotypes that were prevalent in the popular culture of the era and also offered the possibility of a new perspective on middle class Chinese-American family life during the exclusionary period.

What started as a quest to find footage that could illustrate my family history was reversed; I had found footage of a family that had been stripped away, for reasons unknown, from the family of origin. And then, thanks to the small but remarkable Chinese American Museum of Chicago, I connected with the only surviving member of the Fung family seen in these films – their daughter Irena Lum. She was surprised not only that I had found the film, but that I had chosen to seek her out. As we chatted for the first time, she became more enthusiastic. Finally, she said, “You’d better come and talk to me quickly. No one else is going to know who those Chinese looking people are. I’m the last of the Mohicans.”

As I looked at the finished film, I realized that truly impossible odds had connected me to the original footage, the digital transfer of the material and the final reconnection with the family through Irena Lum. In end, the film became a proxy for what I might have done with the home movies of my grandparents. It was truly a random act of legacy.

Random Acts of Legacy is currently streaming online for free.

AMERICA REFRAMED airs Tuesday nights at 8/7c on WORLD Channel. Streaming of the film begins the day after the broadcast on worldchannel.org and all station-branded PBS platforms including PBS.org, and on PBS apps for iOS, Android, Roku, Apple TV, Amazon Fire TV and Chromecast. Episodes of America ReFramed will also roll out weekly on-air and online on Link TV (Direct TV channel 375 & Dish Network channel 9410).