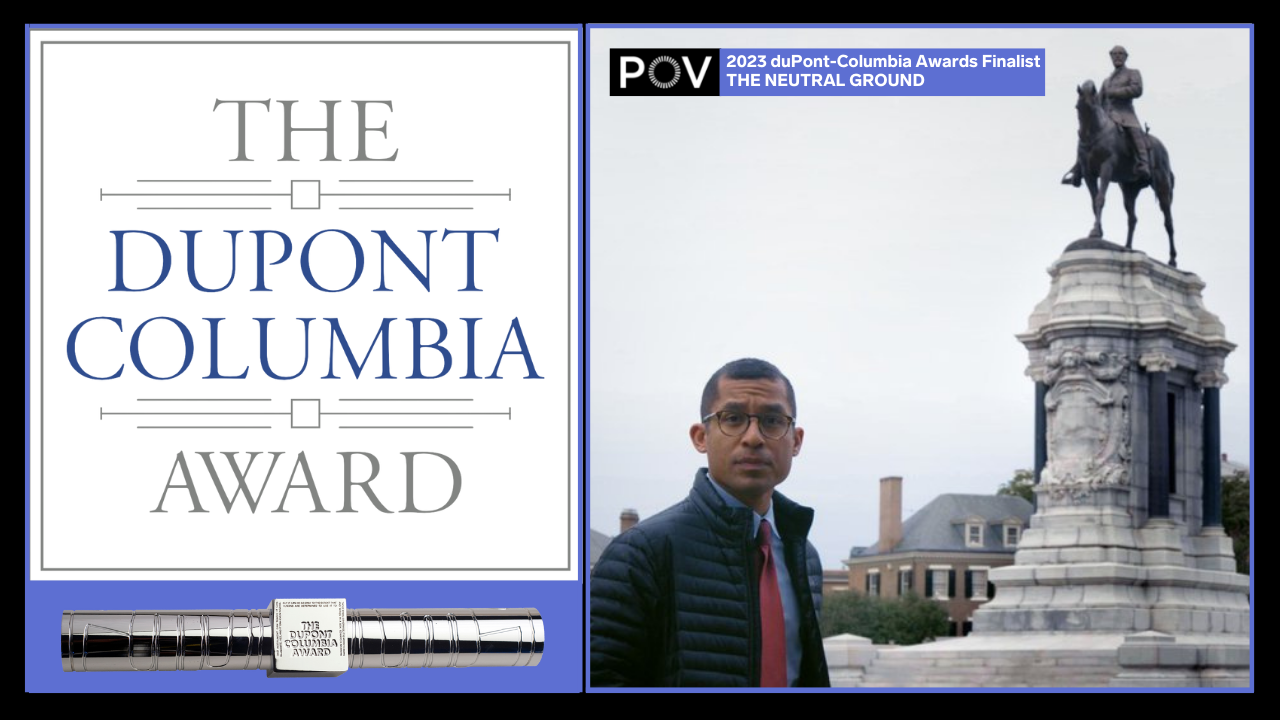 New York, N.Y. – November 4, 2022 – The Alfred I. duPont-Columbia University Awards announced yesterday that American Documentary | POV’s film The Neutral Ground is a finalist for the prestigious award which celebrates the best in journalism across audio, video, broadcasting and documentary platforms. POV, currently celebrating its 35th anniversary season, is America’s longest running non-fiction series. POV's broadcast partner, PBS, leads all nominees with five nods. To date, American Documentary has won 15 duPont-Columbia Awards, most recently for Softie and Through the Night in 2021.

The full list of the 2023 dupont-Columbia finalists is available here. The winners of the award, presented by the Columbia Journalism School, will be announced at a ceremony on February 7, 2023.

The Neutral Ground, directed by CJ Hunt (The Daily Show with Trevor Noah alum), executive produced by Roy Wood, Jr. (The Daily Show with Trevor Noah, Confess Fletch) and produced by Darcy McKinnon (Maquilapolis), is a feature-length documentary about the lingering effects of Confederate symbolism on America. It follows writer and comedian CJ Hunt as he documents New Orleans’ fight over monuments and America’s centuries-long relationship with the Lost Cause. After witnessing the struggle in his adopted city, CJ expands his scope to the country at large, bringing to light the fabricated histories born out of the Civil War and the hard truths much of America has yet to face about slavery. He ultimately sets out to understand why a losing army from 1865 still holds so much power in America. The Neutral Ground is a One Drop Pictures, American Documentary | POV, ITVS co-production in association with the Center for Asian American Media. It is a co-presentation of Black Public Media and the Center for Asian American Media.

The Neutral Ground debuted at the Tribeca Film Fest on Juneteenth 2021 with a conversation between CJ Hunt, Nikole Hannah-Jones (The 1619 Project), and Roy Wood, Jr. It was awarded special mention at Tribeca for "the way their use of humor brought audiences into a difficult subject, with vulnerability, authenticity, and at great personal risk." The film has gone on to be awarded “Best Documentary” at The American Black Film Festival and “Best Southern Documentary” at Hot Springs Film Fest. The film made its broadcast debut as the premiere episode of POV's 34th season on PBS in July 2021. The Neutral Ground received a 2022 News & Documentary Emmys Award nomination, as well as nominations from The International Documentary Association and Critics' Choice Awards.

For more than three decades, POV has worked hand-in-hand with filmmakers to elevate the documentaries that inspire us, educate us and entertain us. POV films and projects have won 46 Emmy® Awards, 27 George Foster Peabody Awards, 15 Alfred I. duPont-Columbia University Awards, three Academy Awards and the first-ever George Polk Documentary Film Award and the Prix Italia, since its launch in 1988. The POV series has been honored with a Special News & Documentary Emmy Award for Excellence in Television Documentary Filmmaking, three IDA Awards for Best Curated Series and the National Association of Latino Independent Producers (NALIP) Award for Corporate Commitment to Diversity.