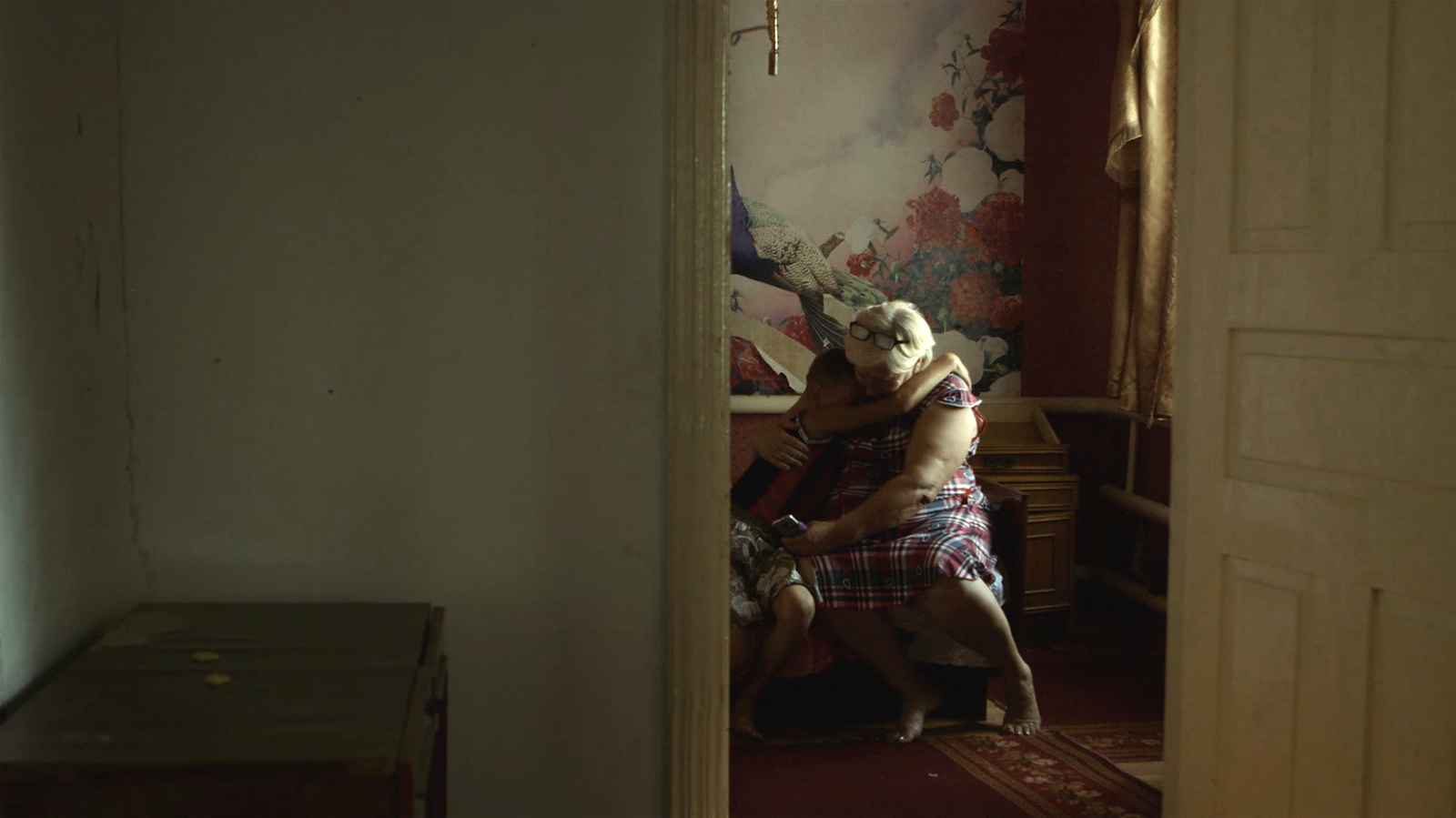 Where are Oleg, Alexandra, Yarik and Kostya now? What did they think of the film?

Oleg, Alexandra, Yarik and Kostya really love the film and have been a big part of the release of the film. Oleg, Alexandra and Yarik still live in the village, where the kids attend school, and Alexandra continues to take good care of them. So everybody is doing quite fine, despite the ongoing war. Kostya has a girlfriend, and he is studying at a college in Mariupol.

How did you come to make this film with Oleg and Alexandra? Did you always plan to follow Oleg, and how did that decision come about?

I made two short documentaries just before The Distant Barking of Dogs, and they both featured children who lived very normal and stable lives. The films each follow a child’s individual struggles to restore stability in a world temporarily thrown off balance.

Having done these shorts, I couldn’t stop thinking about the converse of that premise: how children in very unstable and dangerous parts of the world struggle to find some sense of fleeting stability and comfort. That’s what ultimately led me to Eastern Ukraine and Oleg.

Going there, I initially planned to make a film about what growing up in the shadow of war does to a child. That is, how a child is affected by living in a place where the war is being fought out just beyond the hills in the horizon. This is a sad reality for many children in the world’s conflict zones, and I wanted to give the kids caught in this particular conflict a voice too. As it happened, the war swept up close and over us during the filming, so the film grew to also become a film about what growing up in the midst of war does to a child, and how crucial family and close personal relationships are if you are to survive with as few inner and outer scars as possible.

As I travelled down the southern part of the frontline with my fixer, I asked all the kids I cast to tell me what it felt like when they were afraid, and none could really answer that question. That is, until I met Oleg. He hesitated for maybe a heartbeat, reflecting, and then looked straight at me with those ice-blue eyes and said, "It’s like there is this cold hand reaching into my chest, grabbing my heart, and when the first shells starts to explode, the hand starts squeezing it, little by little, until my heart is a little, cold lump. That’s how I feel, when I am afraid." And that was it for me. I knew I had to make a film about this child and his grandmother Alexandra.

The Distant Barking of Dogs spans a year in the life of Oleg in eastern Ukraine. Throughout it, we see the impact that growing up in a war zone has on the children, and how the sounds and presence of war seem to become part of the normalcy of their everyday lives. What was it like to be part of this for a year while making the documentary? How much was your process shaped or limited by the conflict happening nearby?

It was a often a rather surreal feeling, as you at one hand have this little depopulated village with people quietly getting on with their lives and on the other hand there's fighting going on at the frontline of the war just on the other side of the town hill. One of the biggest challenges was to keep taking the danger seriously and not become lulled into a false sense of security by the days of silence, or become a little too casual towards the sounds of war because you think you know the lay of the land. I remember a night near the end of the filming. We had all eaten a beautiful dinner outside of Oleg and Alexandra’s house in the garden. The food was wonderful, the night was warm, and we had been telling jokes and laughing a lot. It had become late, and I was tired, so I wondered where our driver was, because he should have been there at this time to pick us up. When I asked my fixer, he explained that the driver called, and that he was detained at the checkpoint due to heavy shelling in area. I realized that both sides had been shelling each other for most of the evening and that we had simply stopped noticing or reacting to it. That scared me.

What has the conversation within the larger Ukrainian population been surrounding the armed conflict between pro-Russian separatist forces and the Ukrainian government? How does The Distant Barking of Dogs fit into the discussion?

I have generally refrained from commenting upon my personal and/or the films political views or biases.

This is first of all because the war is still going on, and in reality I don't know, if Oleg and Alexandra's house will be on the Ukrainian or the separatist side tomorrow. The frontline does actually move from time to time. So if the film or I would chose a side so to speak, we would inadvertently by simple association risk taking Oleg and Alexandra "hostage" by our political stance. That could potentially put them in danger, and I will never ever risk that.

Also, I learned very quickly in the beginning of the filming process, that as soon as I started asking about politics all doors slam shut in these areas. So I simply stopped asking, and believe it or not, I have never asked Alexandra about her political views, so I honestly don't even know.

Due to The Distant Barking of Dogs I have been granted absolutely unique access to a very special place, and I am currently in the process of making a new film from this place. But all I can tell you is that this film is also taking place in East Ukraine. We are well into development and we hope to have the film ready by January 2021, so keep an eye out for it.