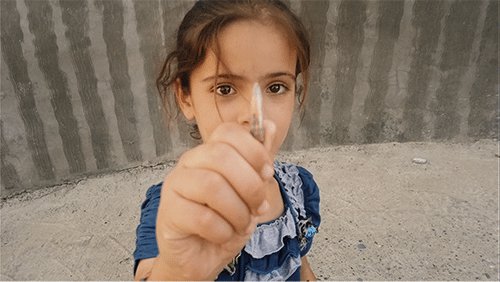 Has the Nori seen the film? What does he think?

He has seen the film. He liked it, but was a bit disappointed that all the people we had been working with were not in the final film, as he felt their stories were just as important. But due to the capacity and length restrictions we couldn’t include their stories, especially since the focus was to be on his development. He understood this.

Can you give us an update on Nori and his family?

He is still living in the same caravan where we left him in the film—at the Sa’ad IDP camp in Baquba province. He is still living with his family. He is working in the IDP camp’s health clinic, and his children are attending school. Since completion of the film they have had one more child, a girl.

What inspired you to create this film?

The war in Iraq was something I just could not turn my back to. Originally I am from Iraq myself. Initially we wanted to make a different film, but as the situation was in constant change, also with the US withdrawal, the story pulled me in more and more. The changes in Iraq were big and Nori’s life being affected by these changes made it necessary to make this film.

How does Nori’s story reflect others’ stories in the same situation?

Nori gives a face and a voice to hundreds of thousands of internally displaced people that we seldom hear about. Their stories are similar. Mainstream media does not cover these stories, and too many they are just numbers. Through Nori we get an insight to the reality that many people are living still today; a reality they never asked for.

More than 15 years after the U.S. invasion of Iraq and almost seven after the withdrawal of troops, how has the country's situation changed?

For me, there is no simple way to answer this question, because the reality in Iraq is complicated. There are good and bad side effects from the invasion and the withdrawal, but personally I think the withdrawal was too sudden and too soon. One thing is that a big dictator has been removed. The Saddam Hussein regime is no longer. All the regional and internal challenges of a country run by an iron hand were exposed. This however, turned to violence and the country became a playground for other regional and international powers, especially affecting central Iraq where the film took place, and later on the northern part where ISIS arose and where the Sunni/Shia conflict escalated. In the news we hear all the time about the consequences of this. Iraq as a country has never been as fragile as it is now. Perhaps in a few years we can expect a stronger country.

Today I am working on a new documentary about post-war Cambodia, focusing on landmines, mine victims, the regeneration of a country after a brutal war and the people who survived it.