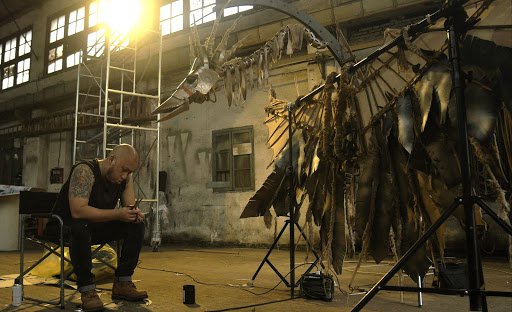 This guide is an invitation to dialogue. It is based on a belief in the power of human connection and designed for people who want to use Our Time Machine to engage family, friends, classmates, colleagues, and communities. In contrast to initiatives that foster debates in which participants try to convince others that they are right, this document envisions conversations undertaken in a spirit of openness in which people try to understand one another and expand their thinking by sharing viewpoints and listening actively.

The discussion prompts are intentionally crafted to help a wide range of audiences think more deeply about the issues in the film. Rather than attempting to address them all, choose one or two that best meet your needs and interests. And be sure to leave time to consider taking action. Planning next steps can help people leave the room feeling energized and optimistic, even in instances when conversations have been difficult.

Our Time Machineis an excellent tool for outreach and will be of special interest to people who want to explore the following topics:

ART AS PROCESS AND THEATER AS ARCHIVE

Our Time Machineopens with the H.G. Wells quote, “We all have our time machines, don’t we. Those that take us back are memories...and those that carry us forward, are dreams.” Navigating his father’s mortality and creatively working to preserve his memories, artist and son, Maleonn, turns to art as a means of processing impending loss and as an antidote to forgetting. In the multidisciplinary work, “Papa’s Time Machine,” Maleonn works to dream up and create an autobiographically-infused tribute to his parents, their shared pasts, and familial memories. “Papa’s Time Machine” also serves as a medium for Maleonn to meditate and reflect on his complex emotions related to his relationships with his parents; his responsibilities to them as they grow older; and becomes an opportunity, for him, to reconcile differences and misunderstandings through creative processing.

Theater and performance is a particularly important mode of expression in creative endeavors that seek to imitate, or provide insightful commentary on, life. Additionally, theater has a long tradition of being used as means of cultural archiving; to document lasting traditions; and to distill and celebrate many aspects of living collaboratively. We see theater doing this work in the realm of personal and familial relationships with regards to memory preservation in Our Time Machine. In one scene Ma Ke tells his son, “the relationship between collaborators is closer than father and son.” This statement offers viewers an opportunity to dig into the idea of collaboration, not only as creative counterparts, but also to reimagine familial life and relationships as creative pursuits. Maleonn, Ma Ke, and Zheng Wei Tong are already in collaboration as they consider ways to care for family, and theater serves as another pointed manifestation for participation in a shared journey.

Theater, in this film, serves as a mode to preserve and archive persona, familial memories. Theater has long been used to do similar work of cultural archiving in the United States, but to do so in the realm of civic and democratic engagement. For example, the first all Black theater company in the United States, the Free Southern Theater, became an important cultural arm of the Civil Rights Movement and later became JuneBug Productions JuneBug Productions. The theater troupe traveled through the Southeast, where they used theater as a means of educating and engaging Black southerners in the activism of the Civil Rights Movement; as well as collecting testimonies from Black southerners which would be integrated into performances. Another example of theater as a means of democratic engagement and cultural archiving can be found in the work of Roadside Theater; a branch of the Appalshop in Eastern Kentucky. Roadside began as a way to honor cultural storytelling traditions and to archive fading cultural knowledge. The current mission of Roadside remains much the same - to document, disseminate, and revitalize cultural traditions in Appalachia; to tell local stories and challenge stereotypes; and to support communities in their work towards equity in a participatory way.

While Maleonn’s aims were much more personal, we can recognize the role of theater as a mode of sustaining memories - from the hyper-local, as in familial; or the local on a political scale. The arts hold a crucial space in preservation, critical reflection, and fostering connections between otherwise disparate experiences. In Our Time Machine,we can all recognize Maleonn’s family’s journey as unique, but through the creative processing and presentation of personal narratives, find an opening through which we might find connection to our own lives.

According to the Dementia Society of America, Alzheimer's Disease is believed to be the most common form of dementia among elders. Dementia is not a disease, itself, but a term used to describe symptoms caused by Alzheimer's Disease. Dementia affects the brain and slowly deteriorates parts of the brain that control thought, memory, and language. Memory loss can manifest as forgetting things from the distant, or more recent past or forgetting peoples’ names. As this is a progressive disorder, the impacts of memory loss grow more impactful over time and people living with Dementia can forget how to carry out daily activities like brushing their teeth, paying bills, or reading and writing. While dementia most commonly impacts elders, it is not a common aspect of aging. Though, according to the World Health Organization, there are approximately 10 million new cases of dementia annually, and globally approximately 50 million people are living with dementia. As this is such a common experience, it is crucial that we consider compassionate care-based approaches to supporting people living with Dementia. Importantly, while those experiencing Alzheimer's Disease can grow increasingly anxious and frustrated as the disease increasingly impacts their daily lives, it is also quite hard on those providing care and support and important that caregivers find support in community as well.

Memory care is one approach to supporting the needs of a person with Alzheimer’s disease, and is a long-term specified treatment plan in which professional caregivers support the creation of structured routines and emotional support for those experiencing memory loss. In Our Time Machine, we get an intimate glimpse into the toll memory loss can take on a family who is caring for someone with Alzheimer’s. As Maleonn grapples with his responsibilities to his aging parents, his mother - Zheng Wei Tong is acting as the primary caregiver for her husband and becomes emotional while telling her son how difficult it is to care for his father in his current state. The emotional and physical tolls that caring for a primary family member who is losing memory, and wanting to approach that loved one with grace, compassion, and integrity is revealed in this film. We learn that there are no easy answers to honoring a long life, or to preserve the passage of time while knowing that time itself will result in more loss.

In the scope of memory preservation, what Our Time Machine makes visible is the unique promise that shared memories offer. In this way, it is a reminder that one approach to caring for someone experiencing memory loss is to remain a good steward of the collaborative aspect of memory and experience; that memories are created most often with others; and that those memories belong to each person, differently and nuanced. Even if Ma Ke’s memories are fleeting, not all is lost and Maleonn’s process of reconciling the past with the present, serves as a mode to preserve what is shared, with love and reverence.

PROMPT ONE: STARTING THE CONVERSATION

Immediately after the film, you may want to give people a few quiet moments to reflect on what they have seen. You could pose a general question (examples below) and give people some time to themselves to jot down or think about their answers before opening the discussion. Alternatively, you could ask participants to share their thoughts with a partner before starting a group discussion.

At the end of your discussion, to help people synthesize what they’ve experienced and move the focus from dialogue to action steps, you may want to choose one of these questions:

Gina Tillis
Gina Tillis, PhD. is a professor, scholar, and practitioner at the University of Memphis. She has taught high school and university courses that center the experiences of BIPOC and LGBTQ+ communities in social history, sociology, cultural anthropology, social-psychology, ethnic studies and curriculum and instruction.

This resource was created, in part, with the generous support of the Open Society Foundation and the MacArther Foundation.