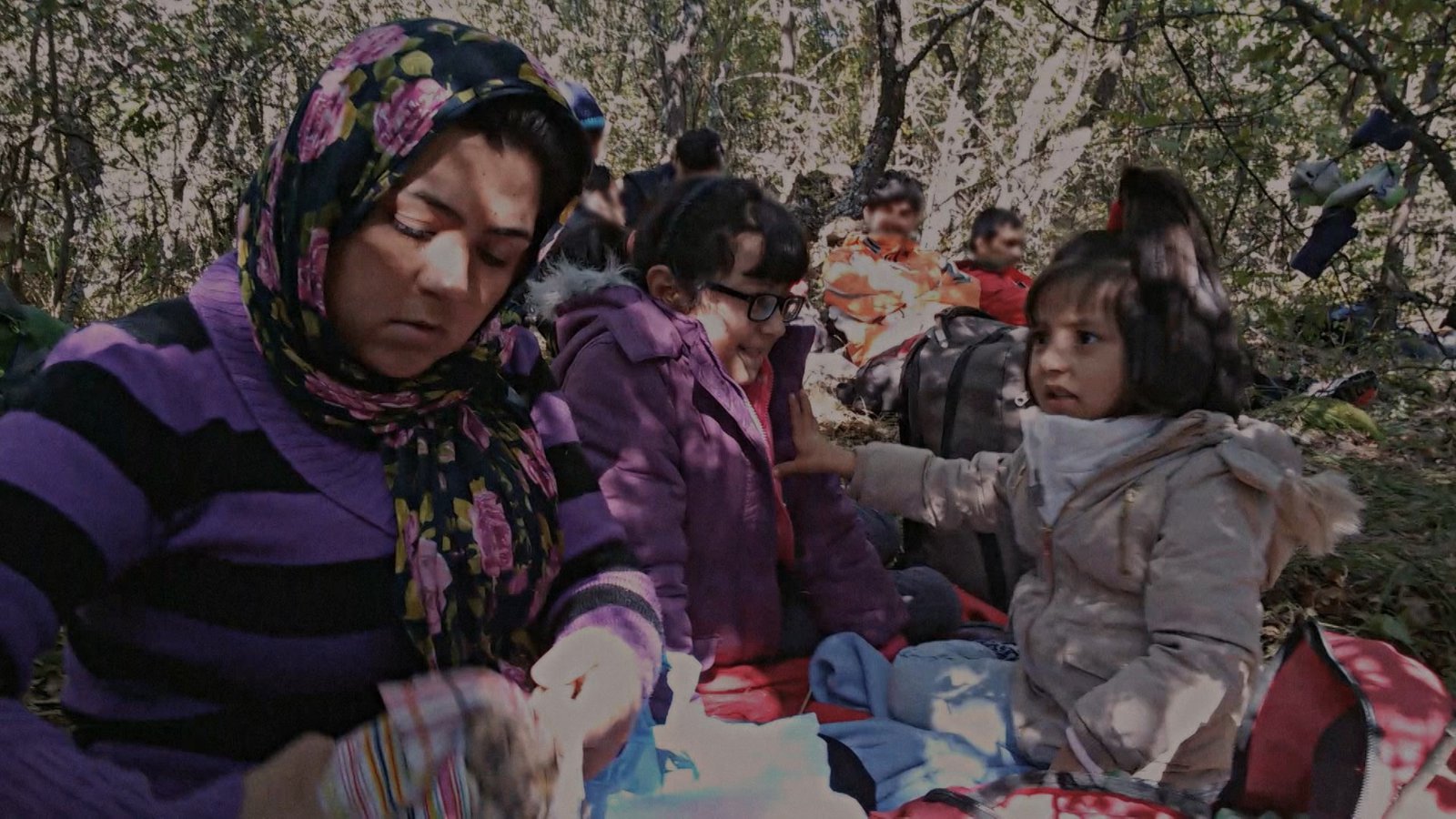 Nationalism-infused resistance to providing asylum for refugees fleeing conflict has fueled calls to close borders in places across our global community. Yet the personal stories of those who are leaving their countries to seek safety elsewhere often get lost in statistics and debates over policies.

This lesson puts a human face on the statistics with clips from Midnight Traveler, a documentary shot entirely using mobile phones by an Afghan family seeking asylum in the European Union. Students will be asked to examine the debates surrounding the rights of refugee children. The lesson then allows for a flexible compare/contrast essay, so it can be linked to existing curricular needs, including current events, global studies and history.

RESOURCES FOR PREPARING THIS LESSON

Shannon Dooling, “What Is Asylum? Who Is Eligible? Why Do Recent Changes Matter?” WBUR, December 3, 2018.

In this lesson, students will:

The associated film clips and the ability to stream them, or a copy of the film.

Below are the film clips you will utilize throughout this lesson.

The clip begins at 3:00 minutes from the start of the film with text on screen that reads, “And this is a story of a journey,” and ends at 6:00 with Zahra eating.

We find out that Hassan Fazili is a filmmaker, and that he and his wife, Fatima Hossaini, ran an art café in Afghanistan that the Taliban didn’t like, so the Taliban issued a death warrant for Hassan. The couple document the threat so they can apply for asylum in another nation. (We see the large amount of documentation.) Together with their young daughters, Nargis and Zahra, they flee to Tajikistan for safety, but they are denied asylum there, so they are to be deported back to Afghanistan.

After hearing of nearby murders, the family decides it’s unsafe for them in Iran, so they use smugglers to get to Turkey. We get a sense of what that part of the journey is like: a clandestine car ride and an uncomfortable stint in a van with other refugees. Hassan briefly thinks he’s lost his glasses—an easily solved problem under normal circumstances, not so as a refugee.

The clip begins at 26:00 with Zahra and Nargis sitting at a table. It ends at 31:30 with Nargis and a young man being chased from an orchard back to their Bulgarian safe house.

Hassan negotiates with a smuggler to get them from Turkey into Bulgaria. Though it’s expensive, they are heading to the European Union to seek asylum there. They use a mobile phone to track the route. We see people sleeping on the floor in a safe house and outside in fields, hiking in the rain, hearing stories of being caught and sent back. Fatima injures her ankle, and Nargis goes with another refugee to steal plums because there is no food at the safe house.

The clip starts at 32:15 with Fatima crying, “That short little dog of a smuggler.” It ends at 39:10 with Nargis sitting on a bed after a bit of a meltdown.

Smugglers steal the family’s money and demand more, threatening to kidnap the daughters if it isn’t paid. Then the smugglers abandon the family to sleep on the side of a road. The family is arrested, held for 12 days and then moved to a refugee camp in Sofia, Bulgaria, where there are beds but also bedbugs.

Outside a refugee camp, a group of refugees, including the family, are assaulted by a nationalist Bulgarian gang. The attack leaves the children feeling unsafe.

The clip begins at 54:00 with refugees who are hiding in a forest huddled around a fire trying to keep warm. It ends at 56:10 with Fatima positioning a mattress to create a sleeping area in a hallway.

The family lives in a forest for several days as they secretly make their way across the border from Bulgaria to Serbia. When they arrive at their destination, they are told there are no beds available, so they are forced to sleep in a hallway.

Day 271 of the family’s journey finds them stuck in Serbia. Hassan and Fatima reject the option of trying to sneak into Hungary because they don’t want to put the girls through that ordeal.

The family leave Serbia thinking that they will finally reach safety and freedom in Hungary; they are instead captive at a Hungarian transit center as they wait to see whether the asylum they are seeking will be granted.

Introduce the lesson and discussion by asking students for their best guesses at the answers to these questions:

(Do this step quickly enough that students can’t look up answers on phones, tablets or laptops)

After accepting several guesses, show this web page of statistics from the United Nations:

Invite students to notice which of their guesses were accurate. Let them share anything that surprised them. Give them some time to consider what assumptions may have been embedded in their guesses and write them down (in journals or daily documents if you have them). Give students a few minutes to share with partners.

[Optional] Take a few minutes to discuss the source of the statistics. What is UNHCR? Why would statistics from that organization tend to be reliable or unreliable?

[Optional] Tell students that there are approximately 7.7 billion people in the world and let them figure out what percentage of the world’s population are refugees.

Ask students to define the terms “refugee” and “asylum.”

[Optional] If you have in-class Internet access, use this as an opportunity for students to practice research skills by asking them to search for definitions of the terms.

Guide them to think about why it would be necessary to have a precise legal definition.

Then share the official United Nations definition from the Convention and Protocol Relating to the Status of Refugees (https://www.unhcr.org/en-us/3b66c2aa10), which states that a refugee is a person who,

Review the definition and ensure that everyone understands it. Explain that a refugee who is granted asylum is given legal status to live in a nation that isn’t their nation of origin.

Explain to students that they are going to humanize the statistics and legal definitions and get a sense of what a refugee experiences by seeing clips from a documentary film called Midnight Traveler. The film follows one family’s journey from Afghanistan to asylum in the European Union. Invite students to notice the mundane things they probably take for granted that are especially difficult for the refugees.

Give students a focus for viewing. This can be connected to specific topics the students have been studying and/or their task after viewing, which will be to write a five- to 10-point bill of rights for refugee children.

You could also pose these questions:

Show all the film clips in order, stopping only for occasional check-ins to make sure students understand what they are seeing. The experience is intentionally choppy to give a feel for a journey that isn’t smooth, predictable or linear.

After the final clip you can let students know that after a three-year, 3,500-mile journey, the family’s asylum claim is ruled legitimate and they are granted entry into the European Union.

Discuss how the family in the film had no other choice but to smuggle themselves illegally across the European Union border, noting that it was the only way to get their case heard. Check for understanding and ask students to consider how breaking the law was the only way for them to gain legal status and protection. Ask students how they feel about this, what seems complicated about this process and what might factor into this process not being more straightforward.

Allow students a couple of minutes to share initial reactions and answer the questions you posed as a prompt: Once the family is out of Afghanistan (and therefore out of immediate danger), why is their journey to safety so difficult? Who is putting up the obstacles and why?

If you are dividing the lesson into two class periods, this would be the natural stopping point for the first class.

Ask students if they can think of another time in history/another historical figure who broke the law for positive reasons?

Ask students if they can think back to a law (either nationally or globally) that made some people safe and others less safe.

Divide students into small groups. Ask them to think about the experiences of Nargis and Zahra. Each group should brainstorm a list of rights that they think the world should grant to refugee children (e.g., nations should be required to provide adequate food to any child who shows up inside their borders, irrespective of legal status; children have a right to stay with their parents).

After groups have had time to develop their declarations, create a class document that assembles all the points. Conduct weighted voting, asking students to evaluate the importance of each point. They can rate each right on a scale of zero (not important) to five (essential). Tally the votes and have everyone note the top 10. Create a list of the top 10 that will be accessible to everyone.

Guide a discussion about how well nations are meeting the needs identified by students in their bill of rights. The focus of the discussion can be determined by your curriculum. For example, a current events class might want to look at current U.S. policies governing children crossing the border illegally. A global studies class might want to look at the European Union’s attempts to deal with millions of immigrants from places like Syria and Afghanistan and how nations bordering conflict regions are saddled with the greatest burdens. Students might also want to address the challenges of accepting refugees from cultures that are very different from that of the adopted nation.

To synthesize what they’ve learned, assign students to write compare/contrast essays, comparing the class bill of rights with one of the following:

Study U.S. involvement in Afghanistan and the current relationship with the Taliban. Discuss whether the United States should refuse to negotiate with the Taliban unless it agrees to adhere to basic human rights standards for Afghan citizens (so that people like Hassan and Fatima would be free to make films or run a café without having to fear for their lives).

Compare the experiences of the Fazili family to what you’ve learned about refugees fleeing Russian pogroms in the late 1800s or the Nazis during the 1930s. Include comparisons of 1) the reason for fleeing; 2) the conditions of the journey; and 3) the reception from other countries.

Use a cell phone to document a personal journey (either metaphoric or real). Discuss what you learned from making your own film that helped you better understand or appreciate the clips you viewed from Midnight Traveler.

Read a literary account of a refugee’s journey. Discuss what you found compelling in the film and in the printed text, noting the techniques use by each medium to convey emotions as well as facts.