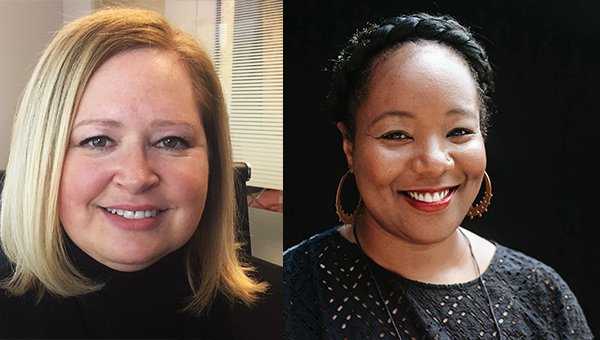 Former Tribune managing editor Jane Hirt and curator, filmmaker and writer Maori Karmael Holmes to join as the 14th and 15th members of the American Documentary board of directors

New York, N.Y. — October 11, 2019 — American Documentary (AmDoc), the parent organization of the PBS documentary series POV, announced the addition of Jane Hirt and Maori Holmes to the board of directors today. The addition of Hirt and Holmes expands the board to 15 members from across the country.

Jane Hirt joins the board with a journalist's background, having spent two decades at The Chicago Tribune, and acting as managing editor and vice president from 2008–2014. Hirt also co-founded RedEye, a millennial news startup within the Tribune portfolio.

Maori Holmes is the founder and director of the BlackStar Film Festival, which focuses on independent filmmakers of color. Holmes brings extensive curatorial and filmmaking experience. She has organized programs in film at organizations including the Whitney Museum of American Art and the Museum of Contemporary Art in Los Angeles.

On joining the board, Holmes said: "I have long been a fan of American Documentary and its programs and am excited to be joining the board and working to support the field at this critical time in our cultural landscape, when exceptional and poignant storytelling is more necessary than ever."

Hirt added: “I’m delighted to be joining American Documentary’s board of directors. I’ve spent my career in the storytelling business and I know the incredible power of a story well told. I’m honored and so excited to be able to support independent filmmakers who will change lives through their documentaries.”

More about Maori Holmes and Jane Hirt are in their bios below:

Jane Hirt is a 25-year veteran of the news industry. At the Chicago Tribune, she was a journalist and managing editor/vice president from 2008 to 2014, in charge of the newsroom's day-to-day operations and its more than 400 journalists. During that time, she oversaw the newsroom’s renewed focus on investigative journalism and managed its transition from a print-focused newsroom to a digital-first organization. She joined the Tribune in 1990.

Jane also was founding co-editor of RedEye, a pioneering Millennial news startup within the Tribune's portfolio. She currently is a communications and marketing consultant based in Chicago.

A native of Nebraska, Jane graduated with a journalism degree from the University of Nebraska-Lincoln. She volunteers extensively and lives in Chicago with her husband.

Maori is a curator, filmmaker and writer. She is founder and director of the BlackStar Film Festival. A native of Los Angeles, she has organized programs in film at a myriad of organizations including Anthology Film Archives, Institute of Contemporary Art (Philadelphia), Lightbox Film Center, Museum of Contemporary Art (Los Angeles), The Underground Museum, and the Whitney Museum of American Art. As a filmmaker, her works have screened internationally including her feature documentary Scene Not Heard: Women in Philadelphia Hip-Hop (2006). She has also directed and produced works for Colorlines.com, Visit Philadelphia, and India.Arie.

In 2012, she founded the BlackStar Film Festival, which focuses on independent filmmakers of color from across the globe. She was guest curator for the Flaherty Film Seminar in Fall 2017 and guest programmer for Scribe Video Center in Spring 2017. Other projects include KinoWatt (2011-2012, co-curated with Sara Zia Ebrahimi) and Black Lily Film & Music Festival (2006-2010).

Maori most recently served as Executive Director of ARRAY Alliance. Prior to that position, she served as Director of Public Engagement at the Institute of Contemporary Art, University of Pennsylvania, a role she originated, creating a new department. She previously held positions at Leeway Foundation, Painted Bride Art Center, Department of Media Studies & Production at Temple, Netter Center at University of Pennsylvania, Philadelphia Independent Film & Video Association, Sony Music, and Washington City Paper. She has taught filmmaking and film studies at Drexel University, Temple University, University of the Arts, Villanova University, Scribe Video Center, and Philadelphia Community Access Media (PhillyCAM). She began her career with internships at the Smithsonian Institution’s National Museum of American History and Dallas Austin’s Rowdy Records.

A 2019 Soros Equality Fellow, Maori has received awards from the John S. and James L. Knight Foundation, Pennsylvania Council on the Arts, Leeway Foundation, Independence Media, Women’s Way, and Philadelphia Commission on Human Rights. Maori was named a Creative Ambassador by Visit Philadelphia in 2009 and was a fellow at the 2014 Flaherty Film Seminar and a 2016 Ford Foundation Rockwood JustFilms Fellow.

Maori received her MFA in Film & Media Arts from Temple University, her BA in History from American University, and studied Design & Production at the graduate level at California Institute of the Arts. Maori currently serves on the advisory boards of Ulises and Lightbox Film Center and is a juror for the 2019 Full Frame Film Festival and the Philadelphia Asian American Film Festival.