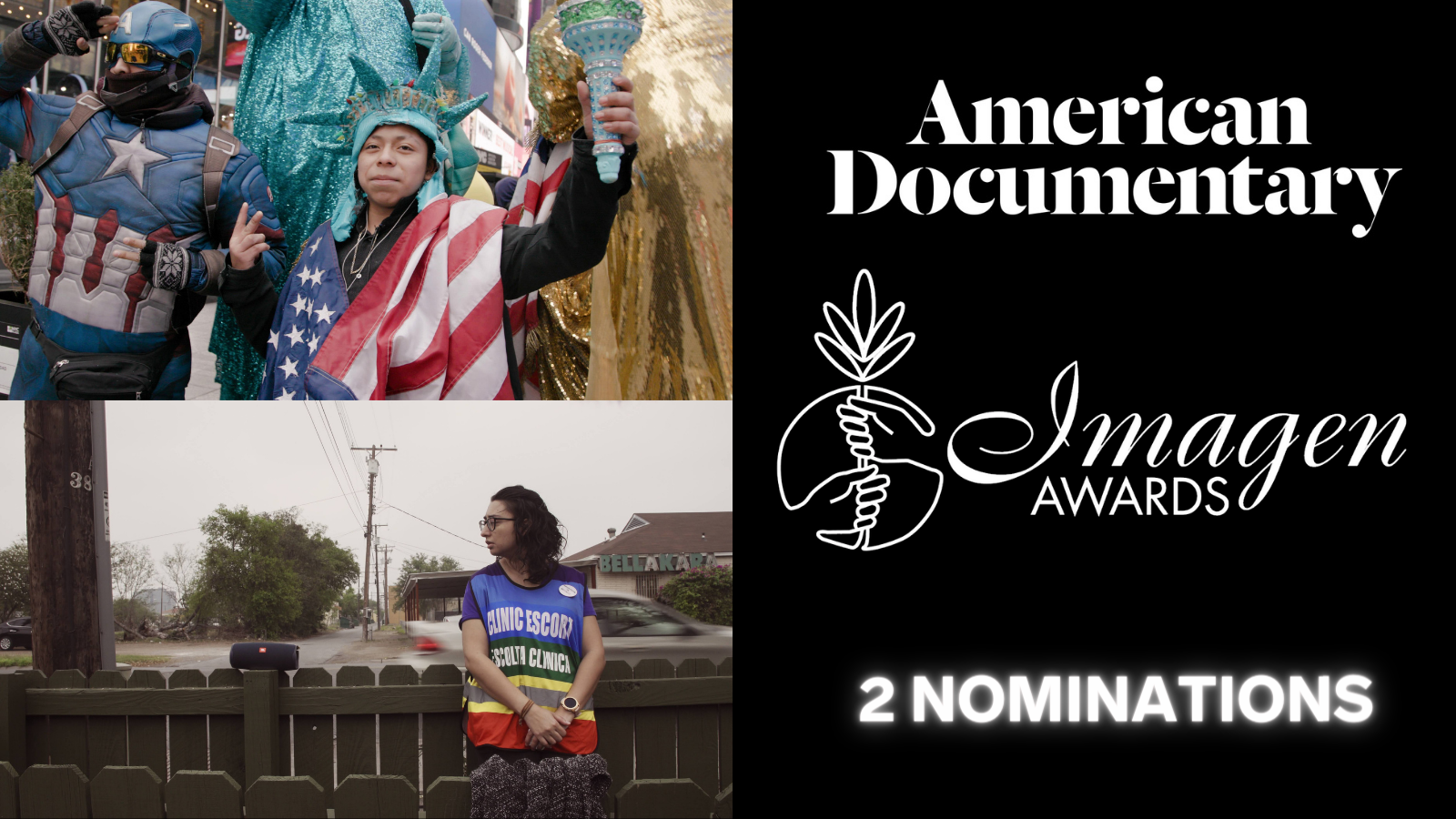 New York, N.Y. — August 16, 2022 — The Imagen Foundation announced yesterday that American Documentary has received two Best Documentary nominations for the 37th Annual Imagen Awards. The presentation is the only Latino and Latinx entertainment awards event dedicated to honoring the positive portrayal and creative excellence of Latinos, Latino, and Latinx cultures in television and film.

Currently celebrating its 35th anniversary as America’s longest running non-fiction series, POV’s nominee is On the Divide, by first-time directors Maya Cueva and Leah Galant. The film follows the story of three Latinx people living in McAllen, Texas who, despite their views, are connected by the most unexpected of places: the last reproductive health clinic on the U.S./Mexico border. As threats to the clinic and their personal safety mount, these three are forced to make decisions they never could have imagined. A Fishbowl Films production in association with Giving Voice Films, Willa Productions and Latino Public Broadcasting, On the Divide is a co-production of POV.

Five Years North, directed by Zach Ingrasci and Chris Temple, is America ReFramed's nominee. The Peabody award-winning documentary series is co-produced by WORLD Channel and American Documentary. Five Years North tells the story of Luis and Judy. Luis is an undocumented 16-year-old Guatemalan boy who arrives alone in New York City from an ICE detention center with little support and many responsibilities. Luis has journeyed to the U.S. to make money for his family back home, all of whom are relying on him for their very survival. His experience is set against that of Judy, an officer for the U.S. Immigration and Customs Enforcement (ICE). Despite the objections of her Cuban American and Puerto Rican parents, Judy remains committed to her job. As agency enforcement priorities change, Judy must weigh the human cost of her work at ICE against the future her family would face without her paycheck.

“We are so proud of On the Divide and Five Years North and their recognition by the Imagen Foundation. Both films are brilliant and nuanced stories and important additions to the Latinx and U.S. nonfiction cinema canon. We are extremely grateful to have them as part of American Documentary’s POV and America ReFramed series," said Erika Dilday, executive producer of POV and America ReFramed and executive director of American Documentary

Throughout its history, POV has reaffirmed its longstanding commitment to Latinx and Latin American stories and filmmakers. POV has championed representation and inclusion, by working hand-in-hand with filmmakers to elevate the documentaries that inspire us, educate us and entertain us. Since 2012, the anthology series, America ReFramed, has brought to life compelling stories, personal voices and experiences that illuminate the contours of our ever-changing country.

The Imagen Awards winners, selected by an independent panel of entertainment industry executives and Latino and Latinx community leaders, remain secret until announced at the virtual awards event on October 2, 2022.

About America ReFramed
America ReFramed is a co-production of the WORLD Channel and American Documentary, Inc. The series curates a diverse selection of independent documentaries that brings to national audiences compelling stories which illuminate the changing contours of our ever-evolving country. Viewers will be immersed in stories that span the spectrum of American life, from the streets of towns big and small to its exurbs and country roads. The documentary series presents an array of personal voices and experiences through which we learn from our past, understand our present and are challenged to seek new frameworks for America’s future.

America ReFramed is the recipient of a Peabody Award and an Alfred I. duPont-Columbia University Award for broadcast journalism. The series has earned several Christopher, GRACIE, Telly and Cine Golden Eagle Awards, as well as multiple nominations for Emmy, Independent Documentary Association and Imagen Awards. For more information and films, visitwww.WORLDchannel.org.

About WORLD Channel
WORLD shares the best of public media in news, documentaries and programming. WORLD’s original series examine the issues and amplify the voices of those often ignored by mainstream media. The multicast 24/7 channel helps audiences understand conflicts, movements and cultures from around the globe. Its original work has won a Peabody Award, an Alfred I. duPont-Columbia Award, a National News and Documentary Emmy Award, two Webby Awards and many others honoring diversity of content and makers. WORLD is carried by 195 member stations in markets representing 75.1% of US TV households. Funding for WORLD Channel is provided by the Corporation for Public Broadcasting, the John D. and Catherine T. MacArthur Foundation, Wyncote Foundation and the National Endowment for the Arts and Artworks. WORLD is produced by GBH in partnership with WNET and is distributed by American Public Television (APT). Find out more at WORLDChannel.org.