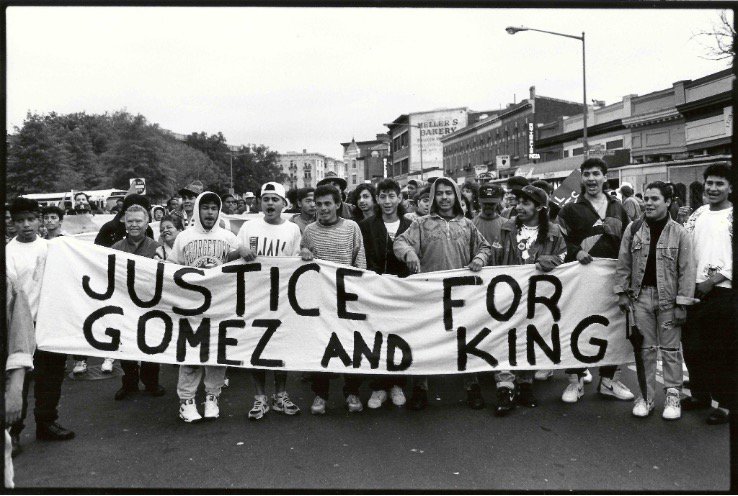 BOSTON, MA – August 29, 2022 – America ReFramed, the Peabody award-winning documentary series co-produced by WORLD Channel and American Documentary, announced the acquisition of La Manplesa: An Uprising Remembered, Kid Candidate, From Here, and Big Chief, Black Hawk that will premiere as part of its 2022-2023 lineup. Now in its tenth season, the series continues to strengthen its year-round slate with these four new titles that offer local perspectives on climate change, immigration, and local elections, including stories from New York City, New Orleans, Washington, DC, and Amarillo, TX.

“Civic engagement lies at the heart of democracy, and America ReFramed is dedicated to elevating the stories of diverse activists creating change around the world,” said Chris Hastings, executive producer for WORLD Channel at GBH in Boston. “Together in partnership with American Documentary, we look forward to introducing viewers to documentaries from talented independent filmmakers who are shining a spotlight on brave individuals and communities that have pushed boundaries for the right to celebrate their culture.”

“As we celebrate the tenth year of America ReFramed, with WORLD Channel, we are proud to offer films by both seasoned and first-time filmmakers that capture the rich tapestry of America today. Confronting issues such as voting rights, racism, equity, immigration and inclusion prompt the dialogue and discussion our country needs to have.,” said Erika Dilday, executive director at American Documentary.

In addition, America ReFramed acquired two debut feature films from exciting new directors, with premiere dates to be announced. From Here, directed by Christina Antonakos-Wallace, is the inspiring story of four young artists from immigrant families who are redefining the meaning of “belonging” in an era of rising nationalism and globalism. Big Chief, Black Hawk, directed by Jonathan Isaac Jacksno, is a unique look at the life of the youngest Mardi Gras Indian Big Chief and his "tribe" as they navigate the social and environmental issues facing "the culture."

Alongside fall premieres, America ReFramed will roll out timely encore presentations that resonate with key issues and diverse communities. Several films focus on democracy and voting rights, including Fannie Lou Hamer’s America, about the fearless Mississippi sharecropper-turned-human-rights-activist; First Vote, a verité look at Asian American voters in battleground states; and Hamtramck, USA, an exploration into life and democracy in America's first Muslim majority city. The series will also bring back several titles in time for Native American Heritage Month: The Blessing, chronicling the struggle between tradition and modernity through the lens of one small family in the Navajo Nation; Blood Memory, offering new revelations about the history of America’s Indian Adoption Era and Sisters Rising, featuring six Native American women reclaiming their personal and tribal sovereignty in the face of violence.

On May 5th, 1991, people took to the streets of Washington D.C.’s Mount Pleasant neighborhood to protest the police shooting of Daniel Gomez, a young man from El Salvador. Through testimony, song, poetry, and street theater, La Manplesa: An Uprising Remembered weaves together the collective memory of one of D.C.’s first barrios and dives into the roots of the ‘91 rebellion. As people across the world take to the streets to demand an end to police brutality, the film honors the largely untold stories that have come before us and explores how artists prompt us to remember what we still have to fight for.

In 2018, 24-year old Hayden Pedigo released a Harmony Korine inspired spoof video declaring his candidacy for Amarillo, TX city council. After the video goes viral in the local community, Pedigo is inspired to actually run for council in the small Texas town. With a goal of upending the status quo and ousting the county’s corrupt incumbent politicians, the young experimental musician and filmmaker makes a name for himself – not just for his bizarre campaign, but for reaching out to the local communities that have suffered the most in Amarillo. While still keeping a humorous and light-hearted tone, Kid Candidate goes beyond Pedigo’s political run and looks at issues of race, income inequality and gentrification in small-town America.

Set in Berlin and New York, From Here interweaves the stories of Tania, Miman, Sonny and Akim – artists and activists raised in the Global North to parents from the Global South. The film accompanies them as they move from their 20’s into their 30’s, facing major turning points: fighting for citizenship, creating a family, surviving violence, and finding creative expression. Beautifully shot over the course of ten years, the film captures their struggle to define belonging for themselves in societies increasingly hostile to their existence.

A short and intimate look into the life of the youngest Mardi Gras Indian Big Chief and his "tribe" as they navigate the social and environmental issues facing "the culture." This film is a story about why tradition and culture are so important to the African American community in New Orleans today. Through interviews and storytelling, Big Chief, Black Hawk delves into the past to introduce the future, displaying how the past has been passed onto the present.