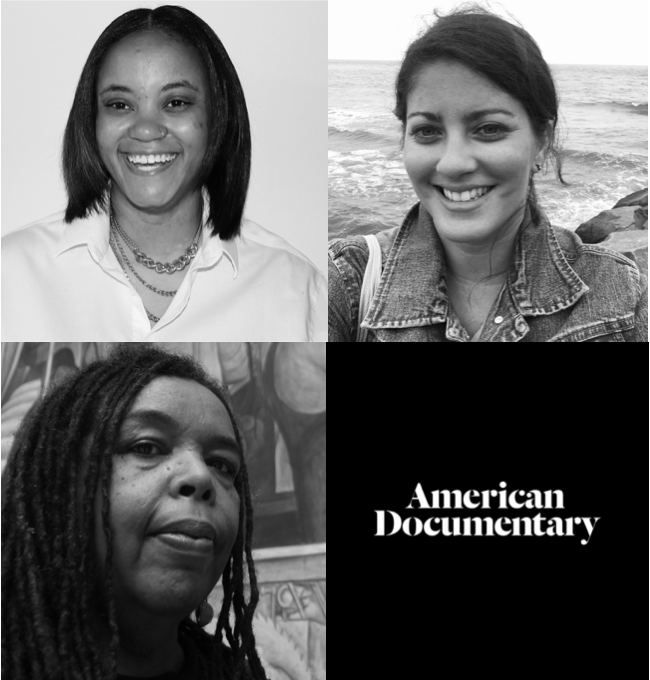 New York, NY – April 1, 2022 – American Documentary, the award-winning nonprofit behind public media series 'POV' and 'America ReFramed,' announced the addition of a new board member and the expansion of its external affairs department with the hire of two senior staff.

Juanita Anderson, producer, documentary filmmaker and ​​head of the Media Arts and Studies Program at Wayne State University officially joined the organization’s board of directors this month. A co-founder of Black Public Media, Anderson brings nearly two decades of public media experience that includes production roles at WSIU, WTVS, and WGBH. She is an executive producer whose credits include the POV film Who Killed Vincent Chin? and ITVS series Positive: Life With HIV.

“In its 35 year history, American Documentary has played a vital role in pushing the boundaries of storytelling in independent film and public media, and especially now during this critical time in our industry. It is my honor to join the AmDoc board. The early years of POV were part of my own journey in public media and so in many ways this feels like a homecoming,” says Anderson.

Anna Graizbord was hired as the organization’s Director of Marketing and Communications earlier this year, and Jessica Brown will join as Development Director starting April 2022. Helmed by vice president Theresa Navarro, the external affairs department leads organizational branding, messaging and positioning to increase audiences and support for the nonprofit and its programs. Both directors will work closely with Navarro and executive director Erika Dilday to launch a series of activities to celebrate the organization's 35th anniversary.

"It is truly a pleasure to have Juanita, Anna and Jessica join our team. Their energy, enthusiasm and passion for what we do has made them instantly valuable and we are excited about the work ahead. Each of them brings unique perspectives and strong records of accomplishment,” said Erika Dilday, executive director of American Documentary. “We’ve long admired Juanita’s incredible career and legacy as an educator, award-winning filmmaker, and advocate for BIPOC creators, and are overjoyed at welcoming her to our board. Jessica’s extensive experience in arts development and background in documentary film makes her a natural fit for American Documentary. Anna brings a wealth of knowledge in media industry marketing that will be instrumental in building meaningful collaborations with filmmakers, public audiences, and industry partners."

A faculty member in the Department of Communication at Wayne State University since 2003 teaching film production and media studies, Juanita’s multifaceted career also includes a combined 17-years at public television stations WSIU (producer/director, production manager) WTVS (executive producer) and WGBH (series producer), before becoming an independent producer in 1993. A long-standing advocate for diversity in public media, Anderson was a co-founder of the National Black Programming Consortium in 1978 (now Black Public Media), and served on the board of directors of the Independent Television Service from 1998-2005.

Over the course of her career, Anderson has served as a mentor to multiple generations of emerging and established filmmakers, and has launched some 15 projects into national public television distribution. She is best known for her work as executive producer of the 1989 Academy Award-nominated feature film Who Killed Vincent Chin? (a film by Christine Choy and Renee Tajima), which garnered a duPont Columbia Silver Baton, a George Foster Peabody Award, and was inducted into the National Film Registry in 2021. Her executive producer credits also include the four-hour ITVS-commissioned series Positive: Life With HIV (1995), the PBS/NBPC public affairs special Black America Facing the Millennium (1998), and the Favorite Poem Project Video Anthology (2000, 2006, 2014), conceived by U.S. Poet Laureate Robert Pinsky, and originally commissioned for the bicentennial of the Library of Congress. Anderson has been awarded fellowships from the American Dance Festival Dance/Television Workshop, the National Endowment for the Humanities Summer Institute on African Cinema, and the Television Academy Foundation. In 2020, Anderson was named Resident Artist in Media Arts and film curator at The Carr Center in Detroit. She is one of 36 established BIPOC filmmakers who were named Spark Fund recipients by Firelight Media in 2022 to support work on humanities-themed projects that were disrupted by the COVID-19 pandemic.

Jessica has worked in nonprofit development for almost a decade serving organizations in Georgia, Washington D.C., and New York. Originally from Augusta, Georgia, her passion for storytelling and filmmaking stems from documenting her family’s rich history and a desire to create platforms for marginalized groups. Her educational experience includes a BA in Communication Studies and Anthropology from Augusta University and a MA in Journalism, specializing in Documentary Filmmaking from the Craig Newmark Graduate School of Journalism at CUNY. In addition to directing and producing her own projects, Jessica enjoys working on production teams with other indie filmmakers helping to bring their stories and ideas to life.

Originally from San Diego, California, Anna has been working in the media industry for the last 13 years in New York. Her last role was at the non-profit political news publication The American Prospect as their first PR Director. Before that, she served as Associate Director of Creative Strategy on the business team at Quartz Media. Prior to Quartz, she spent four years at VICE Media in a variety of positions on both the branded and editorial sides, where her passion for filmmaking and content marketing ignited. Anna is a Cal State Long Beach alum, with a BA in Women’s Studies.

Alongside the new board member and directors, American Documentary is bringing on seasonal staff and strategic consultants to support the organization’s busiest period, which typically coincides with the new season of its flagship series 'POV' on PBS. The organization also plans to hire several new full-time staff positions this year, including a manager in its growing development department. For more information on job and internship opportunities, visit amdoc.org/careers or subscribe to our POV Digest newsletter here.