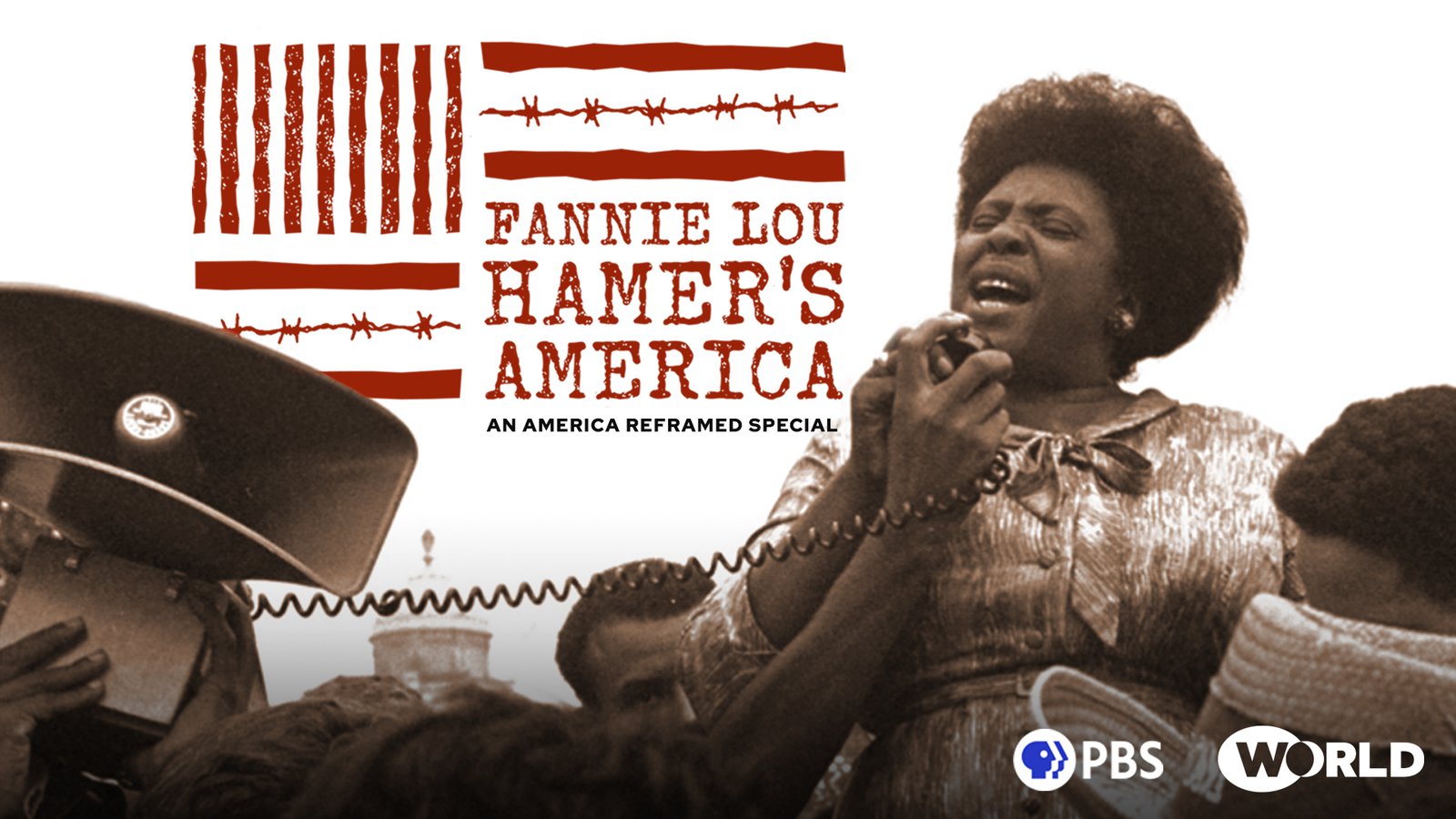 BOSTON (January 11, 2022) —America ReFramed, the Peabody Award-winning documentary series co-produced by WORLD Channel and American Documentary, Inc., ushers in its milestone tenth season with the world premiere of Fannie Lou Hamer’s America. Produced by Hamer’s great-niece Monica Land and Selena Lauterer and directed by Joy Davenport, the captivating portrait of one of the civil rights era’s preeminent icons through her own speeches, interviews and songs follows Hamer’s life from the cotton fields of Mississippi to the halls of Congress. Fannie Lou Hamer’s America: An America ReFramed Specialbroadcasts on PBS on Tuesday, February 22, from 9 to 10:30 p.m. ET and on WORLD Channel on Thursday, February 24, at 8 p.m. ET during Black History Month. Beginning on February 22, the film also streams on worldchannel.org, WORLD Channel’s YouTube Channel and on all station-branded PBS platforms, including PBS.org and the PBS Video app, available on iOS, Android, Roku streaming devices, Apple TV, Android TV, Amazon Fire TV, Samsung Smart TV, Chromecast and VIZIO.

Through rare footage and recordings, some not seen or heard in half a century, Hamer tells her story — and that of America — more than four decades after her death. The directorial debut of Davenport and the brainchild of Land, the film offers photos, documents, performances and sources, some unearthed by family members, to a new generation of audiences called upon to take up the mantle of preserving American democracy. Fifteen years in the making, Fannie Lou Hamer’s America presents the daughter of Mississippi sharecroppers’ passion and commitment to voting rights and economic justice and her rise to national prominence. The film captures Hamer’s resistance as she works to register Black voters, runs for Congress, fights for economic opportunity in her home state and more — all while government leaders, the media and even her civil rights peers tried to silence her.

“Fannie Lou Hamer put her life on the line working to ensure that America lived up to its promise,” said Davenport. “She urged us to look directly at the truth of this country. In the decades since her death we've collectively looked away, but to a sick and tired nation that yearns for the American dream, her message remains painfully clear: it's time to wake up.”

The film airs at a time when Black women are being acknowledged for their work at the forefront of the fight for voting rights amidst unprecedented voter suppression efforts targeting citizens of color — in the spirit of Hamer’s famous quote, “Nobody’s free until everybody's free.”

“Fannie Lou Hamer’s America will steep viewers in Black history while providing greater context for and insight into some of today’s biggest challenges,” said Chris Hastings, executive producer/managing editor of WORLD Channel at GBH in Boston.

“As a family member of Mrs. Hamer’s, Monica Land has provided us with the rare opportunity to peek inside the life of one of America’s most important moral leaders,” said Erika Dilday, executive director at American Documentary. “We are happy to welcome this film to the roster of diverse and thought-provoking works that comprise the America ReFramed catalog.”

WORLD shares the best of public media in news, documentaries and programming. WORLD’s original series examine the issues and amplify the voices of those often ignored by mainstream media. The multicast 24/7 channel helps audiences understand conflicts, movements and cultures from around the globe. Its original work has won a Peabody Award, an Alfred I. duPont-Columbia Award, a National News and Documentary Emmy Award, two Webby Awards and many others honoring diversity of content and makers. WORLD is carried by 191 member stations in markets representing 75% of US TV households. Funding for WORLD Channel is provided by the Corporation for Public Broadcasting, the John D. and Catherine T. MacArthur Foundation, Wyncote Foundation and the National Endowment for the Arts and Artworks. WORLD is produced by GBH in partnership with WNET and is distributed by American Public Television (APT). Find out more at WORLDChannel.org.