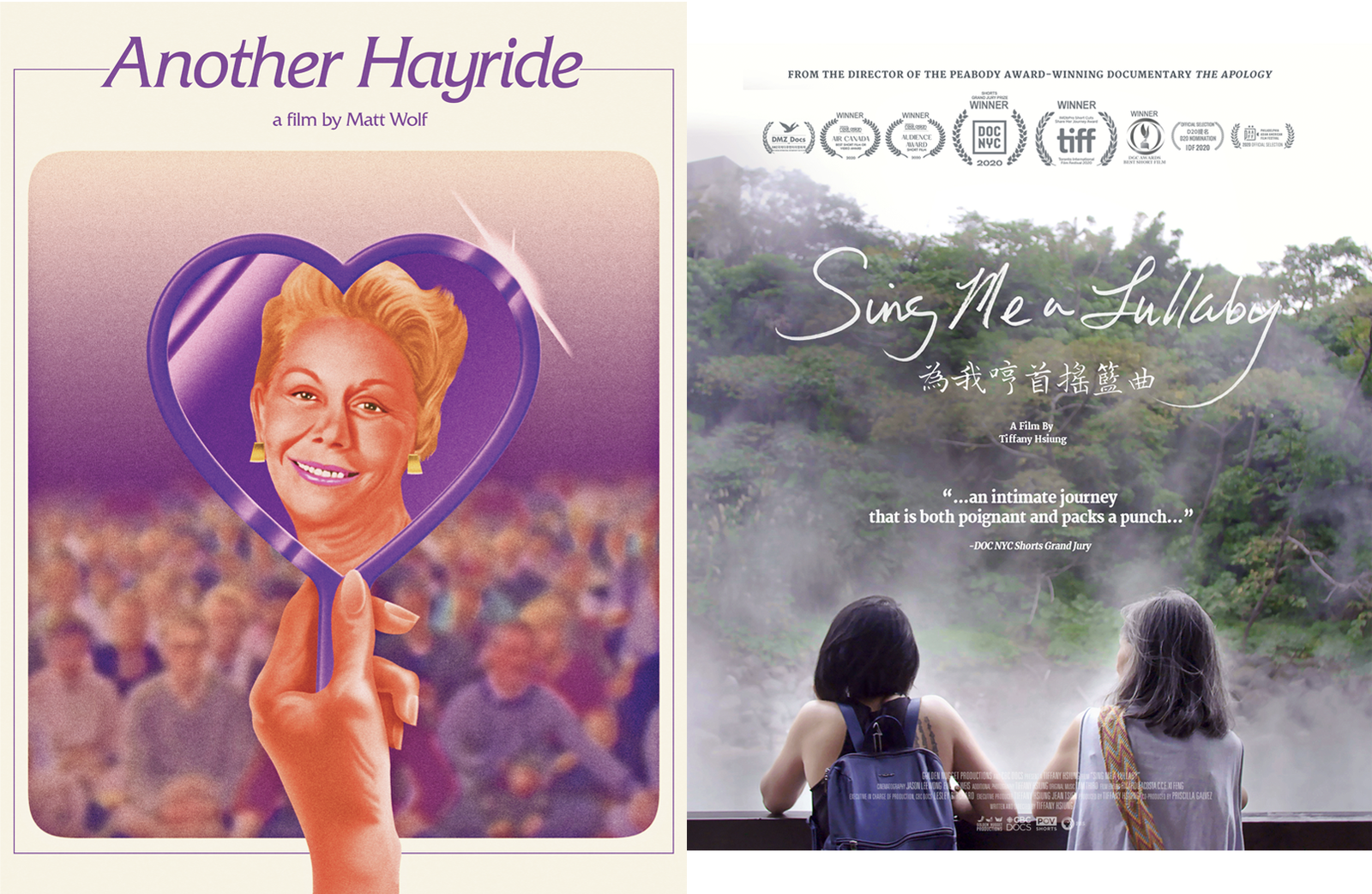 New York, N.Y., January 11, 2021 -- Award-winning PBS documentary series POV Shorts has acquired the broadcast and streaming rights for Sing Me a Lullaby, directed by Tiffany Hsiung, and Another Hayride, directed by Matt Wolf. The critically-acclaimed films will be released online this month and broadcast as part of the upcoming fourth season of POV Shorts later this year.

Sing Me a Lullaby, which begins streaming today on POV.org and the PBS app, is an intimate story about Hsiung’s fourteen-year journey to connect with her mother’s birth family. In 1965, Tiffany’s mother was separated from her parents; she never saw them again. 40 years later, Tiffany flies to Taiwan to try & find her grandparents--armed only with two names scribbled on a napkin. Told through the intertwined journeys of daughters and their mothers, this is a story about recovering familial history, healing inherited pain, and understanding that love comes in many forms.Sing Me a Lullaby is a Canadian Broadcasting Corporation production in association with American Documentary | POV. The film won the Shorts Grand Jury Prize at DOC NYC and is also available streaming on The New Yorker.

Another Hayride will have its world premiere on January 19, available streaming on POV.org and the PBS app as well as on the NYTimes.com through The New York Times Op-Docs series. As the AIDS epidemic took hold in the early 1980s, self-help guru Louise Hay created a space for healing called the Hayride. Drawing hundreds of gay men confronting a deadly pandemic, Louise promised that they could overcome AIDS through self-love. Some said this early new age wellness movement was harmful quackery. Others who were suffering said that Louise healed them. Using all archival materials, director Matt Wolf invites viewers to travel back to 1988 Los Angeles and attend a Hayride. Another Hayride was produced by Polari Pictures and Park Pictures in association with The New York Times Op-Docs and American Documentary | POV. An award-winning filmmaker, Wolf is a Guggenheim Fellow and was Co-Curator of the 2019 Whitney Biennial.

"It's a distinct pleasure to present these outstanding titles to our POV streaming audiences, and via PBS broadcast in 2021. Sing Me a Lullaby premiered in September of 2020 and has been garnering accolades ever since. We are proud to debut Another Hayride, which transports us to another time in American history where connection and inspiration were as needed as they are now," said POV Shorts Producer, Opal H. Bennett. "NYT Op-Docs and The New Yorker have been long-time collaborators and we're honored to partner with them again on these films. The selection of Sing Me a Lullaby marks our first POV Shorts collaboration with the CBC and we can't imagine a better film with which to begin."

Tiffany Hsiung: Tiffany Hsiung is a Peabody award-winning filmmaker based in Toronto, Canada and is listed as one of DOC NYC’s 40 under 40 this year. She recently won the inaugural Toronto International Film Festival ‘Share Her Journey Short Cuts Award’ after the world premiere of her recent film Sing Me a Lullaby (2020) As well as a DGC award for Best Short Film. Tiffany received the prestigious Peabody award for her debut feature The Apology (2018) along with the DuPont Columbia Award and the Allan King Memorial Award.

Matt Wolf: Matt Wolf is a filmmaker in New York. His critically acclaimed and award-winning documentary films have played widely in festivals and have been distributed internationally in theaters and on television. Matt’s features include Wild Combination about the cult cellist and disco producer Arthur Russell, and Teenage about early youth culture and the birth of teenagers. His recent film Recorder is about the activist Marion Stokes, who secretly recorded television 24 hours a day for 30 years. Matt’s newest film Spaceship Earth is about Biosphere 2, a controversial experiment where 8 people lived quarantined inside a replica of the planet. The film premiered at Sundance, was released by Neon, and is now streaming on Hulu.

Sing Me a Lullaby

Written and Directed by Tiffany Hsiung

POV films have won 38 Emmy® Awards, 26 George Foster Peabody Awards, 15 Alfred I. duPont-Columbia University Awards, three Academy Awards®, the first-ever George Polk Documentary Film Award and the Prix Italia. The POV series has been honored with a Special News & Documentary Emmy Award for Excellence in Television Documentary Filmmaking, three IDA Awards for Best Curated Series and the National Association of Latino Independent Producers (NALIP) Award for Corporate Commitment to Diversity. In 2013, American Documentary | POV was one of 13 nonprofit organizations around the world to win a MacArthur Award for Creative and Effective Institutions. Learn more at www.pbs.org/pov.