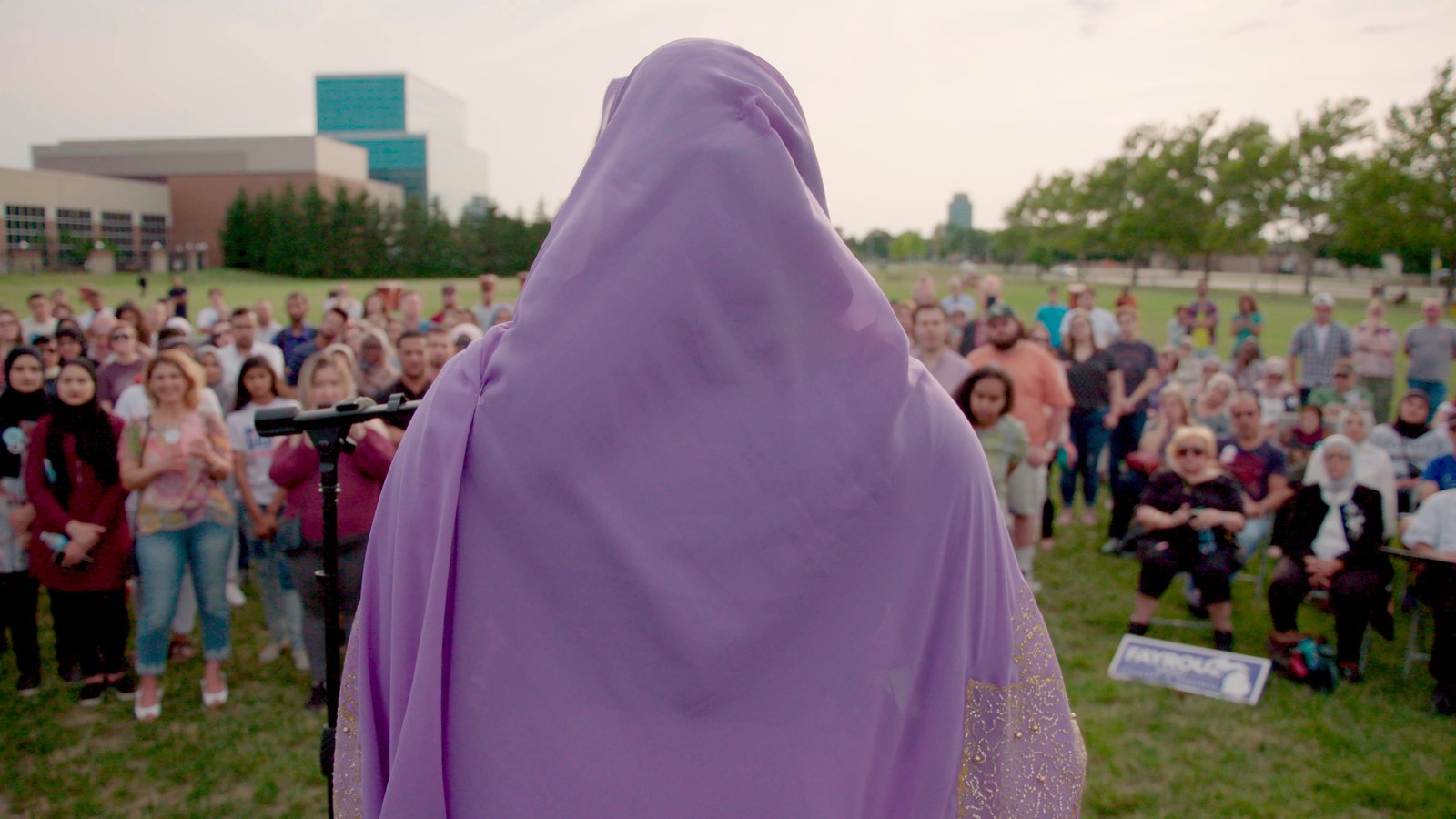 New York, N.Y. — June 10, 2022 — POV, the critically acclaimed PBS documentary series, announced today the acquisition of An Act of Worship as part of its 35th season. The film by Pakistani-American director Nausheen Dadabhoy and produced by DuPont-Crichton Award-winner Heba Elorbany, Emmy® Award-winner Kristi Jacobson, and Emmy-nominated Sofian Khan is a counter-narrative of the last 30 years of Muslim life in America. An Act of Worship made its world premiere June 9th at the 2022 Tribeca Festival and will make its national broadcast premiere on Monday, October 17, 2022 on POV.

In An Act of Worship, a diverse range of Muslim Americans recount the past 30 years of pivotal moments in U.S. history and policy from their own perspectives. The film weaves together observational footage of activists who came of age after 9/11, community-sourced home videos, and evocative recollections from individuals impacted by incidents of Islamophobia. Due to the filmmaking team’s first-hand knowledge and intimate access to the Muslim community, Dadabhoy is able to marry various voices of the account, which previously had been shaped largely by outsiders.

American Documentary | POV Executive Director Erika Dilday said: “We’re very pleased to include An Act of Worship in our Season 35 slate. This film dispels the idea of Muslim Americans as a monolith and contextualizes each specific story and voice in the mosaic that is America.”

“Through intimate home video archival and a tapestry of community voices that narrate the film, we hope to regain authorship of our community’s story. It’s a way to replace images of violence so that our community can see itself through its own gaze. Our partnership with POV is so meaningful, as it expands our film’s reach as we’d always hoped – reaching our community, through impact and engagement screenings, and via broadcast, the private, quotidian, and communal moments that are rarely portrayed in stories about Muslim Americans will be televised into homes across the United States” said An Act of Worship filmmaker Nausheen Dadabhoy.

The An Act of Worship deal was negotiated by Chris White and Erika Dilday for American Documentary | POV and Nausheen Dadabhoy, Heba Elorbany, Kristi Jacobson, and Sofian Khan for the filmmaking team.

In addition to An Act of Worship screenings during the festival, Tribeca Festival and The Blackhouse Foundation, with co-hosts Firelight Media, Brown Girls Doc Mafia, and Pillars are holding a special panel event featuringAn Act of Worship. Panelists will discuss the importance of storytellers from marginalized communities, providing perspectives through lived experience and disrupting harmful narratives that impact their communities.

Nausheen Dadabhoy is a Pakistani-American director and cinematographer whose work spans fiction and documentary. As a cinematographer she has lensed an Oscar® nominated live action short film and an Emmy® winning feature documentary. Her films have screened at festivals worldwide including Sundance, TIFF, Tribeca, Locarno and have appeared on Netflix, Amazon, HBO and PBS. THE GROUND BENEATH THEIR FEET (2014) — her directorial debut following two Pakistani women who were paralyzed after an earthquake — premiered at IDFA in the first appearance competition. Nausheen has been a Film Independent Project:Involve Fellow, Berlin Talents participant, Firelight Fellow, Chicken & Egg Eggcelerator Lab Fellow, newportFILM Documentary Cinematography Fellow, Soros Equality Fellow and she is currently a Pillars Artist Fellow. She was part of DOCNYC’s inaugural “40 Under 40.” Nausheen is based in NYC, LA and Karachi, Pakistan. She received her MFA in Cinematography from the American Film Institute.

Heba Elorbany is an Egyptian-American journalist and filmmaker based in Los Angeles. Her first documentary film, LIFEHOUSE (2017), earned her a DuPont-Crichton Award. She was a researcher and assistant editor on Oscar-nominated short documentary film ST. LOUIS SUPERMAN and has collaborated with award-winning directors, including Lana Wilson (THE DEPARTURE, AFTER TILLER) and Smriti Mundhra (A SUITABLE GIRL). In addition to making documentary films, she produces audio stories and live shows. She’s worked on productions for The New York Times, Viacom, BBC, Gimlet Media, PRX, Radio Ambulante and more. Heba earned her master’s degree in 2017 from Columbia University’s Graduate School of Journalism and is currently a senior producer atThe Los Angeles Times.

Kristi Jacobson is an Emmy-winning documentary filmmaker. Her films include SOLITARY (HBO), which won the Emmy Award for Outstanding Investigative Documentary, the critically acclaimed TOOTS (Tribeca Film Festival), and A Place at the Table (2012 Sundance Film Festival). Her episodic work includes Dirty Money: Cartel Bank (Netflix Original), Dogs: The Protectors (Netflix Originals), and Through Our Eyes: Homefront (HBO/Max and Sesame Workshop) and the short film “I Am Not Going To Change 400 Years in Four”, co-directed with Angela Tucker (ITVS/ Independent Lens). She is a member of AMPAS, the Directors Guild of America, and has received grant support and/or fellowships from Tribeca Film Institute, Sundance Institute, Ford Foundation, Chicken & Egg Pictures.

Sofian Khan is an Emmy-nominated filmmaker and founder of Capital K Pictures. He directed, produced and shot THE INTERPRETERS, a feature-length documentary following Afghan and Iraqi interpreters targeted for their work helping American forces that made its broadcast premiere on the 2019 season of Independent Lens. His episode of the PBS American Masters series IN THE MAKING (2021) received a Webby Award and an NAACP Image nomination. Most recently, Sofian directed an episode of the new series TAKEOUT WITH LISA LING (2022) on HBOMax, and is currently in production on several new projects under the Capital K Pictures banner.