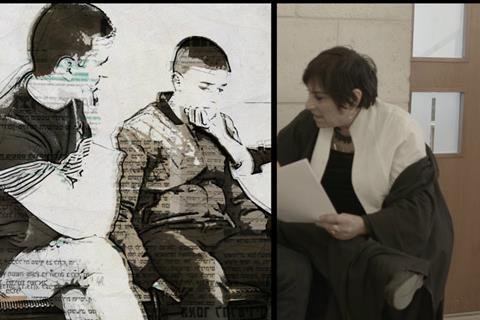 The film, recently included on the Oscars shortlist for Best Documentary Feature, is now playing at the Quad Cinema in New York City and Laemmle Royal in Los Angeles and has a 100% Fresh rating from film critics on Rotten Tomatoes.

An original, provocative film that both exposes the human fallout of the Israeli-Palestinian conflict and provides hope for a just resolution, Advocate was nominated for a Grand Jury Award at the 2019 Sundance Film Festival. It has also captured accolades and awards at numerous other international film festivals, including "Best Israeli Film" at the DocAviv Film Festival, the Jury Prize at the Hong Kong International Film Festival, the Golden Horn at the Krakow Film Festival and the FIPRESCI Prize and Golden Alexander at the Thessaloniki Documentary Film Festival. The film won the best documentary feature awards from the Asia Pacific Screen Awards and the Israel Documentary Forum Awards.

The deal was negotiated by Michael Rosenberg of Film Movement, the film’s U.S. distributor, along with Cinepil, on behalf of the filmmakers, and Justine Nagan and Chris White on behalf of POV.

A political firebrand in her home country, Israeli defense attorney Lea Tsemel is known by opponents as "the devil's advocate," for her decades-long defense of Palestinians who have been accused of resisting the occupation, both violently and non-violently. The thought-provoking, heart-wrenching, Advocate, from filmmakers Rachel Leah Jones and Phillipe Bellaïche, both captures Tsemel in cinema verité fashion fighting on behalf of her clients in Israel's challenging two-tier justice system and delves into Tsemel's history revisiting her landmark cases.

"We at POV have been tracking Advocate since its early stages of production, and it was clear from the outset that it was sure to arouse robust conversation about what it means to be uncompromising and unapologetic as a human rights defender — in Israel and beyond," said Justine Nagan, executive producer/executive director of POV/American Documentary. "The film's protagonist, attorney Lea Tsemel, who has been doing this work for five decades, is undoubtedly controversial. However, she is also undoubtedly inspiring. Self-defined as an 'angry optimistic woman' she models an engaged form of citizenship that we are seeking in these tumultuous times."

From feminists and fundamentalists to non-violent demonstrators to armed militants, Lea Tsemel defends Palestinians. As a Jewish-Israeli lawyer who has represented political prisoners for nearly 50 years, Tsemel, in her tireless quest for justice, pushes the praxis of a human rights defender to its limits. In Advocate, Jones and Bellaïche juxtapose one of Tsemel's current cases, the defense of a minor accused of attempted murder, with several of her past cases, including one that was as much personal as it was political wherein she defended her activist husband. Animated sequences conceal defendants' identities as Tsemel frankly addresses their best possible chances for a fair trial, while interviews with Tsemel's adult children reveal her unique ability to see the humanity of those accused. Frequently subjected to harsh criticism in the Hebrew press and in the public view, Tsemel remains optimistically steadfast in her belief that justice can be served.