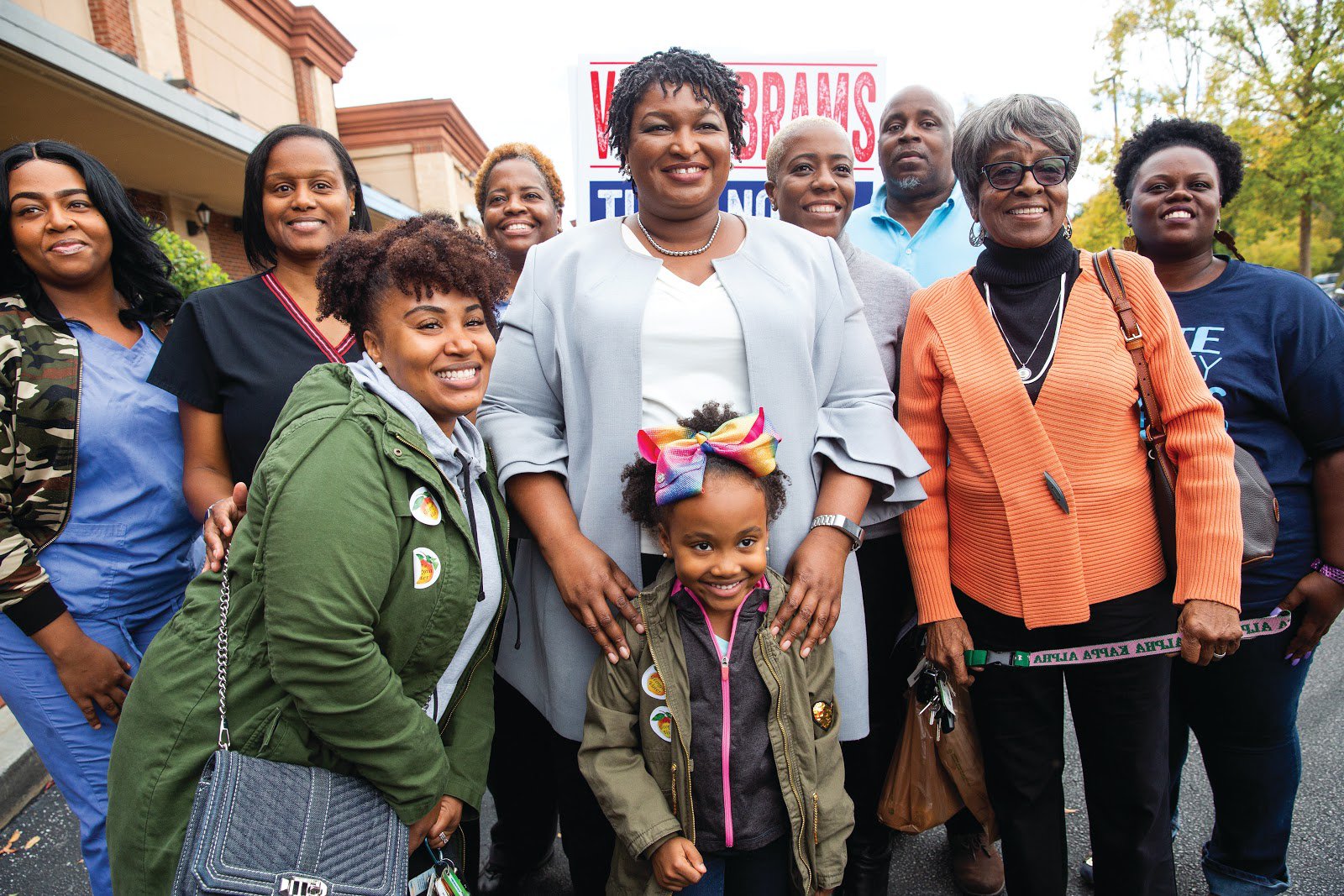 In a polarized America, where the dual forces of white supremacy and patriarchy threaten to further erode our democracy, a game-changing transformation is happening at the grassroots. As demographics shift toward a non-white majority, elections will be decided by Americans inspired to vote for the first time. Many of these voters, who are often black, brown, immigrant or poor, are ignored by politicians and journalists alike.

And She Could Be Next, directed by Grace Lee and Marjan Safinia, has its national broadcast debut on the PBS documentary series POV and pov.org on Monday, June 29, 2020 and Tuesday, June 30, 2020 at 9 p.m. (check local listings).

And She Could Be Next, a two-part documentary series directed by Peabody Award-winner Grace Lee (American Revolutionary: The Evolution of Grace Lee Boggs) and Iranian documentary filmmaker Marjan Safinia (Seeds), tells the story of a defiant movement of women of color who are transforming American politics from the ground up. The documentary series, filmed from 2018 through 2019, follows forward-thinking candidates and organizers across the country, asking whether democracy itself can be preserved —and made stronger— by those most marginalized. The series is centered on individuals at the heart of the movement behind the New American Majority, including: Stacey Abrams (Georgia), Bushra Amiwala (Skokie, IL), Maria Elena Durazo (Los Angeles, CA), Veronica Escobar (El Paso, TX), Lucy McBath (Atlanta, GA), Rashida Tlaib (Detroit, MI) and Nse Ufot, Executive Director of the New Georgia Project. And She Could Be Next, features an entirely women of color creative team and credits contributing field directors: Yoruba Richen, Geeta Gandbhir, Amber Fares, Deborah Esquenazi, Ramona Emerson and Anayansi Prado.

“Episode One: Building The Movement” opens with the powerful reminder that “women of color have been the backbone of our communities forever.” An energetic montage of modern American civil rights movements–from women’s suffrage to Stonewall, Black Lives Matter to Standing Rock–brings us to the 2018 midterm elections where a new generation of women of color is ready to take the lead. The documentary goes behind-the-scenes at local rallies, war rooms and church basements, where candidates and organizers embark on the campaign trail. We also witness the unique challenges they face, from well-resourced incumbents to systemic barriers that disproportionately affect black, brown and immigrant communities. As we get to know these women, we see how they do not live “single issue lives” but are each a product of a larger movement–one that is coalition-based, intergenerational and interfaith. (RT: 112 mins.)

“Episode Two: Claiming Power” takes us to the weeks leading up to election day and focuses on how organizers combat voter suppression in their own communities. At the heart of the episode is a growing multi-ethnic coalition in Georgia, a state with a rich history of civil rights organizing and poised to be a “majority minority” state as early as 2025. In addition to the New Georgia Project, groups like Mijente and Asians for Abrams put boots on the ground to address language barriers, poll purges and “exact match” laws that impact thousands of voters across the state. As results roll in, there is celebration for some and disappointment for others–but for these community organizers, the work does not stop when the polls close. Through it all, these women present a collective vision of political power that is rooted in care, dignity and joy, and remind us that there is an organizer in all of us. (RT: 83 mins)

Grace Lee, Director/Producer And She Could Be Next

Grace Lee directed and produced the Peabody Award-winning AMERICAN REVOLUTIONARY: THE EVOLUTION OF GRACE LEE BOGGS about the legendary civil rights activist which The Hollywood Reporter called “an entertainingly revealing portrait of the power of a single individual to effect change.” The film won multiple festival audience awards and was broadcast on the PBS documentary series POV. Other directing credits include the Emmy-nominated MAKERS: WOMEN IN POLITICS for PBS; the interactive online documentary K-TOWN ‘92 about the 1992 Los Angeles civil unrest, OFF THE MENU: ASIAN AMERICA; and the feature film JANEANE FROM DES MOINES, set during the 2012 presidential campaign, which premiered at the Toronto Film Festival. She has been a Sundance Institute Fellow, a 2017 Chicken & Egg Breakthrough Award winner, an envoy of the American Film Showcase and is co-founder of the Asian American Documentary Network. She recently directed and produced two episodes of PBS’ five-part series ASIAN AMERICANS which broadcasts nationally in May 2020. Click here to access Lee’s website.

Marjan Safinia, Director/Producer And She Could Be Next

Marjan Safinia is an Iranian documentary filmmaker whose films examine identity, community and social justice. BUT YOU SPEAK SUCH GOOD ENGLISH explores the first-generation immigrant experience from an insider perspective. SEEDS, tells the story of ten brave teenagers from the world’s most troubled conflict zones living side-by-side for one life-changing summer. Collectively her films have played at over 100 international film festivals and been broadcast in North America, Europe and across the Arab world. Most recently she produced and directed work for Google Founder Sergey Brin, the Obama administration, and Hillary Clinton’s Next Generation. Until 2018, Marjan was the longest-serving President of the Board of Directors of the International Documentary Association (and the only woman of color to lead this organization since it was founded in 1982). She currently serves on the Board of Directors of Chicken & Egg. She co-hosts the pre-eminent online documentary community, The D-Word, and is a regular juror, programmer, speaker and connector of all things documentary. Click here for more information about Safinia.

Jyoti Sarda, Producer And She Could Be Next

Jyoti Sarda brings twenty years as a senior-level global marketing executive with major studios and blue-chip brands to the development of impact-creating, documentary and narrative content. She is Co-Executive Producer of EQUAL MEANS EQUAL, an award-winning documentary feature that is an unflinching examination of the discrimination against women built into the US legal system. Until recently, Jyoti was Vice President of Marketing at Paramount Home Media where she led all facets of global marketing operations for Paramount partner brands, while overseeing international acquisitions. Prior to Paramount, she worked at Twentieth Century Fox Home Entertainment. Jyoti serves on the boards of GlobalGirl Media, an organization that trains young women to become civically engaged through citizen journalism and LAANE, a leading LA-based social justice nonprofit. She is intently focused on improving the diversity of elected officials and the electorate. Click here for more information about Sarda.

Ava DuVernay, Executive Producer And She Could Be Next

Academy Award nominee and winner of the Emmy, the BAFTA and the Peabody, Ava DuVernay is a writer, director, producer and film distributor. Her directorial work includes WHEN THEY SEE US, nominated for 16 Emmys, the Oscar-winning historical drama SELMA, the Oscar-nominated criminal justice documentary 13TH and Disney’s A WRINKLE IN TIME, with which she became the highest grossing African American woman director in domestic box office history. She also oversees production of her hit TV series QUEEN SUGAR. Winner of the 2012 Sundance Film Festival’s Best Director Prize for MIDDLE OF NOWHERE, DuVernay amplifies the work of people of color and women of all kinds through her independent film collective ARRAY, named one of Fast Company’s Most Innovative Companies. In 2017, she was featured as one of Fortune Magazine’s 50 Greatest Culture Leaders and TIME Magazine’s 100 Most Influential People. DuVernay sits on the boards of Sundance Institute and Film Independent. Click here to access DuVernay’s website.

We live in politically polarizing times. Like many Americans, we have spent the past few years trying to make sense of this moment. As a predominantly all-woman of color team, we are acutely conscious of the rise of patriarchy and white supremacy, and equally attuned to the rapid “browning” of America. Our democracy needs to be more reflective of the people it represents. Women of color building and claiming political power, whether as candidates or organizers, felt like the story nobody was telling in the wake of the 2016 election. A story that was bigger than the Pussyhat Project™, and much more intersectional. A story that went beyond simply talking about black and white issues. The growing New American Majority is the story that will shape our political discourse for generations to come.

And She Could Be Next explicitly centers race and gender in a much-needed political conversation. There’s not an issue that Americans face that isn’t worse if you’re black or brown. Many of these people feel unseen. Building a country that includes the nearly half of American voters who don’t engage in the political system is the most important strategy for rebooting our democracy. When we build a system that works for the most marginalized, we build a system that works for all.

In late 2016 and through 2017, we undertook a complex research project to find the right people to follow for our story. It was important they be women of color and embody the idea of changing the narrative in this country. Women who lived at the intersection of the issues keeping us awake at night—islamophobia, immigration, gun violence, racism, sexism. We wanted to find diversity not just in ethnic backgrounds, but also in geography, age and experience. The candidates we followed all made history with their elections and have continued to dominate the headlines. Each comes from long traditions of political organizing and running for office is the evolution of that path. We see organizers as an equally critical part of any political movement, and believe their stories deserve to be told. Together, as candidates and organizers, they are one movement, writing a dynamic new playbook for inclusive democracy where absolutely nobody is waiting to be saved.

From the first frame to the last, the screen is filled with women and people of color of every kind. All too often when this happens in documentary, the stories we see are of communities in crisis or in victimhood. On our screen, the audience sees themselves reflected in their power, their joy, their labor, their vulnerabilities and their brilliance. If you’re an immigrant, a young person, a person of faith, or simply someone who has felt unseen for too long, you will recognize yourself in this story. We cannot underestimate the profound effect this project has had on all of us. We all have the ability to move people, build community and make the change we want to see in the world. There’s an organizer in all of us.