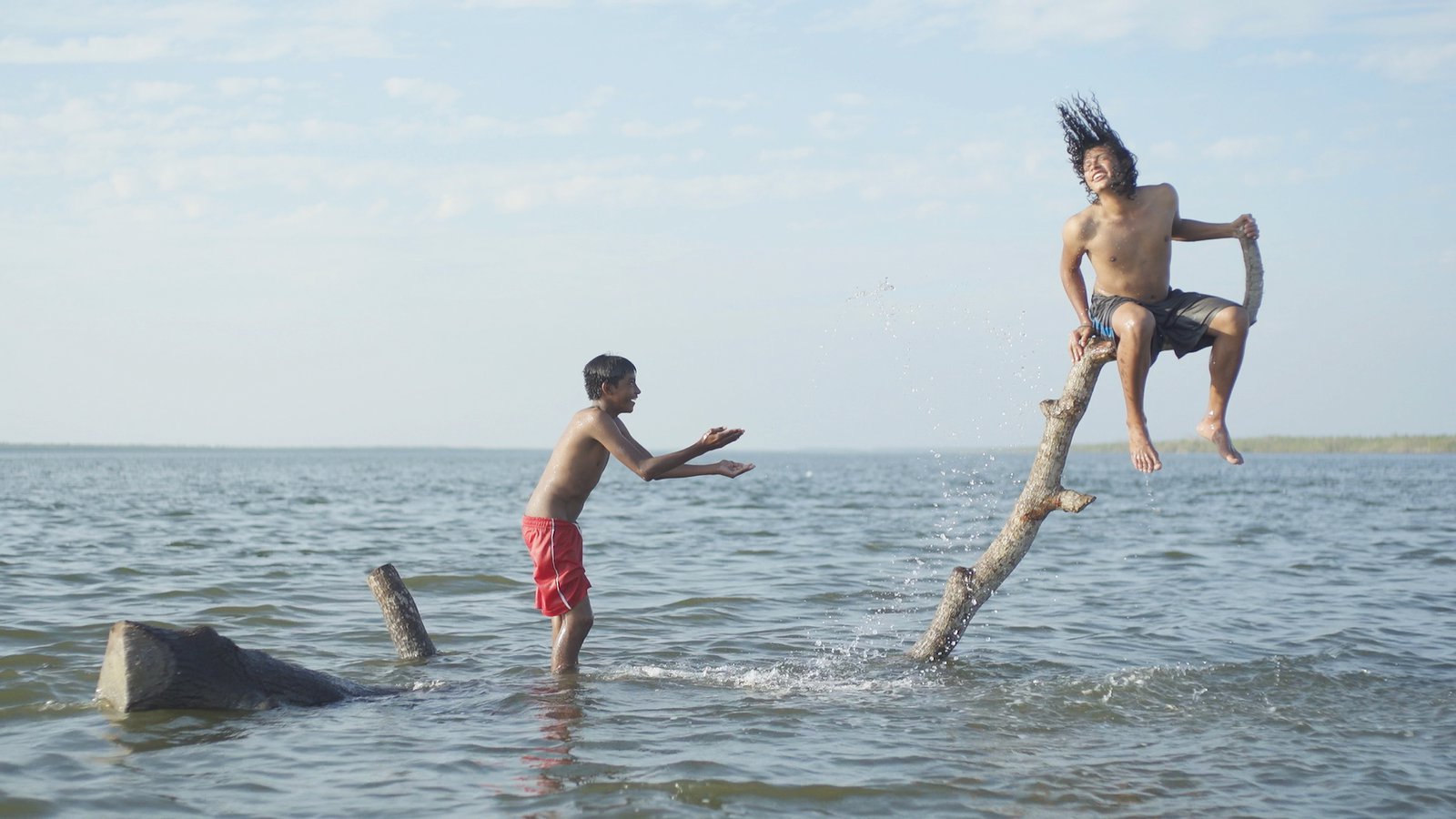 POV returns to PBS in July with its 34th season, a slate of films that reaffirm public media’s vital role in sparking national dialogue and featuring seven powerful and critically-acclaimed Latin American and Latinx-focused documentaries, making up more than half of this year’s lineup and co-presented with Latino Public Broadcasting. Out of the thirteen titles programmed for Season 34, the majority are by Latin American or U.S. Latinx filmmakers, marking a historic moment for Latinx narrative representation on PBS and public television more broadly.

America’s longest-running documentary series' newest season follows artists, activists, elders, comedians, frontline workers and politicians across the globe as they navigate their personal stories and the larger histories under which they take shape. As in past seasons, POV continues its longstanding commitment to Latin American and U.S. Latinx filmmakers and narratives by presenting the broadcast premieres of seven powerful documentaries that prioritize intersectional Caribbean, female, indigenous, and U.S. Latinx perspectives.

This year, more than half of POV films were directed by filmmakers of color and women, trans or gender non-conforming filmmakers, including five of the seven Latin American and U.S. Latinx titles. All films are accompanied by educational resources and will be available to stream on all PBS platforms including PBS.org, and the PBS Video App. Premieres continue through fall 2021 with primetime specials in early 2022.

Additional titles, including the fourth season of POV Shorts and streaming and interactive projects, will be announced throughout the year.

“Since POV’s inception nearly 35 years ago, the series’ mission has been simple: to use public television to meet the moment. This season's spotlight on Latin American and Latinx voices reflects our goal to ensure that a wide diversity of perspectives is represented both in front of and behind the camera,” said Erika Dilday, the incoming executive director of American Documentary (AmDoc) and new executive producer of POV. Ms. Dilday was previously the CEO of Futuro Media Group, founded by award-winning Latina journalist Maria Hinojosa.

“We are delighted to have six LPB-funded films in POV’s upcoming season, particularly Fruits of Labor, the first-ever co-presentation of POV and our signature series, VOCES,” said Sandie Viquez Pedlow, Executive Director of Latino Public Broadcasting. “These remarkable films offer viewers an up-to-the-minute look at the diversity of the Latino experience, from Puerto Rico to Peru, Colombia to California, Texas to the Domincan Republic.”

Throughout its history, POV has featured landmark films by Latin American and Latinx filmmakers including Señorita Extraviada by Lourdes Portillo, Nostalgia for the Light by Patricio Guzmán, El Velador by Natalia Almada, 306 Hollywood by Elan and Jonathan Bogarín, Memories of a Penitent Heart by Cecilia Aldarondo, Reportero by Bernardo Ruiz, and Presumed Guilty by Roberto Hernández, Layda Negrete and Geoffrey Smith.

POV’s Latin American and U.S. Latinx selection kicks off on Monday, July 12 with Cecilia Aldarondo’s Landfall. The documentary, which will return to this year’s edition of the Tribeca Film Festival after having had its World Premiere cancelled last spring, offers a kaleidoscopic look at the corruption of Puerto Rican bureaucracy and the resilience of its people as hope for stateside help disappears and communities throughout the island band together to rebuild what was lost after Hurricane María. Capturing the tension of an island fighting for its future amidst growing inequality and encroaching technocracy, Landfall provides shard-like glimpses of post-María Puerto Rico to examine the perimeters of a transformed world.

“Landfall is a cautionary tale about unjust recovery, and what happens when powerful interests try to privatize public services in the wake of disaster,” Aldarondo says. Among many other accolades, the documentary has also been nominated for an Independent Spirit Award.

In furthering its mission to amplify works by directors of Caribbean-descent and center human rights narratives from the region, POV will also present the broadcast premiere of Michèle Stephenson’s Stateless. The award-winning documentary uncovers the complex racial histories and contemporary politics of Haiti and the Dominican Republic by following the grassroots campaign of a hopeful young attorney named Rosa Iris. In 1937 tens of thousands of Haitians and Dominicans of Haitian descent were exterminated by the Dominican army based on anti-black hatred fomented by the Dominican government. Fast-forward to 2013 and the Dominican Republic’s Supreme Court has stripped the citizenship of anyone with Haitian parents, retroactive to 1929. The ruling rendered more than 200,000 people stateless, without nationality, identity or a homeland. In this dangerous climate, Rosa Iris mounts a movement to challenge electoral corruption and fights to protect the right to citizenship for all people. Stateless is also an official selection of this year’s Tribeca Film Festival.

Spotlighting contemporary indigenous Amazonian perspectives with the nuance required, Núria Frigola Torrent’s The Song of the Butterflies follows Rember Yahuarcani, an Indigenous painter from the White Heron clan of the Uitoto Nation in Peru. Rember left home to pursue a successful career in Lima, but when he finds himself in a creative rut, he returns home to his Amazonian community of Pebas to visit his father, a painter, and his mother, a sculptor. Through the stories and dreams of his parents and his grandmother, he confronts the horrors his community faced as a result of the rubber boom in Peru, immersing himself in the past so that he can rediscover his creativity.

A co-production of POV and VOCES,Fruits of Labor by Colombian-American director Emily Cohen Ibañez follows Ashley Solis, a Mexican-American teenager living in an agricultural town on the central coast of California. Ashley dreams of graduating high school and going to college, but when ICE raids in her community threaten to separate her family, Ashley is forced to become the breadwinner of her family, working days in the strawberry fields and the night shift at a food processing company.

Another international feature, Oscar Molina’s La Casa de Mama Icha tells the story of Mama Icha who, decades earlier, moved to the United States to help her daughter with the care of her grandchildren. Now, as she nears the end of her life, all she can think about is moving back home to Mompox in northern Colombia. Against the wishes of her family in Philadelphia, Mama Icha boards a plane and flies back to Colombia where she meets her sons, Gustavo and Alberto, who’ve been in charge of her house. Following the family conflicts that ensue, La Casa de Mama Icha is a bracing and tender story of dreams deferred and what it means to live with a divided sense of home.

Representing Mexico comes Bruno Santamaría’s powerful coming-of-age narrative Things We Dare Not Do. In the small Mexican coastal village of El Roblito, 16-year-old Ñoño lives what seems to be an idyllic existence with his loving family. But he holds a secret. Defying gender norms, Ñoño works up the courage to tell his family he wants to live his life as a woman, a fraught decision in a country shrouded in machismo and transphobia. The second feature film from director Santamaría, Things We Dare Not Do takes one young person’s struggle for self-determination out of the usual urban setting, providing a fresh perspective on the issue and a moving tale of personal emancipation.

Returning to mainland United States and rounding off this season’s U.S. Latinx offerings, Maya Cueva and Leah Galant’s On the Divide hones in on the site of ongoing contestation between Pro-Life protestors and Pro-Choice activists in McAllen, Texas: the last reproductive health clinic on the Texas/Mexico border. On the Divide follows three Latinx residents of McAllen on both sides of the divide whose lives revolve around the clinic. As threats to the clinic and their personal safety mount, our three characters are forced to make decisions they never could have imagined. The documentary is also an official Tribeca Film Festival selection.

In addition to this potent selection of Latinx and Latin American films, POV will also be presenting the broadcast premieres of five other timely and urgent documentaries that offer nuanced perspectives on contemporary social, political, and cultural issues in this country. The titles, including CJ Hunt’s The Neutral Ground, which investigates Confederate-defenders and their readings of history, Elegance Bratton’sPier Kids, which follows the queer and trans youth of color who have made Christopher Street Pier their own, and Ashley O’Shay’s Unapologetic, which tells the story of Black abolitionists fighting to hold Chicago officials accountable after two police killings, will be of interest to broader Latinx communities for their exploration of American myth-making, community resistance, and the forging of spaces of belonging in the face of discrimination and adversity.

Broadcast on the national PBS schedule, POV is available to millions of viewers on-air, online and in communities. To support educators and parents tackling remote learning, POV will produce educational resources for every episode, including lesson plans, discussion guides and reading lists with several materials available in Spanish.

In New York City, queer and trans youth of color make the Christopher Street Pier their own. Winner Truer Than Fiction Award at the Independent Spirit Awards.

The Song of the Butterflies directed by Núria Frigola Torrent

In central California, a Mexican-American teen goes to work when ICE raids threaten her family. A co-production of POV and Latino Public Broadcasting, co-presented by POV and VOCES. Official Selection SXSW Film Festival.

Mama Icha returns home to Colombia, finding heartbreak and joy after decades in the U.S.
A co-presentation of Latino Public Broadcasting.

Things We Dare Not Dodirected by Bruno Santamaría

In a Mexican coastal village, 16-year-old Ñoño has a secret that defies gender norms.

After being diagnosed with ALS, Ady Barkan launches a national movement for healthcare.

On the Divide directed by Maya Cueva and Leah Galant

The lives of three Latinx people intersect at the last abortion clinic on the border. A co-production of POV and Latino Public Broadcasting. Official Selection Tribeca Film Festival.

Produced by American Documentary, POV is the longest-running independent documentary showcase on American television. Since 1988, POV has presented films on PBS that capture the full spectrum of the human experience, with a long commitment to centering women and people of color in front of, and behind, the camera. It's on POV where American television audiences were introduced to groundbreaking works like Tongues Untied, The Act of Killing and American Promise and innovative filmmakers including Jonathan Demme, Nanfu Wang, and Laura Poitras. In 2018, POV Shorts launched as one of the first PBS series dedicated to bold and timely short-form documentaries. All POV programs are broadcast nationally on PBS, POV.org and the PBS Video app.