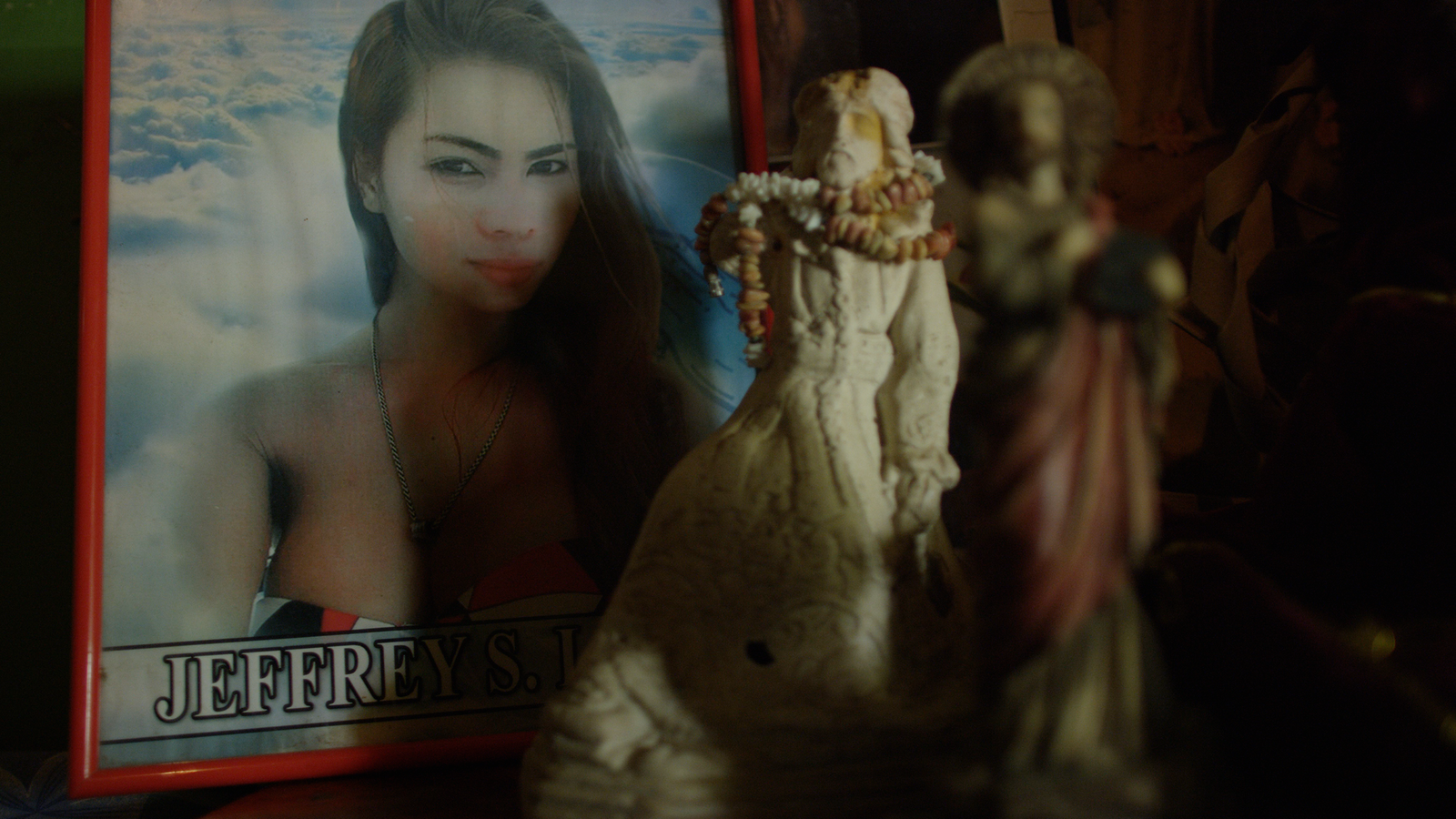 An Intimate Pursuit of Justice for the Murder of a Transgender Woman in ‘Call Her Ganda’ premieres Monday, July 1, 2019

Activists take a hardened look at U.S. Imperialism to galvanize a political uprising

When 26-year old Filipina transgender woman Jennifer Laude, is found dead with her head plunged into a motel room toilet, the perpetrator is quickly identified as 19 year-old U.S. marine Joseph Scott Pemberton. A military recruit in an unfamiliar land, Pemberton was on “liberty leave” when he solicited Jennifer at a disco. On discovering that Jennifer was transgender, he brutally murdered her, leaving her to be found by her friend and the motel receptionist.

Amidst a media storm and police inquiry, as Jennifer’s family copes with their loss, three women intimately invested in the case, pursue justice, taking on hardened histories of U.S. imperial rule that have allowed previous American perpetrators to evade consequence: An activist attorney, Virgie Suarez, labors to reveal the truth of Jennifer’s death from inside the courtroom, despite strategic silences and sly legal maneuvers from Pemberton’s defense team.

A transgender investigative journalist, Meredith Talusan, is determined to bring international attention to the case, writing sharp, in-the-fray essays for VICE, The Guardian and Buzzfeed. And Jennifer’s normally reserved mother, Julita, who finds herself at the affective center of a political uprising, rallies fellow protesters with a tenacious voice she never knew existed.

A modern David-and-Goliath story, Call Her Ganda follows a cast of willful women as they take on some of the most powerful institutions in the world. Fusing personal tragedy, human rights activism and the little-known history, and complex aftermath, of U.S. imperial rule in the Philippines, Call Her Ganda forges a visually daring and profoundly humanistic geopolitical investigative exposé.

“Call Her Ganda takes us beyond the investigative details of Jennifer’s murder and places it in context of a legacy of Western colonialism,” said Chris White, executive producer for POV. “It shows us that the deep-rooted pain behind the activism of the Filipino LGBTQ+ community carries with it historical implications into today. This is a fearless film highlighting the activists’ courage in fighting for justice for Jennifer.”

In December of 2014, I was fortunate enough to be invited by film auteur and scholar Nick Deocampo to travel to Manila to screen my previous two documentary features (Trinidad and Before You Know It) for the QC Pink LGBTQ+ Film Festival. Having only visited my parents’ homeland as a child, I was excited to return to the Philippines and to forge my own connections to the country and its local queer communities. When I arrived, I discovered a country struck with grief, outraged over the death of Jennifer Laude, a trans woman from Olongapo who was found murdered in a motel room. A U.S. marine was the leading suspect, but police authorities were unable to detain him, as he was protected by a Visiting Forces Agreement that gives the U.S. enormous latitude with cases concerning military personnel. While serving on a panel about LGBTQ rights at the festival, I met Attorney Virginia Suarez who was representing the Laude family. She told us about the case and shared a clip of Jennifer’s mother, “Nanay” (tagalog for “mother”), who spoke with raw passion, demanding justice for the death of her child. During the panel, someone suggested that a documentary about Jennifer needed to be made, and all eyes turned to me.

For years I’ve made work recognized in LGBTQ film circles, and somewhere along the way people started overlooking my Filipino heritage. Being both queer and Filipino-American shapes who I am and how I experience the world, and it’s important to me to honor my intersectionality by presenting stories from both communities. I’ve always wanted to make a film set in the Philippines, and having the opportunity to tell the story of Jennifer Laude and those who worked tirelessly to seek justice for her death not only spoke to me as a queer person of color, but also as a Filipino-American. This film integrates all aspects of my identity and I’m extremely thankful for being given this opportunity to tell an important story for so many people, including myself.

Inspired by my first encounters with Nanay and attorney Virgie Suarez, I initially intended just to follow them for my documentary. I was riveted by Nanay when she spoke of her daughter and about seeking justice for her death, and Virgie impressed me with her sharp legal skills, which matched her passion for cultural and policy change. However, after becoming aware of investigative reporter Meredith Talusan, it became clear to me that following Meredith would parallel my own investigative journey. Meredith would not only be able to ask the larger questions, but she’d be able to view the unfolding events from a unique perspective--having been born in the Philippines yet currently living in the U.S., and also being transgender. Meredith would be the perfect narrator to contextualize the cultural differences between the Philippines and the U.S. and to pinpoint the relevance and historical importance of the unfolding events.

Call Her Ganda is a protest against the extreme violence and discrimination that trans women face around the globe. It is a tribute to the 3.4 million Filipinos living in the U.S. and diaspora. And, it is a lesson for a global audience largely ignorant of the legacy of U.S. imperialism in my country of origin. As a Filipino American growing up in the U.S., where my history and identity have remained largely invisible, I am well aware of the devastating lack of knowledge about my homeland and its colonization. Relegated to the footnotes and margins of the history books, the Philippines has been unduly overlooked and vastly misunderstood. In making this film, I seek to educate the wider public, while also furthering my own knowledge of my cultural heritage.

PJ is an award-winning filmmaker and cinematographer whose work explores the overlooked subcultures and identities within the already marginalized LGBTQ+ community. Named one of Out Magazine's "Out 100" and Filmmaker Magazine's "25 New Faces of Independent Film," PJ’s film credits include Trinidad (Showtime, Logo) and Before You Know It, which follows the lives of three gay senior men, described by indieWIRE as "a crucial new addition to the LGBT doc canon." Before You Know It screened theatrically and broadcast premiered as the season finale of America Reframed on PBS, and was recently awarded the National Gay and Lesbian Journalist Association Excellence in Documentary Award 2016. Also an accomplished cinematographer, PJ shot the Academy Award-nominated Best Documentary Trouble the Water. PJ is a 2015 Guggenheim Fellow, 2016 Firelight Media Fellow, and a 2017 Robert Giard Fellow.

Marty is an Emmy-nominated filmmaker whose first film, Give Up Tomorrow (2011), premiered at the Tribeca Film Festival and won the Audience Award and a Special Jury Prize. The film went on to screen in over 75 festivals in 40+ countries, winning 18 major awards, and was broadcast around the globe, including the BBC, DR, SVT, Canal+ and PBS, as part of P.O.V.'s 25th anniversary season. The film was selected for the Puma Impact Award and was nominated for an Emmy Award for Outstanding Investigative Journalism. His second feature, Almost Sunrise, had its broadcast premiere on POV last November on Veterans Day. The film participated in Good Pitch Chicago, where over $100K was raised for the film and impact campaign.

Lisa Valencia-Svensson is an award-winning documentary film producer based in Toronto. Her first feature length documentary, HERMAN’S HOUSE, won an Emmy for Outstanding Arts & Culture Programming and was nominated for a Canadian Screen Award: Donald Brittain Award for Best Social/ Political Documentary. HERMAN’S HOUSE was broadcast on the PBS documentary series POV and on documentary channel in Canada. Her second feature MIGRANT DREAMS won the Canadian Hillman Prize, world premiered at Hot Docs, where it was a Top Ten Audience Favourite, and screened at DOXA where it received honorable mention for the Colin Low Award for Canadian Documentary. It was broadcast on TVO and is distributed by Cinema Politica. She associate produced several films, including THE WORLD BEFORE HER, which have garnered Emmy nominations and Canadian Screen Awards, have been broadcast internationally, and been screened and won awards at festivals including TIFF, Tribeca, Hot Docs and IDFA.

Kara Magsanoc-Alikpala is a broadcast journalist. She co-founded the video production company Storytellers International Inc. that has produced award-winning television specials and documentaries like “Batas Militar” (Martial Law). To date, it has been the highest rated documentary broadcast on Philippine Television. The documentary swept all major awards in the Philippines. It was a finalist at the International Documentary Festival in Amsterdam (IDFA), and a bronze medalist at the New York Film Festival. She is a contributing producer for ARD German Radio, Cable News Network (CNN) Hong Kong and Atlanta bureaus. She is a member of the Good Pitch2 Southeast Asia Team in Jakarta. She has produced documentaries for the History Channel, and the Australian Broadcasting Company. She has reported for the Public Broadcasting Service and Voice of America. Kara is based in Manila, Philippines.

Women's Equity Center and Action Network (WE CAN)