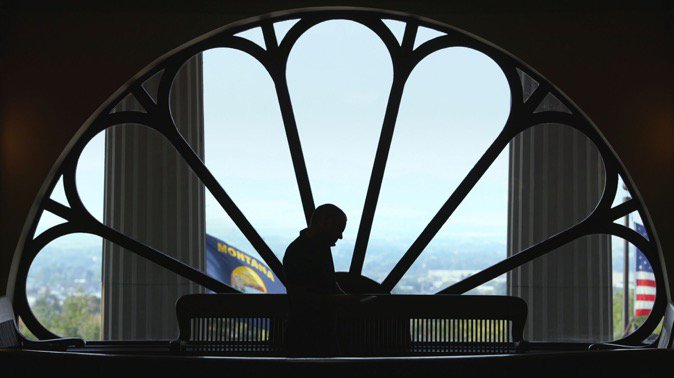 Your vote can be bought, but at what cost? Dark Money follows local Montana journalist John S. Adams, who is determined to uncover the truth about funding in his state’s elections. The film gains insights over the course of three election cycles, as it solves an increasingly complicated and blurred puzzle. Dark Money traces Adams’ steps and sheds light on the grassroots movement to unveil the mysterious financing behind our elections.

This award-winning independent film offers numerous perspectives on dark money donations—the unlimited campaign contributions from undisclosed donors, individuals and corporations, that have been allowed since the 2010 Supreme Court ruling on Citizens United. “Dark money is the advertising where you don’t know who's paying for the ads,” explains Llew Jones, a Montana state senator. “We’ve just simply got to hold these up and say, ‘Who is paying for this? What are they attempting to buy?’”

Filmmaker Kimberly Reed, whose family has lived in Montana for four generations, dives into these questions specifically as they regard the state. “People in this state had a good sense of history about the excesses of capitalism, because that’s essentially what it is. It’s in your face here. You can’t really ignore that,” says Cheri Maclean, a Montana voter.

In Montana, many of the voices against dark money are Republican. Debra Bonogofsky, a small business owner running for the Montana State House of Representatives on a campaign that promotes “fiscal responsibility” and small government, considers resisting dark money groups a matter of integrity: “If you don’t vote the way they want you to vote in the legislature they will target you the next primary,” she says, “even if you're a conservative Republican.”

John S. Adams, former capital bureau chief for the Great Falls Tribune and creator of the Montana Free Press, is the leading investigator featured in the film. He notes that when campaigns can receive unlimited sums from anonymous donors, hidden from public scrutiny, the consequences are clear: “Then it’s not the people controlling the government—it’s the government controlled by a corporation controlling the people, which is like super-crazy Big Brother, but it’s happening.” The film draws parallels between the local influence of dark money in Montana and the effects of corporate political spending on a national scale.

“This film will keep you on the edge of your seat,” said Justine Nagan, executive producer/executive director of POV/American Documentary. “Dark Money gives you a glimpse into what many of the most powerful people and groups don’t want you to see. It also gives voice to the many pioneers on both sides of the aisle in the crusade against unlimited, anonymous campaign contributions. In the run-up to yet another pivotal election season, this film is an important work examining some of the most crucial pillars of our democracy.”

Kimberly Reed’s work has been featured on The Oprah Winfrey Show, CNN, NPR, The Moth and in Details magazine. One of Filmmaker Magazine’s “25 New Faces of Independent Film,” she directed and produced Prodigal Sons, which landed on many best of the year lists, screened at more than 100 film festivals and garnered 14 audience and jury awards, including a FIPRESCI Prize. Reed was recognized as one of Out magazine’s “OUT100” and was number one on Towleroad’s “Best LGBT Characters of the Film Year” list. She also produced, edited and wrote Paul Goodman Changed My Life and produced The Death and Life of Marsha P. Johnson. Reed is a fourth-generation Montanan.