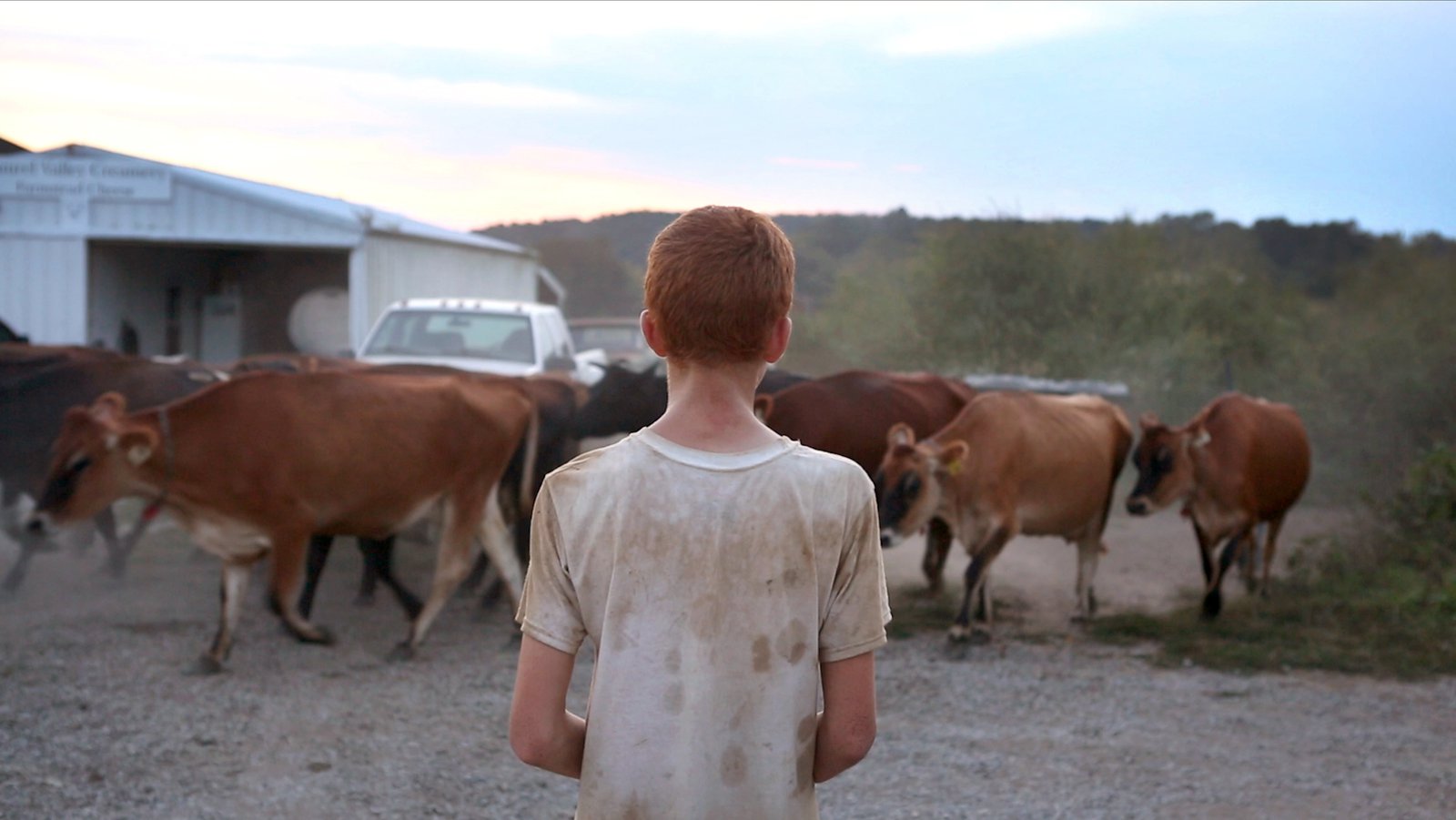 How are the Nolans doing now, and how is Laurel Valley Creamery? What was the family’s response to the film?

The Nolans are doing well, and time just keeps marching forward. Business has been consistent, and they’re thinking up creative ways to expand and keep up with demand. The kids are really growing into themselves. Edgar will be 16 in November. He has his driver’s license, is doing well in school, and still likes baseball and bowhunting. Gus is 14, loves hunting and fishing (so much he has his own youtube channel), and is a wheeler dealer who is always buying or selling something with a motor. Lilah is almost 11 and loves dance and baking - she and Celeste also just attended her first big concert to see her favorite musician, Lizzo. Harlan is 8 (which is wild to think about - he was 10 months old when the film started) and is obsessed with all things fishing.

The Nolans have been so supportive throughout this process. I think watching themselves on film is layered with a lot of emotions, but overall their response has been really positive. Nick and Celeste have both expressed their gratitude to have this era of their lives remembered in video form, and to be able to lend their experience to the bigger conversation around food and farm security. I’m curious to keep talking to kids about it over the years as their perceptions evolve.

You also grew up on a small family farm, and have talked about your sense of shared trust and understanding between you and the Nolans while making this film— how did you meet the Nolan family, and how did you come to make a film about them?

It was a winter morning, and I showed up at the local farmers market. It was cold, grey, and miserable outside, and the parking lot of covered in slush and snow. All of the other farmers had moved inside the mall except this one guy standing at a little card table with cheese samples - he had a bright red beard, a kind smile, layers piled on layers of thermals. I found out he and his wife Celeste had just started a cheese business, and that he believed himself to be too rugged for the comfort of the indoor farmers market. He was such a character. I soon met and bonded with the whole family, and started helping them out on the farm and at the farmers market. My background is in photojournalism, and I photographed them throughout the early years. The timing of our friendship aligned with a time when I was realizing just how deeply I felt called to work toward social and environmental justice through food and farming. We spent many hours plotting the revolution.

Fast forward a few years, I was working on various small farms and freelancing, and had this dream of learning video and making a documentary mini-series about food deserts - I wanted to compare and weave together stories of families in urban and rural food deserts. I started filming a few places and characters, and then spent a weekend filming the Nolans. It just aligned and became clear that there was some real magic happening. I just kept filming. When I started, I felt pulled into it – almost beyond my control and certainly beyond any rational thinking. I was financially struggling, in my mid-twenties, had never made a film before, lived seven hours away (I didn’t start filming until I had moved away from Ohio to North Carolina), and was totally naive about what the process would be like. It wasn’t until I was a few years in, with hundreds of hours of footage, that it seemed like a feature length film was possible.

Part of the glimpse that Farmsteaders gives us into the Nolans’ everyday lives is about breaking stereotypes towards rural Americans— was this always central to why you decided to make the film?

The representation of rural people is something that has always remained in my consciousness because it’s the representation of myself and my family as well. I grew up in a very blue collar, working-class class family - coal miners, car mechanics, metal workers, farmers, homesteaders - folks who smelled of auto grease and dirt, who questioned politicians and thought critically, and had this really special kind of old school wisdom and wit. As I grew up, entered a career in visual story telling, and moved around to a few affluent cities and towns, I was often taken aback by the way I heard people speak of rural folks. Over the years I grew more and more exhausted with shallow stereotypes and assumptions of rural people. I found myself feeling uncomfortable, an imposter, as I navigated well-educated, progressive, middle class spaces. The Nolans surprise a lot of people who assume they know who and what rural America is, and that was clear to me from the beginning. I don’t know that breaking stereotypes towards rural American was central to why I began this film, but it undeniably altered the lens through which I worked.

Were there any challenges or things particularly important to you during the process of representing the Nolans and their lives onscreen?

One challenge we faced in the edit room was in not glossing over the hardships of farming, but also not getting stuck on those challenges. We worked hard to strike a balance between the bliss and the struggle. That's so much what farming is. It's a grind, and the challenges feel endless sometimes, but living in rhythm with the land also offers so much wonder and joy. It's a way of life that is simultaneously independent and deeply connected. I think some folks have gotten used to the bucolic vision of farms they've been shown in advertisements and stories, and are shocked when they realize how difficult and messy it all is. And that's something I wanted to be honest about with Farmsteaders - farming is beautiful and hard. It's soul nourishing and messy. I wanted to share the perspective that hard isn't bad, and often the most worthwhile endeavors may also be the most difficult.

I’m currently starting an organic medicinal herb farm and orchard with my husband. We dream of hosting workshops for useful, traditional skills for living and healing, as well as community farm dinners, and an artist residency program focused on exploring concepts of social and environmental justice during this era of climate crisis. As far as visual work, I’ve been wading into the creative unknown of a new photography and writing project that explores motherhood during the Anthropocene.