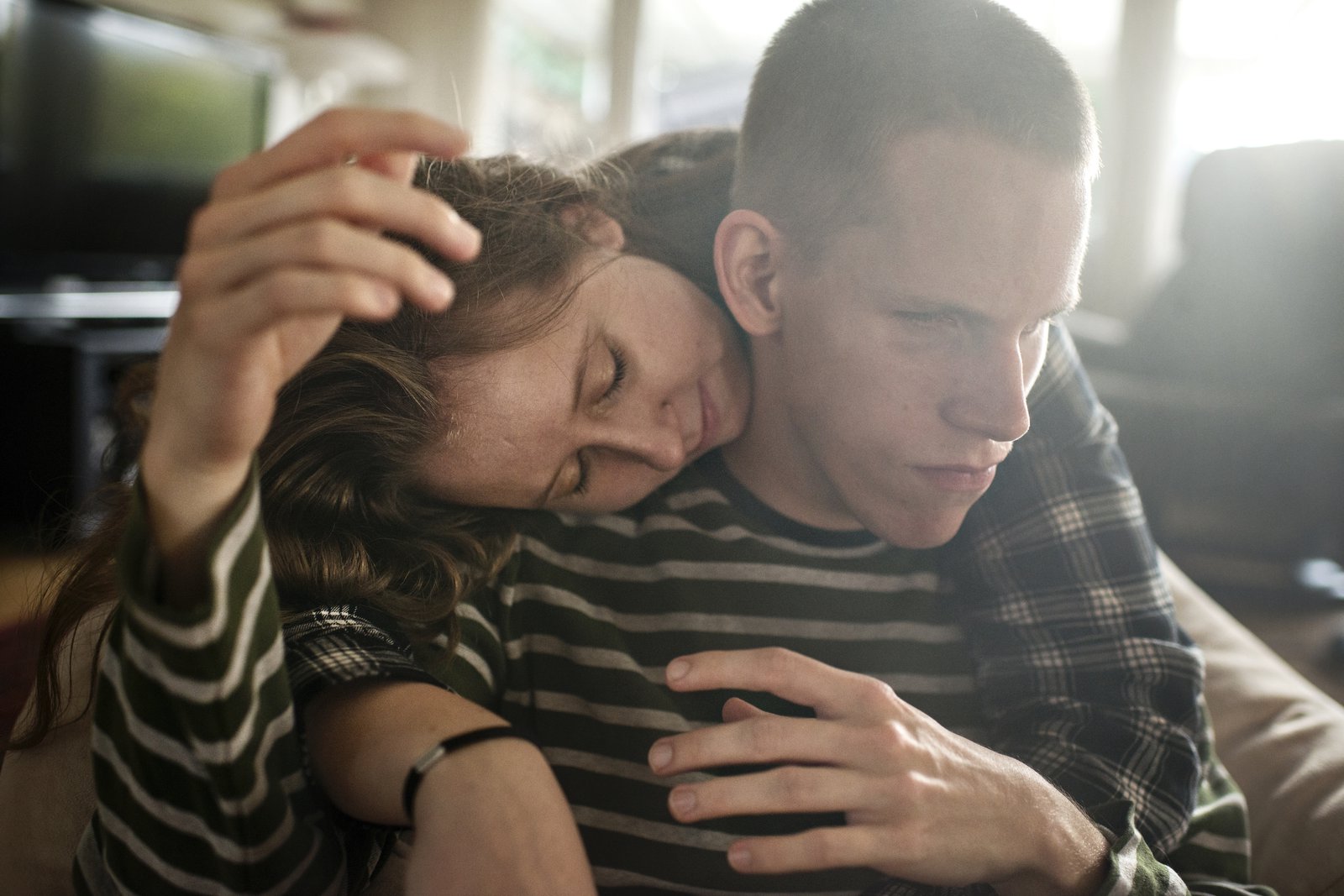 He’s My Brother is directed by Cille Hannibal and co-directed by Christine Hanberg who is the younger sister of Peter. The film is told through Christine who examines her role as a loving sister, as a future guardian, and what it means to be responsible for another person’s life. Peter, now 31 years old, was born deaf, blind and with autism, and experiences the world primarily through touch, smell, and taste. Tactile communication is essential in order to conduct any kind of activity, and as such, Peter requires a high level of oversight.

Until five years ago, a dedicated facility was able to help the Hanbergs take care of Peter, however, when it was shut down due to “restructuring,” Peter’s care fell entirely on his family’s hands. Lifelong care for a person with multiple disabilities, for whom the Danish healthcare system does not provide a full support structure, leaves its mark mainly on his mother, Jonna, and Christine. Because of them, Peter’s experience of life without images or sound, is full of stimuli and happy moments. Though Jonna and Christine give him all the love and care they can, caretaking has also had a curtailing effect on their own lives. He’s My Brother explores how Peter’s family works to assure Peter a dignified life once he and Christine’s parents are gone, as well as Christine's uncertainties about one day becoming his primary caregiver.

Director Cille Hannibal said: “I first met Christine, my co-director, back in 2015. She shared her incredible life story, telling me about her family and specifically, her brother Peter. Peter was born deaf, blind, and later placed on the autism spectrum. The first thing that caught my attention about Peter was his own unique world. How does he understand and experience life and the world around him without sight and the ability to hear? It brings me the same feeling as when trying to understand eternity. But when I met the rest of the family, another narrative quickly revealed itself. It was obvious that the greater story was love. The love Christine shows her brother, in taking on the responsibility of his care. For me, this is first and foremost a story about the power of being a family and standing up for one another. But, also how important it is to find your own path through life.”

Co-director Christine Hanberg said: “I got my first camera when I was 10 years old and ever since I have documented the lives of my family. I have always been really fascinated with Peter's world. He is missing two senses – and what does that actually mean? So, it was very natural for my family to be on camera because the camera has always been there. Seven years ago when Peter's daycare closed, he was without help. My mom had to quit her job and become Peter's full time caretaker, while my dad had to go to work and I helped as much as I could. The commune was given all the resources needed by the state to help us, but would or could not help us because they simply didn't have the right competence to do so. Weeks and months went on, so I grabbed the camera and started filming because I could not comprehend how much responsibility we as relatives have to take when the system fails. I think it has really come to people's attention that even though Denmark has one of the richest welfare states in the world, we still can’t not help the weakest. The film is important to see now because the problems we experience with a failed system don’t just apply to Denmark. It happens all over the world. Now, seven years have gone by and we still haven’t gotten any help at all. Not even one offer for daycare for Peter and I see so many people struggling with the broken system. They don’t get the help they have the right to get, or are entitled to. Now I hope that our film can start a discussion about basic human rights for people with disabilities and about how big a responsibility we as relatives should take. For my part, I will be there for my brother anytime. But what about those who do not have the opportunity or the time in their lives? If the system doesn’t help. Who will, then?”

“Family bonds run deep in this touching chronicle about caretaking, love, and finding one’s own path,” said POV’s Executive Producer Chris White. “Peter and Christine’s interdependence will prompt viewers to examine their own relationships with those they hold most dear.”

He’s My Brother, was produced by Final Cut For Real in co-production with Sant & Usant and American Documentary. Supported by TV2/Denmark, The Danish Film Institute, The Norwegian Film Institute, Fritt Ord Foundation, SVT and VGTV. Directed by Cille Hannibal, co-directed by Christine Hanberg and produced by Monica Hellström. The executive producers are Erika Dilday and Chris White for American Documentary.

Cille Hannibal was born in Copenhagen, Denmark. She has a degree as Documentary Director from the prestigious National Film School of Denmark and additionally studied at the Danish School of Media and Journalism. The Night We Fell was her debut film and was selected for CPH:DOX in 2018, nominated for a NORDIC:DOX award and BEST:SHORT at the prestigious festival, “Vision du Reel”, in Geneva in 2018. The film also ran on DR1. Working in the cross field between art and cinema, Cille premiered an art film at the National Gallery of Denmark in the spring of 2022. She is currently in production on a television show about the Danish popstar “Jada” which will premiere on Danish TV2 in 2023. Recent work includes: Margrethe (2015), a portrait of the Queen of Denmark, Margrethe II that aired on TV2 and Triatleten (2016).

Christine was born in Sorgenfri in 1993. She is a rising documentary director and started her own production company CH FILM AND PHOTO in 2016. She has a degree from the European Film College, in 2019. Christine has studied at the New York Film Academy and is now getting a bachelor’s degree in TV and Media Production at the Danish School of Media and Journalism. He’s My Brother is Christine’s first feature in collaboration with the documentary filmmaker Cille Hannibal. Christine’s next directorial project is the documentary Trine, which will premiere in 2022.

Monica Hellström is a member of The Academy of Motion Picture Arts and Sciences and was selected for Producer on the Move, Cannes 2020 and was awarded the prestigious ‘Ib award’ by the Danish Board of Film Directors in 2022. She started her company Ström Pictures in May 2022 and has been a producer at Final Cut for Real since 2010 and previously worked at Upfront Films and The Danish Film Institute's Film Workshop. Hellström was lead producer on the Sundance winning, Cannes official selection, three-time Oscar® and BAFTA nominated animated documentary Flee (2021) by Jonas Poher Rasmussen, A House Made of Splinters (Best director Sundance 2022, Best doc Götenburg) by Simon Lereng Wilmonts, and the Oscar shortlisted for Best Doc in 2018 The Distant Barking of Dogs. She graduated from EAVE Producer Workshop in 2010, holds an M.A. in film from the University of Copenhagen (DK) and a B.A. in film from the University of Bedfordshire (UK).