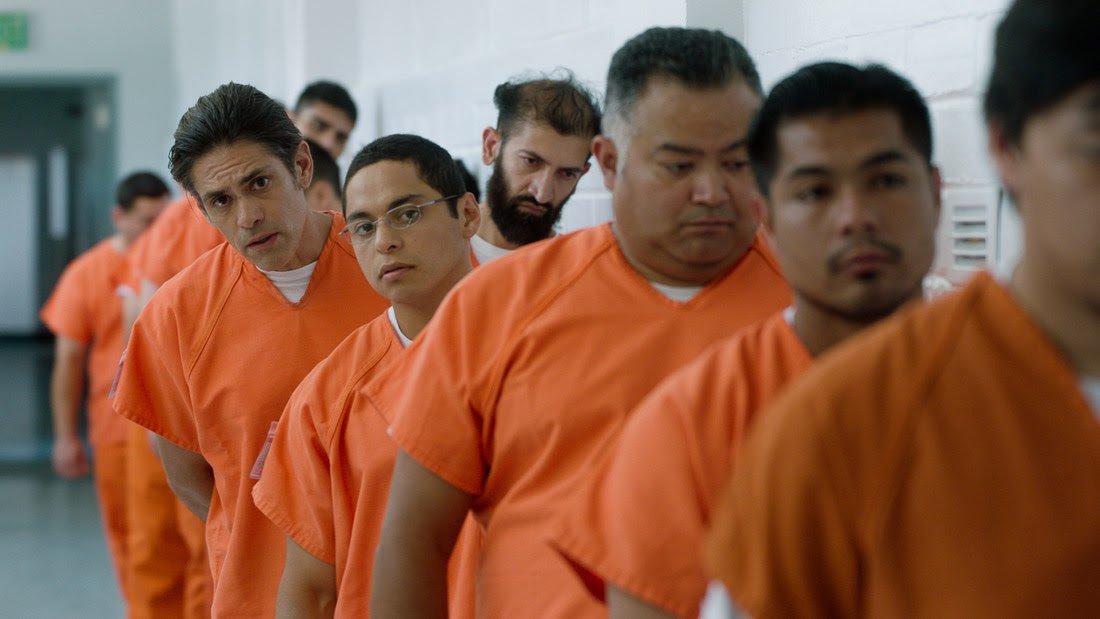 POV Presents An Unvarnished Look at a U.S. Immigration Detention Centers From the Inside, in Alex Rivera and Cristina Ibarra’s Docu-thriller Hybrid THE INFILTRATORS Debuting Monday, October 5, 2020 on PBS

New York, NY — September 17, 2020 — POV’s 33rd season is proud to present the national broadcast debut of the docu-thriller hybrid The Infiltrators, co-directed by Alex Rivera (Sleep Dealer) and Cristina Ibarra(Las Marthas, “Dirty Laundry: A Homemade Telenovela”) premiering Monday, October 5, 2020 on PBS at 10p.m. ET (check local listings) and atpov.org. The film will also be available to stream for free at pov.org until November 5, 2020.

Winner of both the 'NEXT Innovator' and 'Audience Award' at the Sundance Film Festival,The Infiltrators tells the true story of two young immigrants who in 2012 were detained by the U.S. Border Patrol—on purpose—and put in a shadowy for-profit detention center in Broward County, Florida. Marco Saavedra and Viridiana “Viri” Martinez, who have protected status through the Deferred Action for Childhood Arrivals program (DACA), are members of the National Immigrant Youth Alliance, a group of radical DREAMers who are on a mission to stop deportations. And the best place to stop deportations, they believe, is in detention facilities. However, when Saavedra and Martinez attempt a daring reverse ‘prison break,’ things don’t go according to plan. By weaving together documentary footage of the real infiltrators with re-enactments of the events inside the detention center, The Infiltrators tells an incredible and thrilling true story by way of a genre-defying cinematic language.

The activists that feature as protagonists — Saavedra, Martinez, and Claudio Rojas — were filmed as they planned and organized their campaign from a ‘safe house.’ Rivera and Ibarra then built the narrative around that documentary footage, additional interview material, community archival videos, broadcast news material and internal government documents that they obtained through a Freedom of Information Act request. Many of the film’s extras in the reenacted segments are undocumented or formerly detained individuals themselves. The filmmaking process, from start to finish, was designed to center the experiences of people whose perspectives are often left out of official renderings of the immigration process.

Having made films on issues surrounding the border and U.S.–Latin American immigration since the mid 1990s, Rivera started noticing something in 2010 that he’d never seen before: immigrants getting arrested on purpose, and risking their own deportation, as an act of political protest. Rather than living in the shadows, these young undocumented activists were choosing to make their situations highly visible as a means to demand political change and freedom to pursue a full life in the only country they knew.

“We live in a national reality in which hundreds of thousands of immigrants are being disappeared into for-profit detention centers, without trial, without attorneys representing them,” said Rivera. “Very few images of the insides of these facilities have leaked out—the corporations that run them tightly, control the flow of images. When we met the real-life activists—the infiltrators—we were captivated by their radical imagination. They had a bold plan for uncovering what was meant to remain in the shadows.”

“To tell this incredible true story we developed a new way of seeing,” said Ibarra. “Inspired by the ‘performance’ that eventually got the infiltrators detained, we used our documentary camera to follow the real people, and then worked with actors and a script to tell the story inside detention that was otherwise un-seeable. The vision and voice of undocumented leaders pushed us to develop a new visual language.

Rivera and Ibarra said: “With the 2020 presidential election fast approaching, the rights of America’s undocumented population have perhaps never before been such a hot-ticket item — or more at stake. We hope that our film inspires audiences to find visionary political solutions to the crisis of immigrant detention. It starts with seeing.”

"This film uses a bold creative approach to help audiences consider the myriad immigration and deportation issues the U.S. is facing in a new way," said Justine Nagan, Executive Producer/Executive Director of POV/American Documentary. “It’s a memorable, unexpected and challenging work of nonfiction cinema with a point of view - a classic POV in many ways. Co-director Cristina Ibarra is a POV alum, and we’re thrilled to bring her latest film to American audiences through PBS and through our community partners across the country.”

Since shooting the film, issues surrounding immigration have once again risen to the forefront of contemporary political conversation. With the 2020 presidential election fast approaching, the rights of America’s undocumented population have perhaps never before been such a hot-ticket item — or more at stake. Following The Infiltrators 2019 festival premiere, lead protagonist Claudio Rojas was detained and launched into deportation proceedings—a surreal mirroring of the film’s plot in real time—and has since been deported back to his home country of Argentina after twenty years in the United States. Family members and lawyers close to his case believe that Claudio’s arrest may have been directly linked to his participation in the film – and part of an illegal pattern of retribution by ICE against immigrant activists.

Alex Rivera is a filmmaker who’s been telling new, urgent, and visually adventurous Latino stories for more than twenty years. His first feature film, a cyberpunk thriller set in Tijuana, Mexico, SLEEP DEALER, won multiple awards at the 2008 Sundance Film Festival and the Berlin International Film Festival, and was released theatrically in the U.S. Rivera’s second feature film, a documentary/scripted hybrid set in and around an immigration detention center, THE INFILTRATORS, won both the NEXT Audience Award and the Innovator Award at the 2019 Sundance Film Festival and will be released theatrically in 2020. THE INFILTRATORS is being developed as a scripted TV series by Blumhouse Television. Rivera’s work has been supported by the Ford Foundation, the Tribeca Film Institute, the Open Society Institute, Creative Capital, and many others. Alex studied at Hampshire College, was the Rothschild Lecturer at Harvard University, and is currently a distinguished lecturer in Media Studies at Queens College.

Cristina Ibarra’s twenty-year film practice visualizes a border-crossing storytelling aesthetic rooted in her homeland of the Texas-Mexico border. Ibarra’s new feature documentary, THE INFILTRATORS, is a docu-thriller about undercover undocumented activists. It won the NEXT Audience and Innovator Awards at the Sundance Film Festival in 2019. The New York Times calls her previous award-winning documentary about South Texas border royalty, LAS MARTHAS, “a striking alternative portrait of border life.” It premiered on Independent Lens in 2014. Earlier, in 2008, USA Today described THE LAST CONQUISTADOR, her POV-broadcast feature documentary about a monumental sculptor with a tragic historical blindspot, as “heroic.” Her award-winning directorial debut, DIRTY LAUNDRY: A HOMEMADE TELENOVELA, was broadcast on PBS. She is the recipient of fellowships from the Rockefeller Foundation, NYFA, CPB/PBS, the Latino Producers Academy, Firelight, the Sundance Women’s Initiative and Creative Capital, among others. Ibarra is a 2019 Soros Art and a Rauschenberg fellow.

Produced by American Documentary, POV is the longest-running independent documentary showcase on American television. Since 1988, POV has presented films on PBS that capture the full spectrum of the human experience, with a long commitment to centering women and people of color in front of, and behind, the camera. It was on POV that American television audiences were introduced to groundbreaking works like Tongues Untied, The Act of Killing and American Promise and innovative filmmakers such as Jonathan Demme, Nanfu Wang and Laura Poitras. In 2018, POV Shorts launched as one of the first PBS series dedicated to bold and timely short-form documentaries.