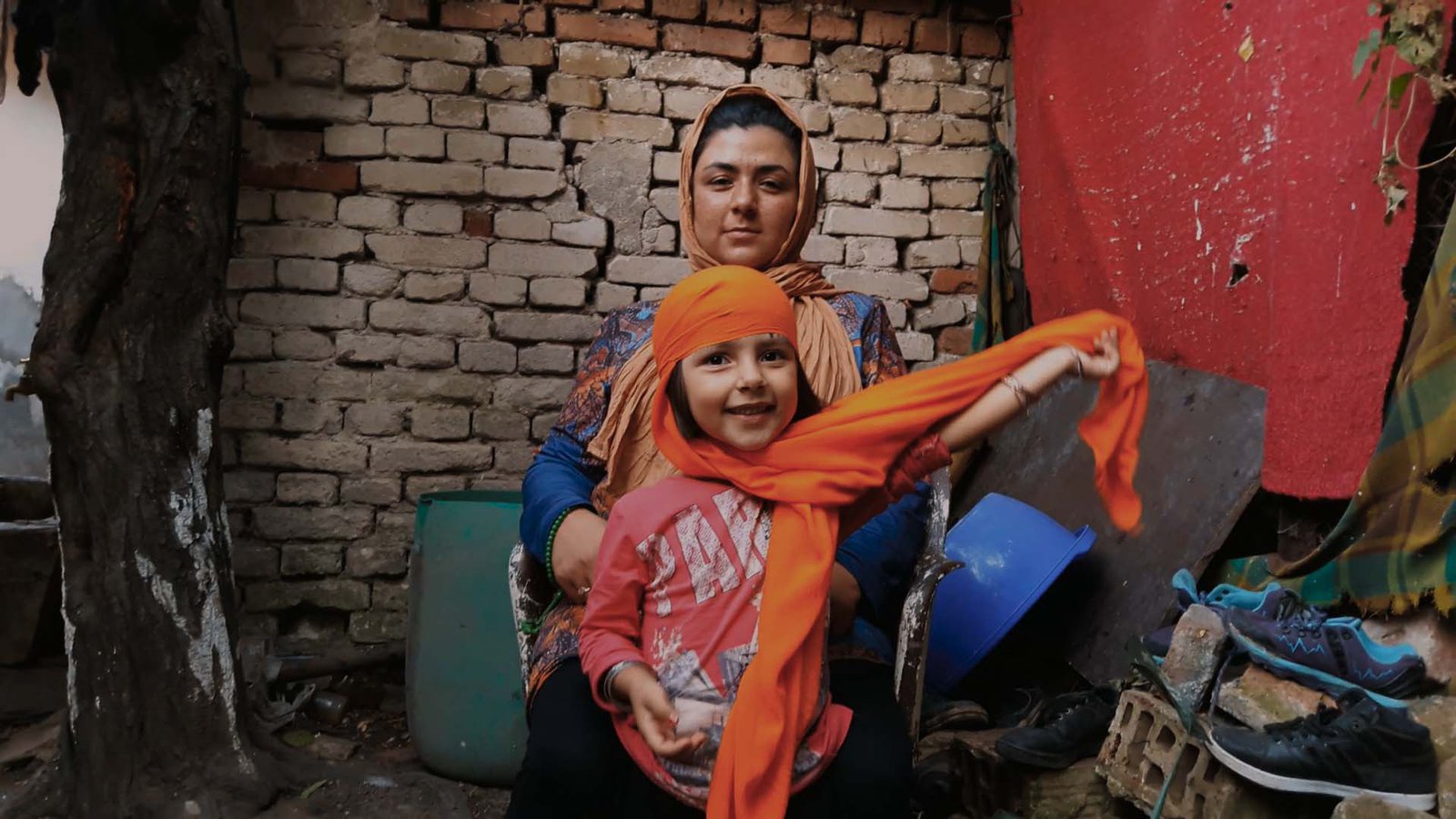 Fleeing from the Taliban, A Family Documents Their Own Journey in ‘Midnight Traveler’ premiering Monday, December 30, 2019

After Hassan Fazili’s documentary Peace aired on Afghan national television in 2015, the Taliban assassinated the film’s main subject and put a price on Hassan’s head. Immediately he knew he had to flee with his wife and his daughters. Over the course of their multi-year saga in search of safety, the family grasp onto the only means they have to assert control over their situation: the cameras on their phones.

In Midnight Traveler, a broken asylum system forces Hassan Fazili and his family onto the migrant route to Europe. Their trek begins in Tajikistan, where they are rejected for refugee protection and forced temporarily back to Afghanistan before winding their way along the notorious Balkan smuggling route through Iran, Turkey, Bulgaria, Serbia and Hungary. As they experience increasingly degrading circumstances, the family latches onto filmmaking as a way to not just survive, but to retain their humanity.

Crossing into Turkey from Iran, Hassan’s wife Fatima bravely captures undercover footage of Hassan negotiating with a potential smuggler. There are two choices, the smuggler explains: a “direct taxi” they can take with the rate depending on the route, or by boat, which will cost four thousand euros. Opting for the Balkan route, one of Europe’s most notorious smuggling channels, they discover the shocking perils of their chosen passage.

In a safe house in Sofia, the couple recounts for fellow refugees their harrowing confrontation with a smuggler who demands an additional two thousand dollars from the family by threatening to kidnap their daughters, Nargis and Zahara. Repeating the smuggler’s threats, Nargis later narrates, “I’ll take this daughter away. I’ll take the other one somewhere else. I’ll take your wife and imprison her. I’ll take you and beat you. Give me money.”

After being arrested, the family is placed in a Bulgarian migrant camp, crowded and unsanitary with food that makes the girls sick. Worse than that, anti-immigrant sentiment in Bulgaria is rising, and one night the family find themselves the victims of neo-Nazi violence—all captured by Hassan’s shaky camera.

On the migrant trail again and making their way into Serbia, the family is turned away from a series of overcrowded camps, sleeping in abandoned buildings before finally securing a spot in a camp. Life in the Serbian camp is marginally better, but the borders are closing and Serbia is filling up with desperate Afghan refugees with no path forward or any way to return home.

After nearly two years of daily filming, Hassan tries to imagine a “happy ending” after which he can put his camera down. “I’m imagining Nargis and Zahara riding their bikes. We’ve arrived at our destination, we’re all at a park and we shoot the last scene of the film. And then the film can end. For us these dreams have become a mirage.” After sixteen months in Serbia, the family is admitted to Hungary to have their case heard, but the conditions in the Hungarian transit zone camp are prison-like. They cannot leave, and they look up at the world beyond the high barbed-wire that will be their only view for at least three months. Filming the sunset on the clouds above the fence, Nargis says, “I’m gonna forget. I absolutely won’t want to remember this in the future.”

In the midst of a personal and political crisis, filmmaking is a lifeline to the parents’ past as humanitarians and artists. Wandering with his sidekick and oldest daughter Nargis, Hassan explores the streets, visits makeshift migrant camps and even begins to question his faith in God. He follows the many journalists who come to their camp seeking sound bites and stories of suffering—meeting their camera’s gaze with the lens of his own videophone.

“Midnight Traveler illustrates the bravest type of filmmaking,” said Chris White, executive producer for POV. “Hassan, Fatima and their daughters’ commitment to sharing their struggles shows there is power in the act of documentation, reclaiming a narrative that, across Europe and the United States, has villainized everyday people like the Fazilis who are merely seeking refuge and safety.”

Hassan Fazili created theater, documentaries, short films, and several popular television serials in Afghanistan. In 2011, he was selected by the British Council to attend Sheffield/DocFest for documentary filmmaking networking and training. His films Mr. Fazili's Wife and Life Again! both push the envelope on issues of women's, children's and disability rights in Afghanistan, and have screened and won awards at numerous international festivals. He also worked as a Location Manager for Feo Aladag’s In Between Worlds, which premiered at Berlinale 2014, and as a Camera Operator for the IDFA selection Voice of A Nation: My Journey Through Afghanistan. His documentary Peace in Afghanistan, made for national television, profiled Taliban commander Mullah Tur Jan, who laid down arms in favor of a peaceful civilian life.

Emelie Mahdavian is a filmmaker and Fulbright scholar who focuses on Central Asian cinema. Her feature documentary After the Curtain, about the struggles of four women dancers in Tajikistan, premiered at Lincoln Center as part of the 44th Dance on Camera and continues to screen at festivals worldwide. Her experimental motion capture dance film Intangible Body, exploring censorship of women’s dance in Iran, is being exhibited at museums and international festivals. She was previously Director of the Davis Feminist Film Festival, Panels Coordinator for the Mill Valley Film Festival, and she has worked in film and television production for FX, Amazon, Columbia Pictures, HBO, CBS, and ABC. Emelie studied filmmaking at London Film School, Music and Philosophy at Mills College and New England Conservatory of Music, and has a Ph.D. in Performance Studies with an emphasis in Film Practice as Research from the University of California, Davis, where she also teaches Film Studies and Cinema and Digital Media.

Su Kim is a documentary producer in New York City. Her work has received numerous grants including from ITVS, Sundance Documentary Fund, NYSCA, California Humanities Council and Tribeca Film Institute. She was a 2015 Women at Sundance Fellow. Currently, she is producing ONE BULLET AFGHANISTAN with director Carol Dysinger, SANSON and ME with director Rodrigo Reyes, and MIDNIGHT TRAVELER with director Hassan Fazili and producer Emelie Mahdavian. Her recent film HALE COUNTY THIS MORNING, THIS EVENING with director RaMell Ross and producer Joslyn Barnes premiered at the 2018 Sundance Film Festival and won U.S. Documentary Special Jury Award for Creative Vision.

Produced by American Documentary, POV is the longest-running independent documentary showcase on American television. Since 1988 on PBS, POV has presented films that capture the full spectrum of the human experience, with a long commitment to centering women and people of color in front of, and behind, the camera. It's on POV where American television audiences were introduced to groundbreaking works like Tongues Untied, The Act of Killing and American Promise and innovative filmmakers including Jonathan Demme, Nanfu Wang, and Laura Poitras. In 2018, POV Shorts launched as one of the first PBS series dedicated to bold and timely short-form documentaries.