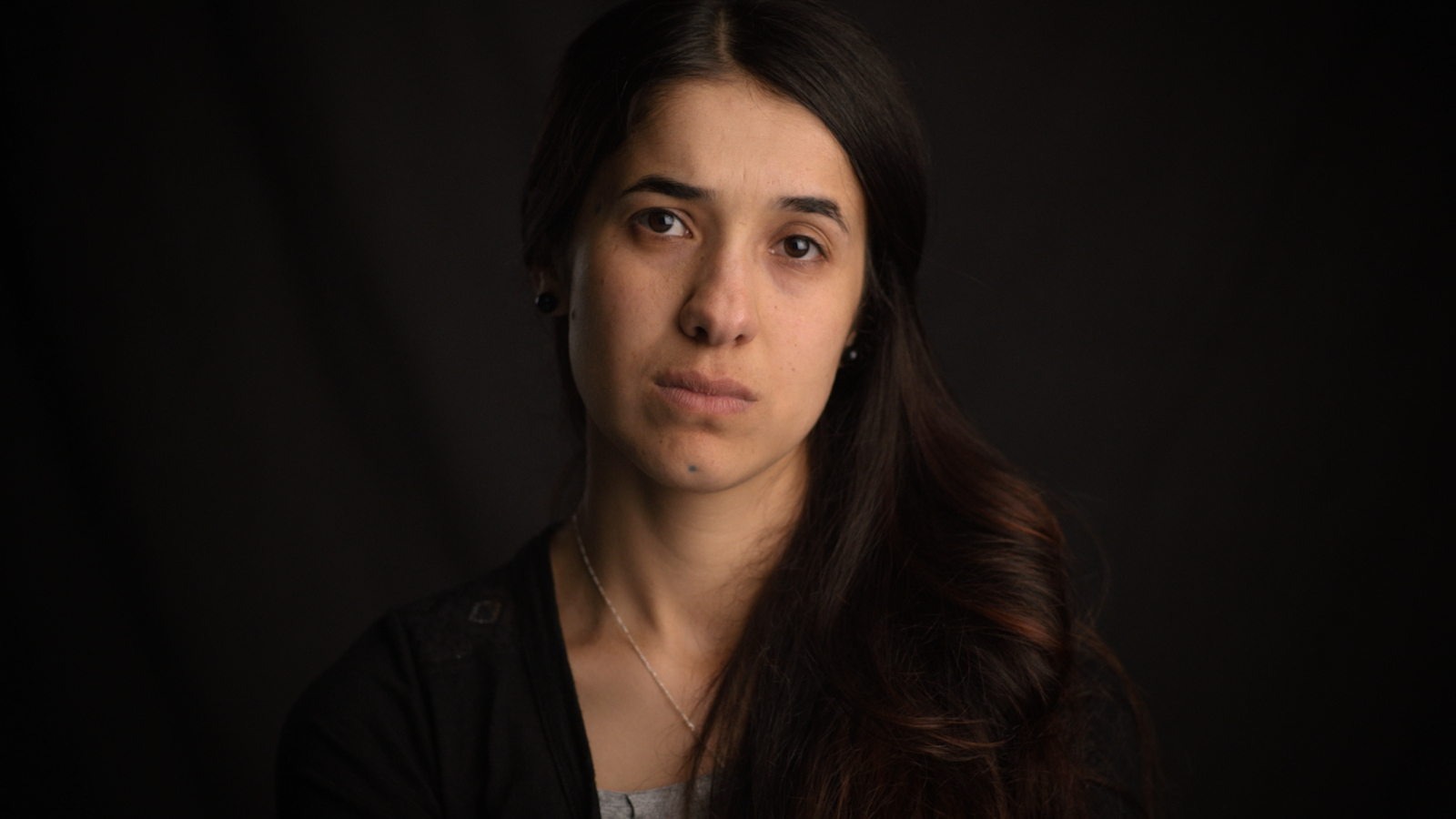 In the Pitfalls of Advocacy, A Portrait of One Survivor’s Resilience Under the Spotlight in ‘On Her Shoulders’ Premieres Monday, July 22, 2019.

Away from the podium, a Yazidi survivor must navigate bureaucracy, fame and people’s good intentions

After surviving the 2014 genocide of the Yazidis in Northern Iraq and escaping sexual slavery at the hands of ISIS, 23-year-old Nadia Murad gave a testimony before the U.N. Security Council that was heard around the world.

Directed by Alexandria Bombach, On Her Shoulders has its national broadcast debut on the PBS documentary series POV and pov.org on Monday, July 22 at 9 p.m. (check local listings). The film is a co-production of RYOT Films and American Documentary | POV. POV is American television’s longest-running independent documentary series now in its 32nd season. The film was an official selection at the 2018 Sundance Film Festival and the 2018 SXSW Film Festival and was shortlisted for Best Documentary Feature for the 91st Academy Awards.

Nadia suddenly became the face of the Yazidis – a historically persecuted and voiceless religious minority. Despite longing for a normal life away from the spotlight, Nadia takes on the role of an activist in hopes of halting the ongoing genocide and bringing ISIS commanders to justice. Repeatedly telling her harrowing story to journalists, politicians, and diplomats, this once ordinary girl is suddenly thrust into the alien world of advocacy on a global stage.

With intimate access into Nadia’s day-to-day existence and a behind-the-scenes look at the often absurd juxtapositions of international politics and aid, we follow Nadia during the peak of her advocacy campaign.

A moving study of the dizzying path Nadia’s life takes – from the refugee camps of Greece to soul-bearing media interviews, emotionally draining speeches in front of the U.N. and an endless succession of one-on-one meetings with top government officials – the film exposes the disparity between the toll the work takes on Nadia and her resolve.

Away from the podium and chaos, there are glimpses of Nadia as she once was – a strong-willed girl who dreamed of opening a beauty salon in her village. As this resilient young woman navigates bureaucracy, politics and the cost of fame, the film deftly reveals the immense obstacles facing a vulnerable minority struggling to be heard. With a formal precision and elegance that matches Nadia’s calm and steely demeanor, filmmaker Alexandria Bombach brings us inside an exhausting, destabilizing journey fraught with personal pain and profound ethical urgency.

“On Her Shoulders is a story in bravery, grace and will power,” said Justine Nagan, executive producer/executive director of POV/American Documentary. “It raises difficult questions about the toll it takes to bear witness and the cost to educate and empower the masses around trauma. Because of her efforts, Murad—at the age of 25—won the Nobel Peace Prize last year, and Bombach’s film is poignant testimony to Murad’s journey.”

When Nadia Murad walks into a meeting – whether with a politician, a journalist or a diplomat – there is a sense of tension. Understandably, it seems that for many it’s difficult to know what to say, what questions to ask, how to express that they care but at the same time not promise too much. They most likely know of her wrenching story before she starts, yet no matter how much detail she gives, they also know they couldn’t possibly, truly understand her experience.

This is a film that explores that space – the distance between the victim and her voice, the fragility of human emotions that both provoke and hinder positive change, and the unbelievable resilience of a woman willing to sacrifice herself to play the media game that is modern advocacy.

The past three years of Nadia’s life have been unimaginable. On August 3, 2014, ISIS declared that the Yazidi people of Northern Iraq had long been a shame to their idea of Islam, and set out to commit genocide. An estimated 5,000 people were killed in the weeks that followed, and over 7,000 women and children were captured to become sex slaves and child soldiers. Nadia was captured on the same day that ISIS killed her mother and six brothers. Eighteen members of her family were either killed or enslaved.

As she begins to tell her story, which I heard her recount over and over again, you might think that she would become used to it. But Nadia communicates the weight of her experience in her eyes. At the end of each and every meeting, through the business suits and flurry of handshakes, a long lens captures her sinking back into herself to recover – she is visibly drained.

I followed Nadia and the people working closest with her in the summer of 2016. From refugee camps in Greece to a memorial rally on the anniversary of the genocide in Berlin, to the House of Commons in Ottawa and the United Nations headquarters in New York, Nadia’s life is in constant motion. What I saw was an exhausting process, with no real roadmap for success. I started to see her lose faith in outlets that she had entrusted with her story. It seemed the incessant barrage of questions from the media turned to “How did they rape you” more often than “What can be done for the Yazidis?”

The platform of the victim, the survivor, is nothing to be taken lightly. Nadia herself knows that her words have moved people to take action. It is my hope that the intimate access into Nadia’s life off the podium will reveal the true struggles that a voiceless community faces in getting the world to act.

—Alexandria Bombach, Director, On Her Shoulders

Alexandria Bombach is an award-winning director, cinematographer, and editor from Santa Fe, New Mexico. Her recent work has focused on exploring ethics in journalism and advocacy, and challenging misperceptions of the refugee crisis. Her first feature-length documentary, Frame by Frame, follows the lives of four Afghan photojournalists who are facing the realities of building Afghanistan’s first free press. The film had its world premiere at SXSW 2015, went on to win more than 25 film festival awards and screened in front of the president of Afghanistan, Ashraf Ghani. Alexandria continued her work in Afghanistan in 2016 directing the Pulitzer Center-supported New York Times Op-Doc, Afghanistan by Choice, an intertwining portrait of five Afghans who must weigh the costs of leaving or staying as the country’s security deteriorates. Alexandria is the founder of the Santa Fe Editing & Writing Residency, a 2019 Sundance Institute Momentum Fellow, and a 2019 Chicken & Egg Award Fellow. She sits on the advisory board of the Santa Fe Independent Film Festival and is a commissioner on the Santa Fe Film Commission.

Hayley Pappas is the Head of RYOT Films, where she runs all content and creative strategy – overseeing industry partnerships, content development, packaging and distribution, and all ancillary marketing campaigns. With RYOT, Hayley has produced a slate of award-winning docs, including two Oscar-nominated shorts, Body Team 12 and Watani: My Homeland , as well as over a dozen virtual reality films with partners such as NPR and the Associated Press. She's sold work to partners ranging from HBO and MTV to Hulu and Apple. Her work has covered topics including sexual assault, solitary confinement and mass executions and has premiered at Sundance, Tribeca, SXSW, and Hot Docs among others.

Brock Williams is a Los Angeles based producer working in both narrative and documentary film, and an alumnus of the Film Independent Producing Lab. With strong ties to Missouri and Texas, he has produced narrative feature films in those states, including Box Elder (2008), Awful Nice (2013) and Slash (2016). His first feature documentary as creative producer was Killing Them Safely (2015), and he was a consulting producer on Alexandria Bombach’s first feature, Frame By Frame (2015). He also works as a documentary editor and photographer.