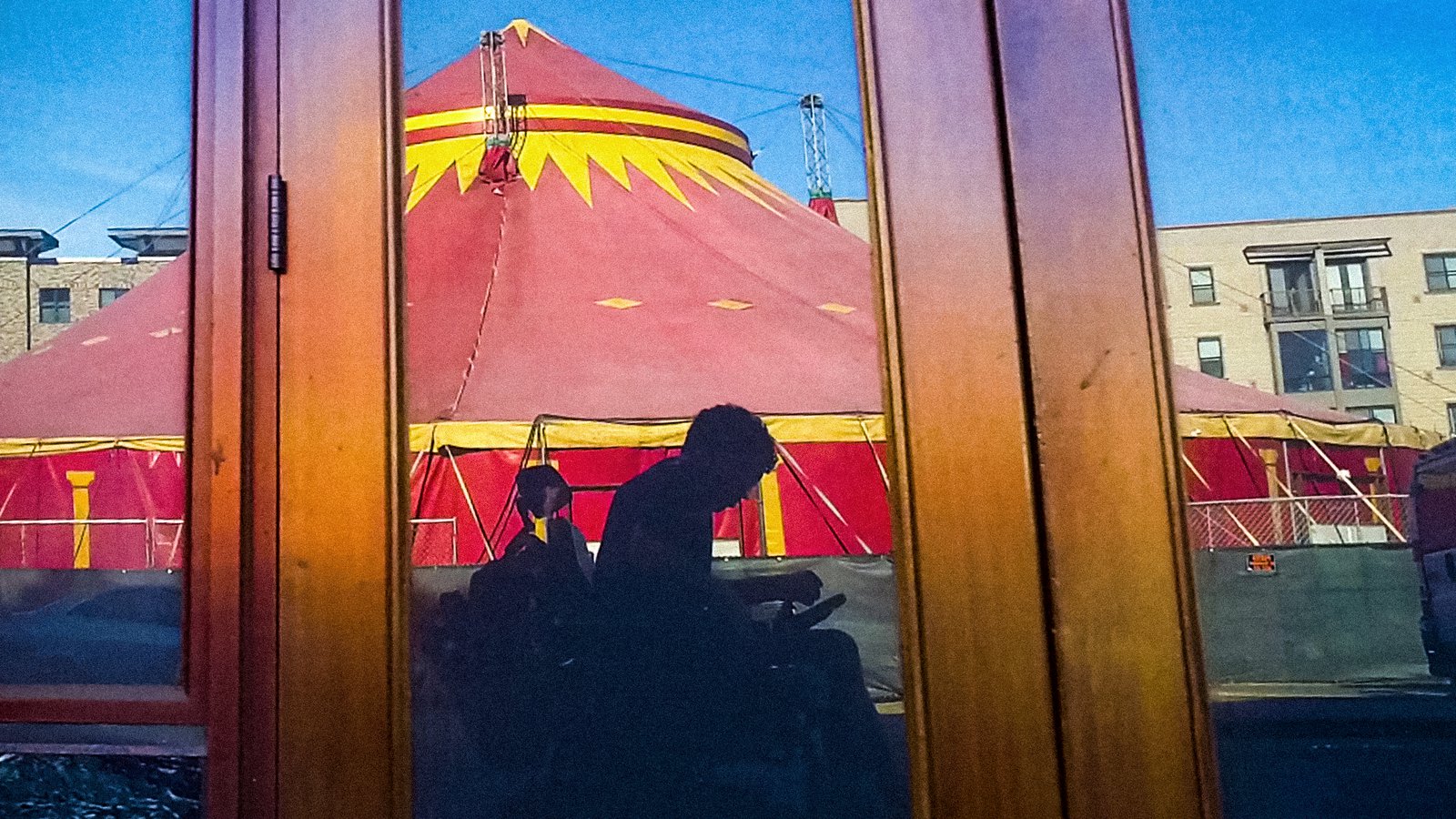 New York, N.Y. — November 17, 2022 — POV offers an intimate view of modern urban life, with its aggravations and unexpected moments of joy, from the point of view of first-time filmmaker Reid Davenport in the thoughtful documentary I Didn’t See You There, produced by Keith Wilson. Filmed from Davenport’s physical perspective—a camera mounted to his wheelchair or handheld without himself being seen, the film serves as a clear rebuke to the norm of disabled people being seen and not heard.

I Didn’t See You There, makes its national broadcast premiere on POV Monday, January 9, 2023 at 10pmET (check local listings) and will be available to stream with no PBS Passport membership necessary until February 9, 2023 at pbs.org, and thePBS Video app. Airing immediately after the premiere will be a short film by UCLA student Aaron Lemle, The Beautiful Colors of Jeremy Sicile Kira, which had its world premiere at the San Diego International ShortFest in 2021. The film follows artist Jeremy Sicile-Kira, who uses painting to transcend his disability and communicate his dreams to others.

When the unexpected arrival of a circus tent goes up outside of Davenport’s Oakland, CA apartment, he launches into a meditative journey exploring the history of freakdom, vision, and (in)visibility. As he confronts the legacy of the Freak Show and its lingering presence in his daily life in the form of gawking, lack of access and other forms of ableism, he ponders whether his past autobiographical filmmaking has fit into its tradition.

Informed by his position in space, lower to the ground, Davenport captures indelible images, often abstracted into shapes and patterns separate from their meaning. But the circus tent looms in the background, and is reverberated by tangible on-screen interruptions, from unsolicited offers of help to careless blocking of ramps. Personal and unflinching, I Didn't See You There forces the viewer to confront the spectacle and invisibility of disability.

“Reid Davenport’s I Didn't See You There takes us inside his life as a disabled person from an honest, sophisticated perspective that belies the fact that this is his first feature film. His captivating storytelling and unique cinematic style crystallize for viewers the toll of navigating daily life in an ableist world,” said Chris White, executive producer of POV.

“I shot this film from my literal perspective. As a disabled filmmaker, I first and foremost want to share that perspective with other disabled people in the hopes that it resonates. I also hope that non-disabled people find entry points into the film. There is no place better than POV for ensuring that I Didn’t See You There is seen by a wide audience,” said Reid Davenport, director and director of photography, I Didn’t See You There.

“POV is the absolute perfect place for I Didn’t See You There to reach so many viewers and start some needed conversations. It’s an incredible honor to follow in the footsteps of so many groundbreaking filmmakers whose POV films influenced me including Marlon Riggs, Laura Poitras, and Marshall Curry,” said Keith Wilson, producer, I Didn’t See You There.

“A debut feature that is deeply and sometimes opaquely personal.” –Variety

“More poetic than confrontational, I Didn’t See You There’smethods embody its purpose better than any synopsis. The doc hums with a hypnotic affinity for architectural patterns and urban textures, the visual infrastructure highly attractive to Davenport since it allows him to immerse us in his point of view without being the view himself.”

I Didn't See You There is a co-production of American Documentary | POV, in association with Breezy Circle, Ajna Films, and XTR. Reid Davenport is the director/director of photography, Keith Wilson is the producer and Todd Chandler is the editor. Alysa Nahmias, Bryn Mooser, Kathryn Everett, Andy Hsieh, Dawn Bonder, Marci Wiseman, Erika Dilday and Chris White are the executive producers.

Reid Davenport, Director/Director of Photography, I Didn't See You There
Reid Davenport makes documentaries about disability from an overtly political perspective. Reid’s first feature film, I Didn’t See You There, won the Directing Award for U.S. Documentary at the 2022 Sundance Film Festival. The film won the Grand Jury Prize at Full Frame Documentary Film Festival and the McBaine Bay Area Documentary Award at the San Francisco International Film Festival. It will have a national broadcast on POV in January. The film has been hailed by critics: Nick Allen of Roger Ebert described it as “first-person poetry in captivating motion, expressed with a singular, assured artistic voice.” Vox called it a “must-see.”

His film currently in production, Life After, is being produced by Multitude Films and has been supported by Field of Vision and Catapult Film Fund. It was a selection for the 2022 Hot Docs Pitch Forum and will be released in early 2024. In 2020, Reid was named to DOC NYC’s “40 Filmmakers Under 40.” His short film, A Cerebral Game, won the Artistic Vision Award at the 2016 Big Sky Documentary Film Festival for “creating a visual landscape that is at once disorienting and nostalgic - and the result is so raw and compelling it’s impossible to turn away.” Along with A Cerebral Game, his short documentaries Wheelchair Diaries andRAMPED UP are distributed by New Day Films. Reid’s work has been supported by The Ford Foundation, Sundance Institute, Creative Capital, XTR, ITVS, NBCUniversal, CNN and the Points North Institute, among others.

Reid was a 2017 TED Fellow and gave a TED Talk about incorporating his own literal body into his filmmaking. His work has been featured by outlets like NPR, PBS, The Washington Post, MSNBC, and The Chronicle of Higher Education. Davenport received a Master of Fine Arts in Documentary Film & Video from Stanford University in 2016, and a Bachelor of Arts in Journalism and Mass Communication from The George Washington University in 2012.

Keith Wilson, Producer, I Didn't See You There
Keith Wilson is a producer, director and artist based in Athens, Georgia whose films have screened at the Sundance Film Festival, the Berlinale, Hot Docs, the U.S. National Gallery of Art, documenta14, and the Museum of Modern Art. He is a 2021 Creative Producing Fellow with the Sundance Institute for I Didn’t See You There.

Wilson’s recent short filmThe Tree screened at MoMA's Doc Fortnight program, DOC NYC, and was exhibited as a storefront installation at Artist Television Access in San Francisco. In January 2023, he will co-curate (with artist Vincent Fecteau) an exhibition of paintings by the late performance artist Frank Moore, who Wilson is making a live documentary piece supported by a BAVC National Mediamaker Fellowship and a Points North Institute Fellowship. He was the producer, director of photography and editor of Water Makes Us Wet, a documentary feature directed by Annie Sprinkle and Beth Stephens that premiered at documenta14 in Kassel, Germany. Wilson was Director of Photography and Producer for INTERIOR. LEATHER BAR., which premiered at Sundance and was released theatrically by Strand Releasing. Wilson is a member-ownerof New Day Films, a 40 year-old documentary distribution cooperative.

Wilson currently teaches in the Entertainment & Media Studies Department at the University of Georgia, has an MFA in film production from the Radio-TV-Film Department at UT-Austin, and grew up on a cul-de-sac in suburban Atlanta.