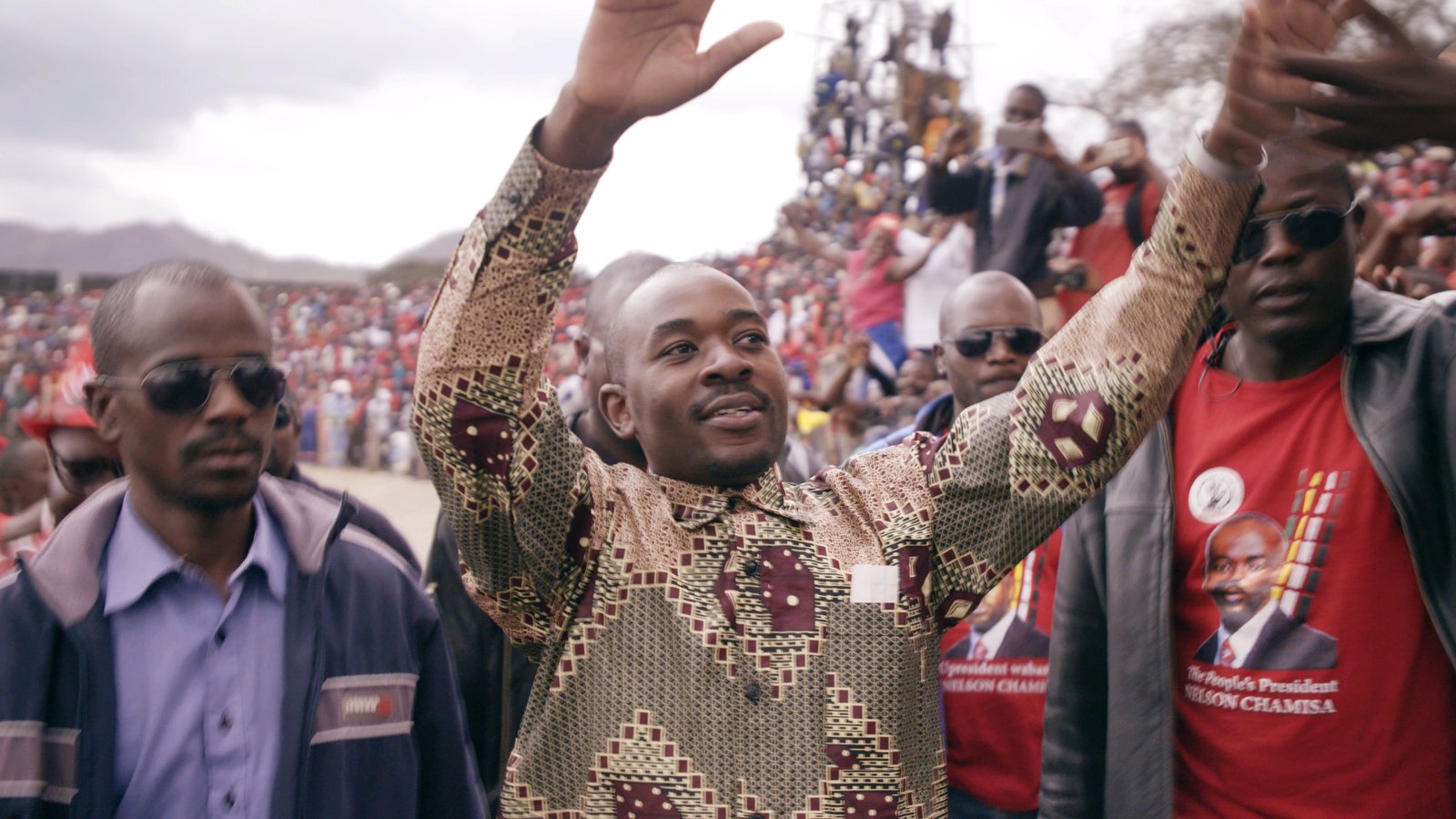 New York, NY –June 27, 2022 – POV, America’s longest running documentary series, currently celebrating its 35th anniversary season, follows the erratic 2018 presidential election in Zimbabwe – the country’s first election since its independence in 1980 without Robert Mugabe on the ballot – as it serves as the ultimate test for both the ruling party and for the opposition in the discerning documentary President. President makes its national broadcast premiere on POV on Monday, August 8, 2022 (check local listings) and is available to stream free until September 8, 2022 atpbs.org, and thePBS Video app. In addition to standard closed captioning for the film, POV, in partnership with audio description serviceDiCapta, provides real time audio interpretations for audiences with sensory disabilities.

Directed by Camilla Nielsson (Democrats, Mumbai Disconnected), produced by Academy Award® nominee Signe Byrge Sørensen (The Act of Killing, The Look of Silence, Flee) for Final Cut for Real and Academy Award® nominated and Emmy® Award winner Joslyn Barnes (Trouble the Water, Strong Island, Hale County This Morning This Evening) for Louverture Films, and executive produced by Danny Glover, Thandiwe Newton, Susan Rockefeller and Tone Grøttjord-Glenne, the film questions how Zimbabwe will interpret democracy in a post-Mugabe-era – in discourse and in practice.

Zimbabwe is at a crossroads. After years of oppression under the Zimbabwe African National Union-Patriotic Front (ZANU-PF) regime, president Robert Mugabe is forcibly ousted from power in the military coup of November 2017. When Mugabe was removed from power, Zimbabwean military leaders promised they would not seize control for themselves, but rather ensure democracy in a national general election. In the context of an economic crisis, food shortages and political violence, the stakes could not be higher.

Nelson Chamisa, the new young and charismatic leader of Zimbabwe's opposition party, Movement for Democratic Change (MDC) Alliance is challenging the old guard ZANU-PF represented by the acting president, Emmerson Mnangagwa, who is determined to remain in power. Chamisa, is a 40-year-old lawyer who fought against President Mugabe’s regime while he was a student activist. The more popular candidate, Chamisa draws enormous crowds while Mnangagwa is unable to fill a stadium after bussing in alleged supporters. When the election results come in, it is no surprise when Mnangagwa insists that he won, despite that the numbers never add up in his favor. When asked how sixteen counties could’ve possibly reported identical election results, the ZANU-PF’s lawyer argues that only a behavioral scientist could account for how such an amazing coincidence could occur.

Can a free, fair and transparent election that reflects the will of the people proceed? President offers riveting witness and an epic reminder that democracy won't happen if the people don't fight to create it. The film is of staggering global relevance to all who envision a more just, egalitarian future.

“I am thrilled that President will be broadcast as part of the POV series on PBS, and thereby reach a very wide and engaged audience across the U.S. I hope the film will prove inspiring for everyone concerned with participatory democracy and the critical elements that make it possible – such as a free and independent press; an independent judiciary; freedom of speech, association and assembly; a multi-party system; a system of checks and balances; rule of law; and transparency in governance. As we see democracies under threat everywhere, I am in awe of the courage of Zimbabweans to champion their freedom,” said director Camilla Nielsson.

“The political situation in Zimbabwe has been intense for years,” said Erika Dilday, POV executive producer and executive director of American Documentary. “President became especially intriguing given our own country’s struggles fighting against voter suppression and other attacks on democracy. This film takes a fascinating look inside the political machine and grassroots organizing and we are honored to have it as part of our historic 35th season.”

President won the World Cinema Documentary Special Jury Award: Verité Filmmaking at the 2021 Sundance Film Festival and was Shortlisted as a Feature Documentary for the 94th Academy Awards®.

Nelson Chamisa is a Zimbabweanpolitician and the current President of the Citizens Coalition For Change. He served as Member of the House of Assembly of Zimbabwe for Kuwadzana East, Harare. Chamisa was the Movement for Democratic Change (MDC) Alliance's candidate for president in the 2018 general election, having previously been the leader of the party's youth assembly. He has served as the former chairperson of national youth for the same party as well as the Secretary for Information and Publicity. In 2003, at the age of 25, Chamisa became the youngest Member of Parliament. In 2009, he was also the youngest cabinet minister in the Government of National Unity of Zimbabwe.

Nkululeko Mkastos Sibanda began challenging authority in high school and while in college was elected a member of the Student Representative Council, rising through the ranks until he became president of the National Union of Students in Polytechnic and Technical Colleges (NUSPOTECH). In December 2000 he was elected President of the Zimbabwe National Students Union (ZINASU) and served until 2003. He continuously challenged the government on the privatization of education and the lack of basic human rights in the country.

​​Camilla Nielsson was a Fulbright Scholar at Tisch School of the Arts, New York University (NYU), and in the Dept. of Anthropology (NYU), where she studied documentary filmmaking and visual anthropology from 1997-2000. She has directed the documentary short trilogy Good Morning Afghanistan (2003), Durga (2004), and The Children of Darfur (2005), about children’s rights, and Mumbai Disconnected (2009), in the Cities on Speed series. Nielsson’s first feature documentary Democrats (2014), has screened at more than 80 film festivals, and won 20 awards and nominations, including Best Documentary at Tribeca Film Festival 2015, and Best Documentary at Nordic Panorama 2015.

Signe Byrge Sørensen is a three-time Oscar® nominee for producing The Act of Killing (2012, The Look of Silence (2014) and Flee (2021). She was nominated for the Producers Guild Award in 2016 for The Look of Silence and 2021 for Flee, and won or was nominated for Cinema Eye Awards for the production of all these films. She has been a producer since 1998 and founded Final Cut for Real ApS in 2009. Other recent titles include The Killing of a Journalist (2022) by Matt Sarnecki, Our Memory Belongs to Us (2020) by Rami Farah, and Songs of Repression by Marianne Hougen-Moraga and Estephan Wagner (2020). She holds an MA in International Development Studies and Communication Studies from Roskilde University, Denmark and attended EURODOC in 2003, EAVE in 2010 and ACE in 2018. In 2014, Sørensen received the Roos Award, given for an extraordinary contribution to Danish documentary film. She has co-produced four documentary films with Joslyn Barnes of Louverture Films: Angels Are Made of Light by James Longley, That Summer by Göran Olsson, Strong Island by Yance Ford (Oscar® nominated 2018) and Shadow World by Johan Grimonprez.

Joslyn Barnes is a producer, writer and co-founder of New York based Louverture Films together with Danny Glover and partners Susan Rockefeller, Tony Tabatznik for the Bertha Foundation, Sawsan Asfari, Jeff Clark, and Karin Chien. Among the films she has been involved with producing are the features: Bamako by Abderrahmane Sissako; Apichatpong Weerasethakul's Uncle Boonmee Who Can Recall His Past Lives, Cemetery Of Splendour and Memoria; Deepak Rauniyar's White Sun; Lucrecia Martel's Zama; Nadine Labaki’s Capernaum; Noche De Fuego by Tatiana Huezo and EAMI by Paz Encina. Among the documentaries are: Tia Lessin and Carl Deal’s Trouble The Water; Göran Hugo Olsson’s Black Power Mixtape 1967-1975, Concerning Violence and That Summer; Eugene Jarecki’s The House I Live In; Tala Hadid’s House In The Fields and the forthcoming Forest Of Stone; Yance Ford's Strong Island; Ramell Ross's Hale County This Morning, This Evening and Easter Snap; Victor Kossakovsky's Aquarela and Gunda; Camilla Nielsson's President; and Lucrecia Martel’s forth-coming Chocobar. In 2017, Barnes was the recipient of both the Cinereach Producer Award and the Sundance Institute | Amazon Studios Producer Award. In 2010, 2018 and 2019 she was nominated for Emmy Awards, and won in 2018 for Exceptional Merit in Documentary Filmmaking. In 2018 and 2019 she earned Oscar® Nominations for best Documentary Feature.