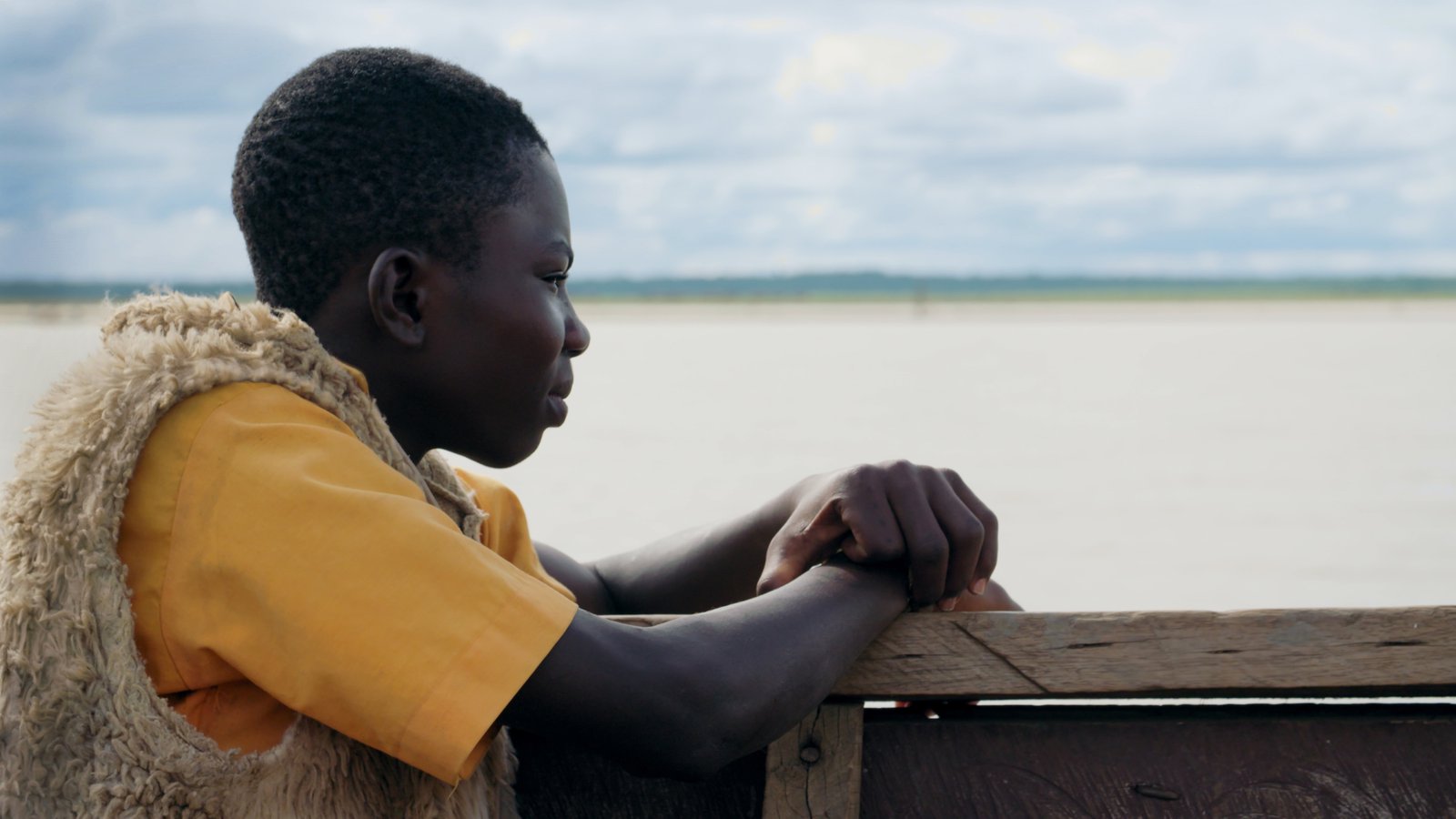 Rescued from Slavery, Two Children Help Save Others in ‘The Rescue List,’ premiering Monday, March 23, 2020

In a hidden safehouse in the Ghanaian forest, social workers help two children recover from a childhood enslaved to fishermen on Lake Volta, the largest manmade lake on Earth. But their story takes an unexpected turn when their rescuer embarks on another rescue mission and asks the children for help.

Directed by Alyssa Fedele and Zachary Fink, The Rescue List has its national broadcast debut on the PBS documentary series POV and pov.org on Monday, March 23, 2020 at 10 p.m. (check local listings). The film is a co-production of Collective Hunch and American Documentary | POV. POV is American television’s longest-running independent documentary series now in its 32nd season.

Haunted by the memory of his friend who disappeared on the lake, twelve year old Edem is reluctant to talk about his experience. Despite being rescued from slavery months earlier, Edem is overcome with grief. Social workers believe that Edem’s shyness and lack of focus in school are signs that he is wrestling deeply with the disappearance of his friend. As they coax him to reveal the truth of his friend’s fate, they also search for a way for Edem to come to terms with this trauma in order to heal and move forward—which he must do in order to be reunited with his mother.

Meanwhile, Peter, 17, is burdened by a sense of responsibility to help find his best friend, who is still enslaved to their master on the lake. “I want the rescuers to go back and bring him here,” Peter says.

When Kwame, their rescuer, announces that his team is setting off on another rescue mission and needs the children’s help, Peter seizes the opportunity, setting in motion a journey that will change the boys’ lives forever. Kwame is part of a local team dedicated to rescuing and rehabilitating children who have been trafficked and enslaved to fishermen on Lake Volta. As the story progresses from rescue operation to rehabilitation shelter, he reveals his deeply personal connection to this work.

Intimately following Kwame, Peter, and Edem as they work to recover from their trauma, The Rescue List provides these protagonists with a forum to tell their own stories through their words and actions, allowing universally resonant themes to emerge. Filmmakers Fedele and Fink, guided by their backgrounds in anthropology and commitment to collaboration with their subjects, spent many months in the field building relationships with the rescue team, social workers and the children. “We chose to viscerally portray the under-represented personal experience of slavery through our protagonists’ day-to-day lives, rather than through the reductive lens of an issue-based advocacy film, which tends to focus solely on victimhood,” said Fedele and Fink.

“The Rescue List is an intimate perspective on trauma and the lived experiences of slavery and what it means to recover,” said Chris White, executive producer for POV. “In the stories of Kwame, Peter, and Edem we find not only a journey of healing, but profound resilience and friendship that transcends victimhood.”

Several years ago, we met a Ghanaian man who told us his story of being trafficked into modern slavery as a child. He described enduring six years enslaved to fishermen who forced him to work on fishing boats on Lake Volta in Ghana. Eventually, he managed to escape, return home, and start kindergarten at age 13. As an adult, he assembled a courageous grassroots team to rescue and reunite trafficked children with their families.

His story shocked us and the statistics staggered us. Today, there are more than 45 million people enslaved worldwide, including over 18,000 children enslaved on Lake Volta alone. Despite its prevalence, human trafficking and modern slavery remain a hidden issue. Traffickers operate in the shadows of society, preying on economically and socially disadvantaged populations around the world. In part, it is the invisibility of modern slavery that allows it to persist.

As our relationship with the rescue team developed, we felt that we had a unique opportunity to shine a light on this issue through their work.

From the beginning, we wanted to empower the children in our film by telling the story from their perspectives, but it was of critical importance to us that their recoveries be paramount. We decided to make the film observationally. Our film intimately follows Peter and Edem as they work to recover from their trauma, viscerally portraying our protagonists’ day-to-day lives in recovery, rather than focusing on their past. By bearing witness to their daily lives, we sought to provide the children with a forum to tell their own stories through their words and actions. We found that this process of following the action, and telling the story through slow disclosure, conveyed the children’s gaps in memory and knowledge of what happened to them, while also revealing the steadfast friendships that enabled them to survive - something we had not expected. Through this observational process of discovery, authentic themes emerged: friendship, belonging, and survival. These themes are human universals that we all identify with and experience. We believe that character-driven stories like these humanize issues of global importance, moving audiences through the power of this universal connection.

Our observational approach is guided by our backgrounds in ethnographic filmmaking and our commitment to cross-cultural understanding. As outsiders to this community, we endeavored to understand the complexity of this human rights issue from a culturally relative point of view and to reflect that in the film. It was not our intention to villainize anyone, but rather to reveal the circumstances that create an environment in which children are exploited. We worked as a small three person team, embedded in the community, and immersed in our participants’ daily lives. Collaboration, reciprocity, and trust lay at the heart of our process. This allowed us to build strong relationships with our participants and create a film grounded in respect and understanding. By taking this approach, we witnessed a moving story of friendship, courage, and belonging that transcends the trope of victimhood, and shows us what it truly means to love and survive. We hope that audiences connect with the individuals in our film on a personal level, and come away with a better understanding of the complexity of trafficking, as well as a sense of hope for the future.

Alyssa Fedele is a documentary filmmaker and anthropologist based in San Francisco. Alyssa directed, produced and edited The Rescue List (2018), which screened at Full Frame and DOC NYC and won awards at BendFilm and Heartland International Film Festival. In 2016, She produced and edited The Ride of Their Lives, directed by Steve James, about youth rodeo bull riding. It premiered at Sundance and is distributed by Amazon Studios in the series The New Yorker Presents. Her work has appeared on National Geographic Channel, ARTE, and PBS, and screened at IDFA, SFFILM and Big Sky Film Festival. Alyssa has a master's degree in visual anthropology from the University of Manchester.

Zachary Fink is a documentary filmmaker and cinematographer. His immersive observational approach to storytelling is deeply influenced by his academic roots in cultural anthropology and visual ethnography. He recently lensed Rob Epstein and Jeffrey Friedman’s SXSW opening night premiere, State Of Pride, which takes an unflinching look at the diverse expression of Pride 50 years after Stonewall. Last year, he spent a month at McMurdo Station in Antarctica where he field-directed and shot Antarctic Extremes, a PBS NOVA series about how science is conducted on the harshest continent. In 2016, Zachary produced and filmed The Ride Of Their Lives, a short directed by Steve James about youth rodeo bull riding. It premiered at Sundance as part of the Amazon Studios series, The New Yorker Presents. His work has appeared on PBS, HBO, National Geographic Channel and Discovery Channel. Zachary has a master’s degree in cultural anthropology and an MFA in film production from California Institute of the Arts. Together with Alyssa Fedele, he runs the production company Collective Hunch.

Davis Coombe is an award winning editor, producer, and writer. His two most recent films, Casting JonBenet and Chasing Coral premiered at Sundance in 2017, where Chasing Coral won the audience award for best documentary. Both films were acquired by NETFLIX. Davis produced and edited Saving Face, which won the Oscar for Best Short Documentary in 2012. He also edited Chasing Ice, which premiered at Sundance in 2012 and was shortlisted for an Academy award. He co-produced, co-wrote, and edited Being Evel, which premiered at Sundance and broadcast on History Channel. Davis co-wrote and edited Keep On Keepin’ On and Beyond the Brick: A Lego Brickumentary, both films premiered at the 2014 Tribeca Film Festival. In 2013 he won two national Emmys for Editing and Best Documentary at the News and Documentary Emmys. In 2009 he shot, edited and produced The Last Campaign of Governor Booth Gardner which was nominated for an Academy Award and broadcast on HBO. Coombe also edited Iron Ladies of Liberia (Toronto Film Festival 2007, Winner AFI-Dallas, Independent Lens, BBC), They Killed Sister Dorothy (Winner Audience Award and Grand Jury Prize at SXSW 2008, HBO, shortlisted for an Academy Award).

Produced by American Documentary, POV is the longest-running independent documentary showcase on American television. Since 1988 on PBS, POV has presented films that capture the full spectrum of the human experience, with a long commitment to centering women and people of color in front of and behind, the camera. It's on POV where American television audiences were introduced to groundbreaking works like Tongues Untied, The Act of Killing and American Promise and innovative filmmakers including Jonathan Demme, Nanfu Wang and Laura Poitras. In 2018, POV Shorts launched as one of the first PBS series dedicated to bold and timely short-form documentaries.