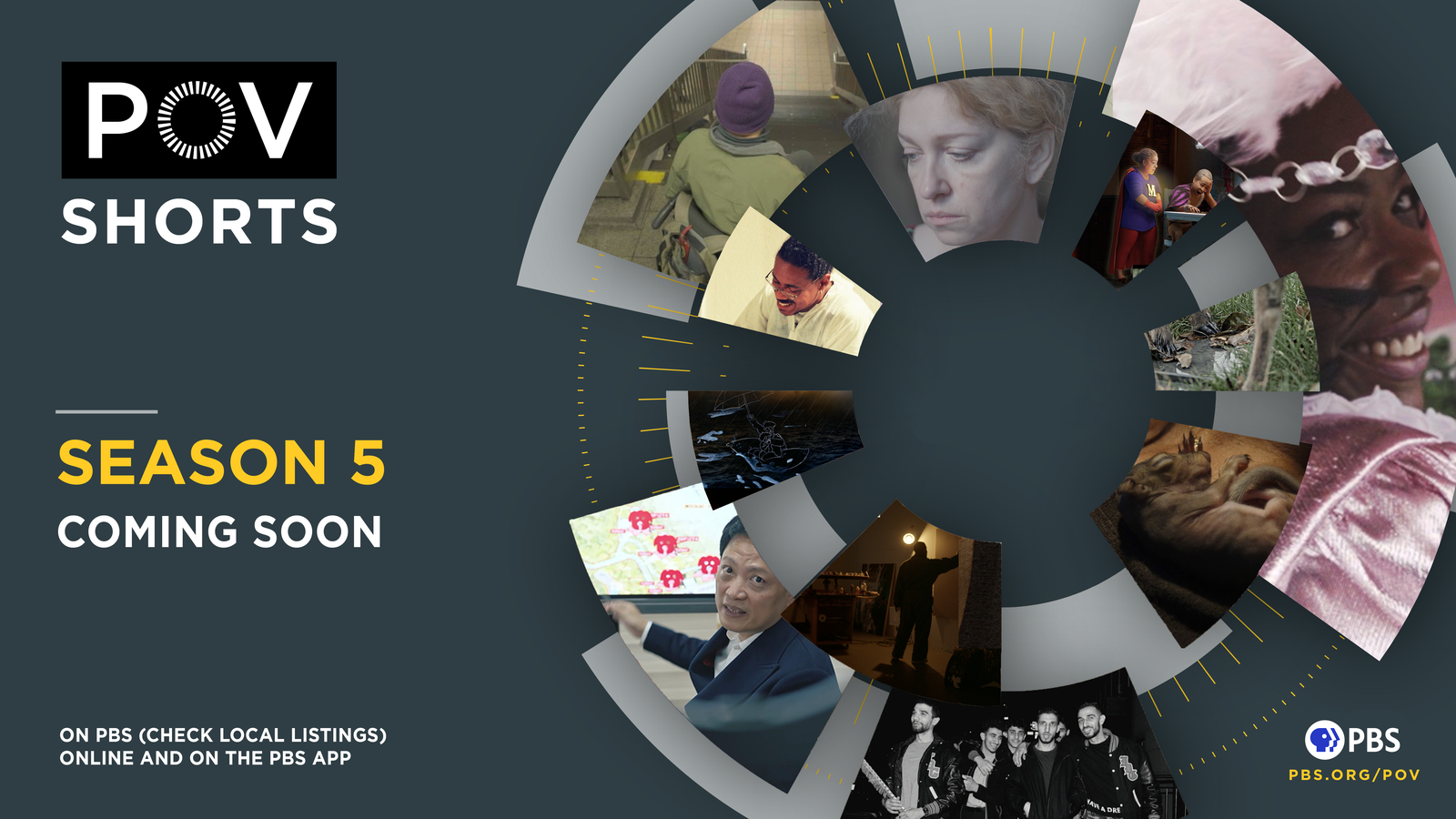 UPDATE, November 14, 2022: Please note that there has been a change to the POV Shorts Season 5 schedule. Episodes 2-6 will now be released all on one day, Monday, February 13, 2023. See schedule lineup for more details.

New York, N.Y. –September 27, 2022 – POV Shorts, the award-winning non-fiction shorts film series curated by POV, celebrates its fifth year anniversary with 11 new bold and dynamic documentaries. The landmark season highlights art as activism, freedom of expression, Americans with disabilities, intergenerational stories, and connectedness, by independent storytellers. Nearly two-thirds of the season’s films are directed by filmmakers of color and over 80% are by women.

POV Shorts new season includes the world premiere of the student film, Call Me Anytime, I’m Not Leaving the House, directed by Sanjna Selva, about two Ukrainian sisters separated by distance and war; plus two co-releases with The New York Times Op-Docs, My Duduś, directed by Tom Krawczyk, follows a Polish mother with empty nest syndrome as she raises a baby squirrel; and Happiness is £4 Million, directed by Weixi Chen and Kai Wei about an idealistic young journalist in Beijing who profiles China's biggest real estate speculator.

Other notable films include Chilly and Milly an animated documentary short about the filmmaker's caretaker of a mother, her chronically ill husband, and the power of undying love, is a co-release with Latino Public Broadcasting and recent winner of the juried prize at this year’s PBS Shorts Film Festival.and Freedom Swimmer directed by Olivia Martin-McGuire and winner of the MOZAIK Bridging the Borders Award at the 2022 Palm Springs International ShortFest, telling the story of a grandfather’s perilous swim from China to Hong Kong that parallels a new generation's quest for freedom. Coming Home, directed by Naim Naif and Margot Bowman, is an intimate portrait of a Brooklyn-based Palestinian-American dance troupe who use traditional Dabka to connect with their community and their homeland; You Can’t Stop Spirit, directed by Vashni Korin, about Black women creating a space for freedom through the Baby Doll Mardi Gras masking tradition, won the 2021 Reel South Award and Best Documentary Short at the 2021 Indie Memphis Film Festival; and All Riders, a 2021 DOC NYC selection, directed by Victor Dias Rodrigues, takes a close look at New Yorkers fighting for MTA accessibility.

“As the fifth season of POV Shorts marks a notable milestone, the series is well-represented by these outstanding stories and filmmakers,” said Opal H. Bennett, co-producer for POV. “This is an eclectic group of episodes, some performance-forward, some animated, one focused on POV’s hometown–New York City–and all conveying the unique world view of each filmmaker. We are so excited to bring these films to PBS audiences.”

POV Shorts launched in 2018 as one of the first PBS series dedicated to bold and timely short-form documentaries. POV Shorts has almost 40 titles in its catalog. In addition, the strand works with major short-form digital distributors such as Field of Vision and has worked with others including The New York Times Op-Docs and Condé Nast. POV Shorts have screened at the Sundance, SXSW, Tribeca, Hot Docs, DOC NYC, Palms Springs International ShortFest, True/False film festivals, among others.

The series is known for its curation and for broadcasting award-winning titles, including: the recent News & Documentary Emmy nominated, Oscar® shortlisted, and IDA Awards winner, A Broken House; A Night at the Garden, which received an Academy Award nomination; Emmy® nominated Earthrise, Water Warriors, The Changing Same; Emmy® winner The Love Bugs and Oscar® shortlisted Àguilas. The series won Best Short Form Series at the IDA Documentary Awards in 2020 and was nominated in 2019 and 2021.

EPISODE 1: Shut Up and Paint – An artist’s canvas becomes an embattled space.

Two Ukrainian sisters – one recently emigrated to Brooklyn, the other in war-besieged Odessa – long to be reunited and reminisce about their homeland.

EPISODE 3: Take the A Train – Two stories from the heart of New York.

Are You Down?, Directors/Producers: Juan Matos, Dennis Scholl

The subway makes New York City tick, but getting around is a constant battle for disabled New Yorkers. 2021 Palm Springs International ShortFest. 2021 DOCNYC.

EPISODE 4: Happiness is £4 Million – A modern contemplation on the generational divide.

EPISODE 5: You Are My Sunshine – Three stories about care and connection.

A Polish mother grieves when her only child leaves their home in the suburbs of Chicago to study in Poland. While her son is away, she finds a baby squirrel in her backyard and forges a unique and powerful bond with the animal, raising him as if he were her own child. 2022 SXSW Film Festival. 2022 San Francisco International Film Festival. Audience Award, 2022 Chicago Critics Film Festival.

Director Toby Bull tries to find greater meaning from the sheep living on the land where his parents were buried several years ago. The film is an original perspective on bereavement, tackled with humor and tenderness. 2022 Palm Springs International ShortFest.

Eleven years after filming a documentary about his family, director William D. Caballero returns home to revisit scenes with his parents in the animated short, Chilly and Milly. Chilly, William’s father, is a diabetic with kidney failure while Milly sees herself as a caretaker. Watching the documentary, Chilly and Milly discuss their life together, including their successes and setbacks. A co-release with Latino Public Broadcasting. 2022 Palm Springs International ShortFest Selection. 2022 Sundance Film Festival. Best Documentary Short, 2022 Atlanta Film Festival. 2022 PBS Short Film Festival Selection.

About POV and POV Shorts
Produced by American Documentary, POV is the longest-running independent documentary showcase on American television. Since 1988, POV has presented films on PBS that capture the full spectrum of the human experience, with a long commitment to centering women and people of color in front of, and behind, the camera. The series is known for introducing generations of viewers to groundbreaking works like Tongues Untied, American Promise and Minding The Gap and innovative filmmakers including Jonathan Demme, Laura Poitras and Nanfu Wang. In 2018, POV Shorts launched as one of the first PBS series dedicated to bold and timely short-form documentaries.