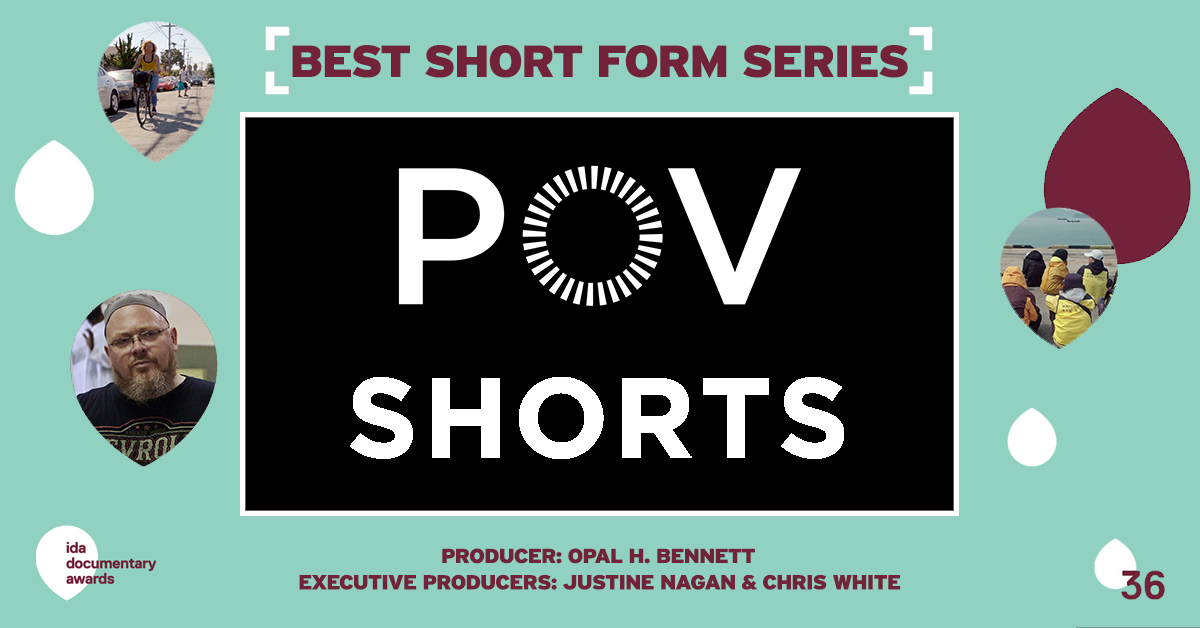 New York, N.Y. -- January 16, 2021 -- POV Shorts, American Documentary’s newest program, has won the Best Short Form Series award at the 36th Annual IDA Documentary Awards, which recognize the best nonfiction films and programs of the year. The IDA announced the winners at a virtual ceremony on Saturday, January 16, 2021. Now in its third season on PBS, this is POV Shorts’ second nomination in the category and first-ever win. Along with POV Season 33 feature Softie, which received a Best Feature nomination, POV Shorts continues American Documentary | POV’s success at the IDA Awards: the organization now has five curated series wins since 2009.

Premiering on July 20, 2020, POV Shorts Season 3 includes critically-acclaimed films from all around the world, including the 2019 Oscar® Nominee, In The Absence, which chronicles the 2014 sinking of the MV Sewol passenger ferry in South Korea; Now is the Time, a film that revisits the 1969 woodcarving of the first new totem pole in British Columbia’s Haida Gwaii in almost a century; The Love Bugs, a 60-year love story between two octogenarian entomologists in Arizona; and All Cats Are Grey in the Dark, about an Austrian man who goes to great lengths for his two beloved cats. Now is the Time, The Love Bugs, and All Cats are Grey in the Dark are on several critics’ list as award season contenders.

"This season was curated with the aim to highlight stories of unexpected connections through films which bear the hallmark of POV selects — bold filmmaking that engages and inspires. The IDA is a beacon in the non-fiction landscape and we are thrilled to have the brilliant work of the 18 filmmakers behind these films bestowed with this honor," said POV Shorts Producer, Opal H. Bennett.

Launched in 2018, POV Shorts sources films through a variety of channels, particularly its open call for entries page (cfe.pov.org). In addition, the series works with major short-form digital distributors such as The New York Times Op-Docs, Condé Nast Entertainment / The New Yorker, and Field of Vision.

Produced by American Documentary, POV Shorts was launched in 2018 as one of the first PBS series dedicated to bold and timely short-form documentaries. The program offers short form filmmakers a trusted broadcast and streaming, public venue to showcase their work to audiences. Additionally it is a great opportunity to welcome emerging and up-and-coming filmmakers into the POV family. POV Shorts is a sister project to POV, the longest-running independent documentary showcase on American television. Since 1988, POV has presented films on PBS that capture the full spectrum of the human experience, with a long commitment to centering women and people of color in front of, and behind, the camera.

POV Short films have been honored with numerous awards and nominations including from The News & Documentary Emmys, The Academy Awards and The International Documentary Association Awards. Learn more at pbs.org/pov and follow @povdocs on Twitter, Instagram, and Facebook.