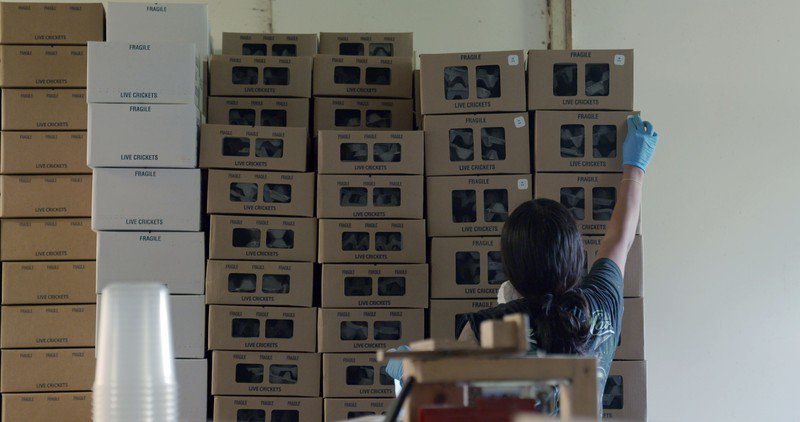 New York, N.Y, September 17, 2021 – POV Shorts, the award-winning nonfiction film series on PBS, announced today that it has acquired the broadcast and streaming rights for Bug Farm, directed by Lydia Cornett, and Share, directed by Barna Szász and Ellie Wen. The two short films will broadcast after the feature length films Fruits of Labor on October 4, 2021 and Things We Dare Not Do on October 25, 2021, respectively. Following broadcast, the films will be available to stream on POV.org and the PBS app.

Bug Farm, which first showed on PBS’ Reel South Series, takes place in the small Central Floridian town of Labelle where four women work on an insect farm. Their reasons for being on the farm vary: for some it is economics-driven, providing a means to support themselves and their families. For others, it’s about working on the frontlines of changes in agricultural and food consumption; one of the film’s participants is there simply because she loves taking care of the bugs. Examining the bonds forged at the farm, whether personal or cross-species, Cornett’s film is a fascinating and insightful glimpse into the different ways of finding connection and meaning at the workplace. Bug Farm has screened at the Nashville Film Festival, the New Orleans Film Festival, Palm Springs International Shortfest 2021 and AFI Docs, among others.

Share, which was released by The Guardian in 2019, is a coming-of-age film for the digital generation, following an 18-year-old Instagram influencer as they navigate their online and offline lives. Running an immensely popular social media account and working at a start-up, Tim Chau also spends their time promoting mental health resources, while personally contending with the difficulties of coming out to their parents. As Tim contemplates revealing their identity to their family, they find friendship and support online through a community that accepts them wholeheartedly. Prior to its online release, Share screened at DOC NYC, Outfest LA, Big Sky Film Festival and won the InspirASIAN Student Film Award at CAAMFest; the film was also named a Vimeo Staff Pick.

“I’ve followed these filmmakers’ work for many years and am so excited to add their brilliant stories to this season’s line-up. Bug Farm and Share both present unique characters and timely issues with the kind of artistry that’s a hallmark of POV films.”

Produced by American Documentary, POV is the longest-running independent documentary showcase on American television. Since 1988, POV has presented films on PBS that capture the full spectrum of the human experience, with a long commitment to centering women and people of color in front of, and behind, the camera. The series is known for introducing generations of viewers to groundbreaking works like Tongues Untied, American Promise and Minding The Gapand innovative filmmakers including Jonathan Demme, Laura Poitras and Nanfu Wang. In 2018, POV Shorts launched as one of the first PBS series dedicated to bold and timely short-form documentaries. All POV programs are broadcast nationally on PBS, POV.org and the PBS Video app.