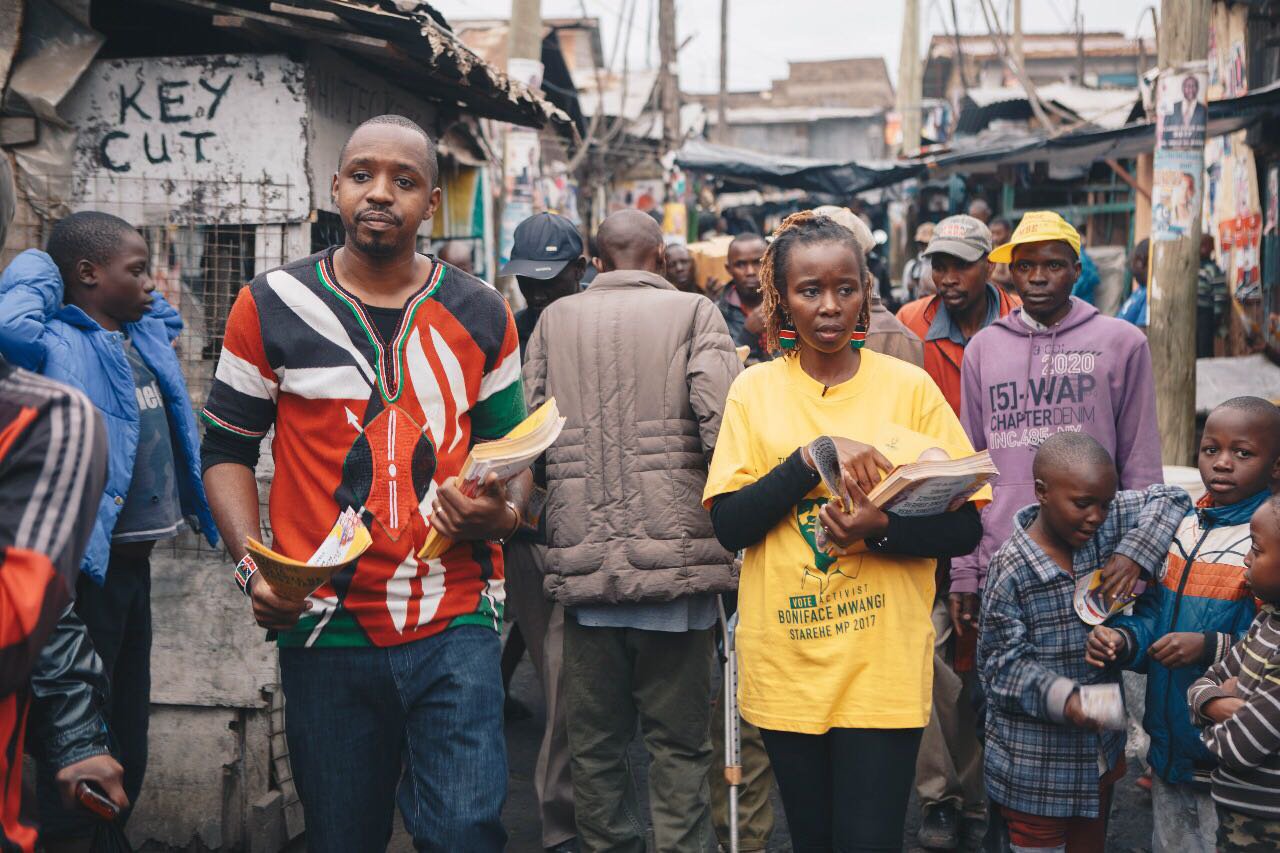 What is Boniface up to now? Is he gearing up for the next election?

Boniface started goat farming to help get his mind off things. He has been active on social media, sharing many different issues that come to his attention. He is contemplating another shot at Parliament but still hasn’t wholly made up his mind. It probably will be another surprise. Njeri has grown bolder in her activism. She was part of a group of investigative journalists that successfully exposed a crime syndicate involved in the smuggling of babies in one of the largest maternity hospitals in Kenya. They both are working to spend more time with their kids.

Over 30 activists have gone missing or died during the making of this film. Did you ever fear for your life while documenting protests, Boniface’s campaign, or the post-election violence?

When you are filming protests, most times the adrenaline is so strong that you don’t think about what is taking place. All you care about is capturing the moments to the best of your ability. However, there are moments like when you are arrested, beaten or hit by stones that as a team, you ask yourselves, "Why are we doing this?" One time, during the campaign, someone pulled a gun on us, and our hearts stopped for a second. Nothing scared us more than when the family’s lives were at risk.

Has documenting the work of activists changed you in any way? Do you feel a sense of hope or discouragement after seeing the outcome of this election and why?

At first, I was too scared to attend any of Boniface’s protests, but eventually, I did. From pigs to coffins and big doll babies, they were always crazy, and they never lacked excitement. Over a couple of years, I witnessed the whole package: loads of teargas, I was beaten twice, arrested and spent a few hours in jail. Boniface and his family opened a world to me that made me find both great encouragement and disillusionment. There is strength in those who wake up every day to fight for a better future for humanity, and there are many who would do anything to see people living in continued suffering. I choose to continue telling stories that may hopefully alleviate this continued struggle. I always have belief and faith in humanity and that we will eventually choose good.

Do you believe change can happen in Kenya with the help of people like Boniface?

Yes. We don’t have a choice. We have to support those who are working to make a change. What we are trying to say in the film is that being on the frontline is not the only way one is an activist, so much done in the background—every little support counts.

Where does the power lie in this film?

The people's memory. We made this film to be a mirror for people to hold up and see what collective memory loss (as a result of continuous rewriting of our history) looks like. I grew up under a dictatorship, looking forward to singing songs of praise to the ruling party and waving the flag at the president's car parade. I heard stories whispered about people missing, corruption and tribal clashes. But as the dictatorship ended, people behaved as though nothing wrong had happened. I didn't know it had a name: Collective Amnesia. Sadly, this isn't something that affects only Kenya. Societies who have felt immune to the recurrent and present-day challenges of tribalism, racism and so on find themselves in the same situation as us. We hope this film can be a catalyst for conversations and better human-centred decisions.

I am working to bring more stories to the world told by those who live and experience them. I am producing a few films from first-time filmmakers in Kenya, South Sudan and Zimbabwe. Softie taught us that collaboration can achieve amazing things; hence, I am co-directing a film following the world’s boldest experiment in universal basic income taking place in Kenya.