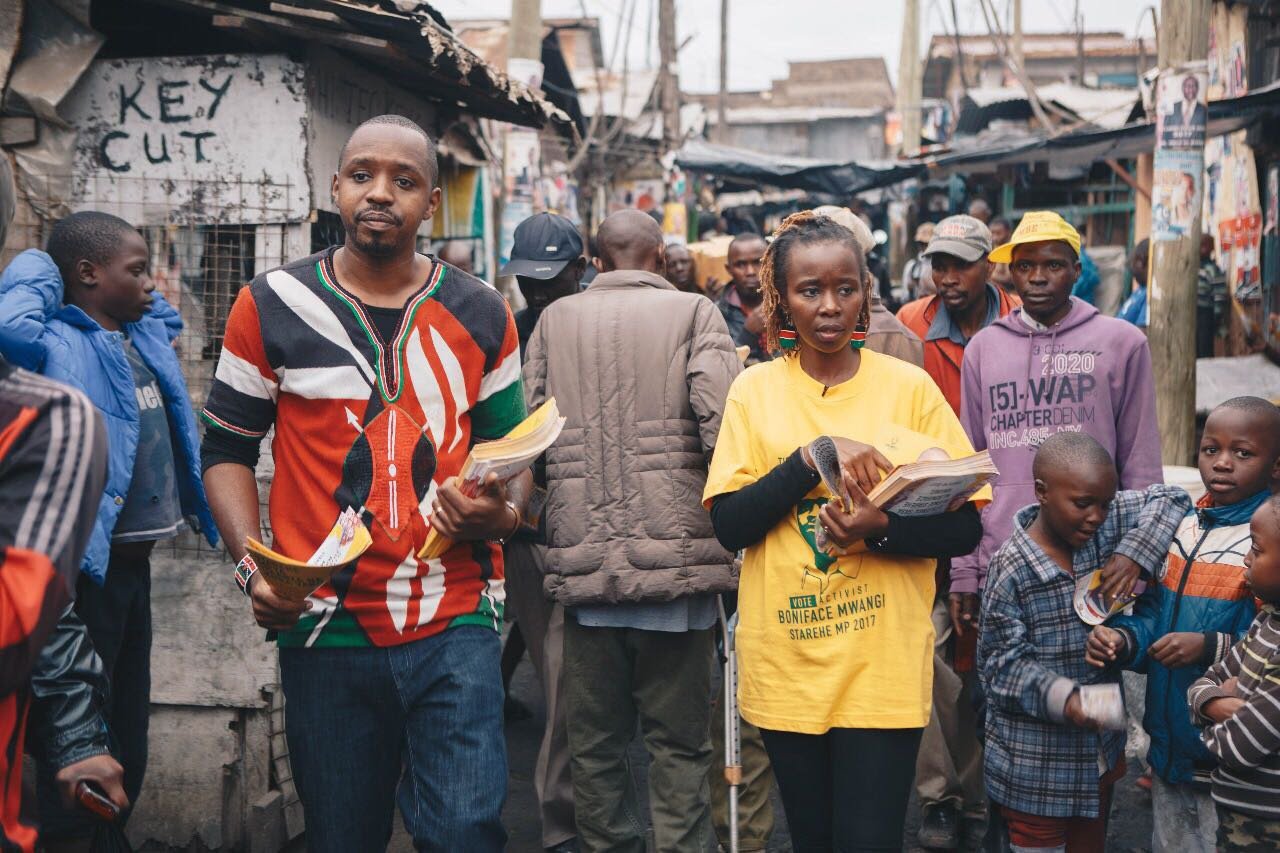 Boniface Mwangi, nicknamed ‘Softie” by his close friends and family, has long fought injustices in his country as a political activist and photojournalist. Now he’s taking the next step by running for office in a regional Kenyan election. From the moment Boniface decides to run, telling his wife, Njeri, in passing with a hesitant laugh, he responds to each challenge with optimism. But running a clean campaign against corrupt opponents becomes increasingly harder to combat with idealism alone. Boniface soon finds that challenging strong political dynasties is putting his family at risk. In the intimate documentary Softie by Nairobi-based director Sam Soko, Boniface wrestles with the question: “Should country really come before family, as he’s always believed?”

Softie makes its national broadcast and streaming debut on the PBS documentary series POV and at pov.org on Monday, October 12, 2020 at 10 p.m. ET (check local listings). The film is available to stream for free at pov.org until November 12, 2020. The critically-acclaimed Softie took the Special Jury Award at the 2020 Sundance Film Festival. Now in its 33rd season, POV is American television’s longest-running independent documentary series.

After meeting Boniface at a protest rally in 2013, Soko, who had directed several short music videos and films, decided to try his hand at directing a documentary. As Soko grew to know Boniface, he saw that underneath the tough man exterior, was a complex, vulnerable and deeply passionate person who got into activism for very personal reasons. What started out as a short video, that he had planned to take a year filming, evolved into a story about politics, family and what it means to be Kenyan. Filmed over five years throughout Kenya, Softie showcases chaos filled street protests against corruption, police brutality, extra judicial killings, along with insight into Kenya’s political campaigns and the country’s voting process.

“What an inspiring, and nerve-wracking, story about diving headlong into the political process to force change - through the eyes of this vibrant activist and his family,” said Chris White, executive producer of POV. “And who better to tell this Kenyan story than Kenyans themselves? This talented team brings the energy and chaos of deadly, bare-knuckle politics into your living room.”

“I came to realize that the life of an activist conceals many things,” said Soko. “As they are up against a society, whose mindsets are difficult to change, they also have to deal with their own families. From dynamic protests, failed elections, death threats, family fights and life changing decisions, this film tells the story of their unparalleled journey. The film explores the role of individuals and families in democracy today. In a world where sowing seeds of division continues to be encouraged, I believe telling this story will encourage preservation and protection of our democractic rights. The consequences of not doing so are catastrophic for ourselves and our families.”

Softie captures a charming idealist’s transformation through his grassroots campaign, while exploring the complexities of balancing Boniface’s deep love of country with the needs of his family. Moments with Njeri and their children deepen our understanding of the aspiring elected official, offering introspective respites from the turbulent pace of the campaign. Though set against the backdrop of a country in transition, Soko’s film goes beyond politics to reveal what fuels one activist’s need to push for change.

Boniface “Softie” Mwangi born on July 10, 1983 is a Kenyan photojournalist, politician and activist involved in social-political activism. He is known for his images of the post-election violence that hit Kenya in 2007–2008 and his work as one of Kenya’s most prominent activists. Boniface grew up in an impoverished single parent home in Starehe county, with his six siblings. Mwangi dropped in and out of school during this period and helped his mother sell books on Nairobi’s streets. When his mother died in 2000, Mwangi, then 17, decided he had to change if he was to survive. He joined a Bible School with the intention of becoming a pastor and secured a diploma in Bible Studies. While at school he became interested in photography.

Despite not having a high school education, Mwangi managed to gain a place at a private journalism school. To fund his studies, he had to continue selling books on the street, but soon began to gain experience as a photojournalist. He published photographs in a national newspaper and in 2005 won his first photography prizes. He was awarded the 2008 and 2010 CNN Africa Photojournalist of the Year Award for the photos that he took, documenting the widespread post-election violence of 2007-2008. He suffered from PTSD because of all the violence that he witnessed and quit his job as a photographer to work on social justice in Kenya, mainly using street graffiti, art and street protests to call attention to human rights violations and political corruption in the country. He has been recognized as a global TED fellow for his activism work. One of his longest lasting initiatives to date is PAWA 254, a hub and space for artists and activists to work together towards social change in Kenya.

Njeri Mwangi finished college in 2005 and knew she had to work in social impact but didn’t know where. Her upbringing guides her belief in God and family first. A chance encounter at an ice cream shop with Boniface in 2006 changed her life forever. Over the years as her husband gained more prominence in public, she has remained in the shadows, raising their 3 children Nate, Naila and Jabu and Co-Founding PAWA 254 one of Nairobi’s first creative social enterprises. In 2016, her husband announced that he was running for political office. This decision made her do something she had worked hard to never do - step out of the shadows and share her private life with the world.

Boniface and Njeri are Kikuyu. The Kikuyu are the largest, out of the country’s 42 tribes. They have three kids - the eldest is Nate, the middle child is Naila and the last born is called Jabali. Boniface and Njeri purposely chose non-Kenyan tribal names for their children’s first names, so that they could have unique nontribal identities.

Sam Soko is a film director, producer and editor based in Nairobi who seeks out stories that enable him to engage in socio-political spaces. His work on civic literacy projects in music, non-fiction and fiction has allowed him to connect with artists around the world. He is co-founder of LBx Africa, a Kenyan a production company that service-produced the 2018 Oscar nominated short fiction film “Watu Wote”. Soko’s first feature documentary project Softie, premiered at the 2020 Sundance film festival, winning a special jury prize for editing. He is an outspoken defender of freedom of expression and has taken part in global conversations on how to make media matter when the world is on fire. Soko is currently co-directing a film following the world’s boldest experiment in universal basic income taking place in Kenya.

Toni is a factual producer and founder of "We are not the machine Ltd", a Kenyan based production company. Her past credits include half hour documentaries for Al Jazeera, MTV Europe, BBC and CCTV Africa. For the last six years, her career as a creative producer has focused on telling the stories of outsiders, rebels and change makers on the African continent. Toni is currently producing three feature documentaries, that have received support from Sundance, Hotdocs, IDFA Bertha Fund and Docubox.

Produced by Lbx Africa in collaboration with We are not the machine Ltd and Eyesteelfilm.

Erika Dilday Announced as the New Executive Director of American Documentary Inc. 'Through the Night' | Press Kit POV Acquires Fruits of Labor out of SXSW Film Festival
More from The Press Room