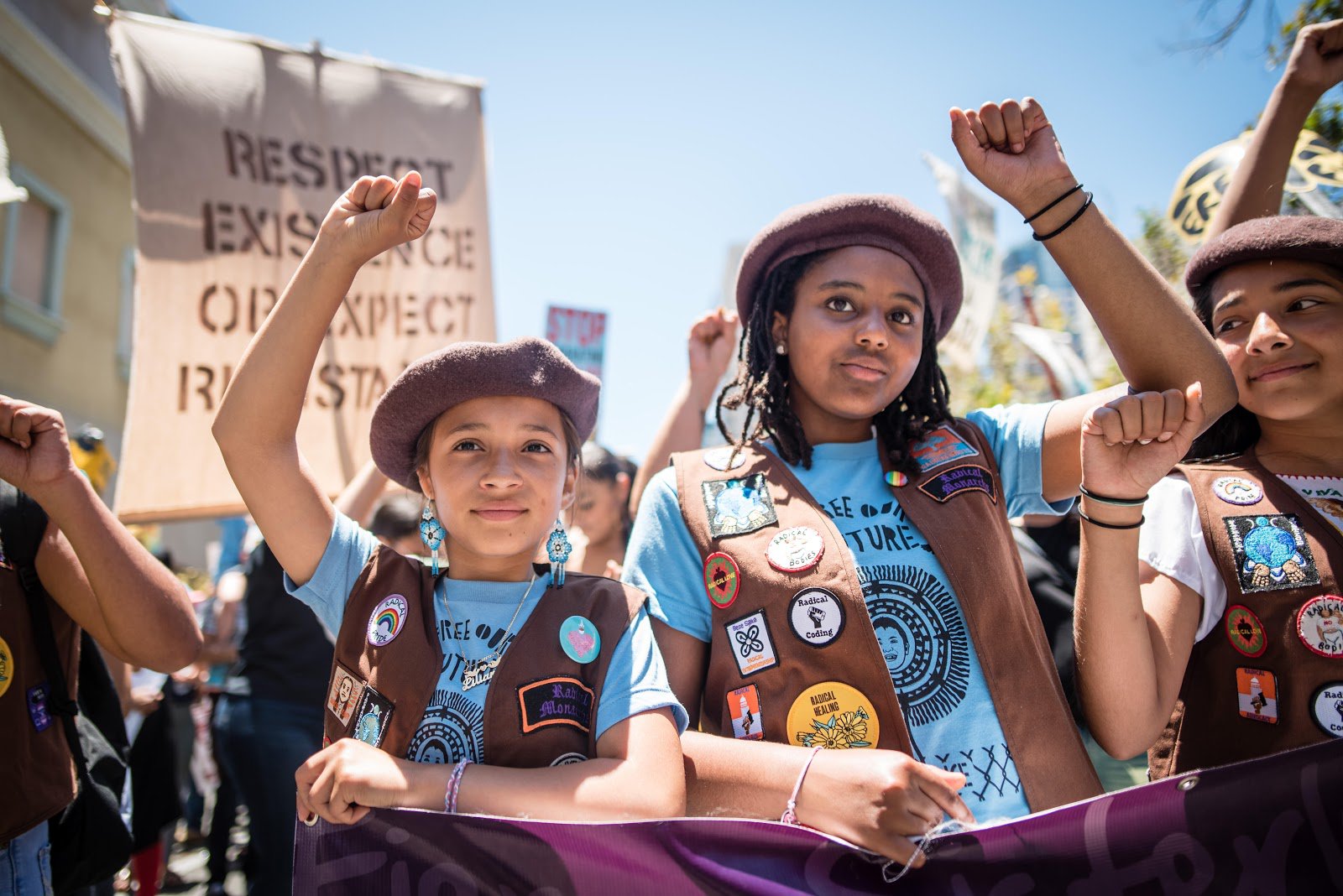 Fierce Sisterhood and Social Activism Take Center Stage in "We Are the Radical Monarchs," Premiering July 20, 2020 on PBS

New York, NY, July 6, 2020 – Set in Oakland, a city with a deep history of social justice movements, We Are the Radical Monarchs follows the two trailblazing, queer women of color who created the Radical Monarchs, a more diverse and inclusive alternative to the scout movement.

With bullhorns and protest signs at the ready, co-founders Anayvette Martinez and Marilyn Hollinquest juggle the challenges of growing their organization after a viral explosion of interest in the Radical Monarchs’ mission to create and inspire a new generation of activists. The film takes us on a journey following the first troop of Radical Monarchs for over three years—before and after the 2016 presidential election—on the frontlines of social justice as they complete units on such subjects as LGBTQ allyship, environmental racism and disability justice. The film also documents what it looks like for the co-founders to respond to the national and international desire for troops—in other words, to go from organizing a group of ten girls to starting a movement.

Directed by Linda Goldstein Knowlton, We Are the Radical Monarchs has its national broadcast debut on the PBS documentary series POV and pov.org on July 20 at 9 p.m. (check local listings). POV is American television’s longest-running independent documentary series, now in its 33rd season.

“This is a womxn of color empowerment story at its core; as an intersectional feminist and a filmmaker, it is my intention to amplify womxn’s and girls' voices. The Radical Monarchs give me hope for the future, and with this film I can share that hope,” said filmmaker Linda Goldstein Knowlton.

Radical Monarchs co-founder Martinez was inspired to create a diverse and inclusive group for her daughter, Lupita, and other girls of color. Martinez and Hollinquest’s work is anchored in the belief that adolescent girls of color need dedicated spaces and that the foundation for this innovative work must also be rooted in fierce interdependent sisterhood, self-love and hope.

Instead of selling cookies, these formidable and outspoken girls earn badges for units on topics such as radical beauty, radical bodies and radical roots. A typical troop meeting may focus on discussing what defines pride, or the gender spectrum, or what it means to be an ally. Or it may find the girls meeting with an original member of the Black Panthers, getting into the parks and the streets for protests, taking part in Black Lives Matter marches or even making a road trip to the California legislature to advocate for highly pressing issues in their communities for their radical advocacy badges. For the inquisitive young women who make up the first Radical Monarchs troop—including, 8-year-old Amia and Martinez’s 10-year-old daughter, Lupita—being radical means respecting others while still standing up for yourself.

And while it may be surprising to hear such confident declarations coming from a group of tweens, that’s only a sample of the inner strength, the personal growth and the social awareness We Are the Radical Monarchs reveals.

“The dynamic young women in this film are the future, and the co-founders embody the strength, vision, perseverance and radical love that we should all aspire to. I’m so proud to celebrate their stories and important perspectives in the season opener for the 33rd season of POV," said Justine Nagan, executive producer/executive director of POV/American Documentary.

Following the premiere of We Are the Radical Monarchs, on July 20, 2020 at 10:30 p.m. POV will also premiere Season 3 of POV Shorts with three stories reflecting the many faces of love through memory, community and family. “I'm excited to launch this new season with this heartwarming trio of stories,” said Opal H. Bennett, producer of POV Shorts. “POV Shorts remains a destination for outstanding short stories. I can’t wait to reveal the rest of this year’s line-up.”

The season opener series, entitled “Cherish,” features True Love in Pueblo Textil (2017, Horatio Baltz), where we meet 9-year-old Maribel, who tells us how it feels to be stricken with the world's oldest affliction; When I Write It (2020, Nico Opper, Shannon St. Aubin), a love letter to the rapidly-gentrifying Bay Area from two teenage artist natives who spend a day in creative and community fellowship; and La Lectora (2017, Yulia Piskuliyska), an exploration of the longstanding Cuban cigar factory tradition of a reader who entertains the cigar makers while they go about their delicate toil.