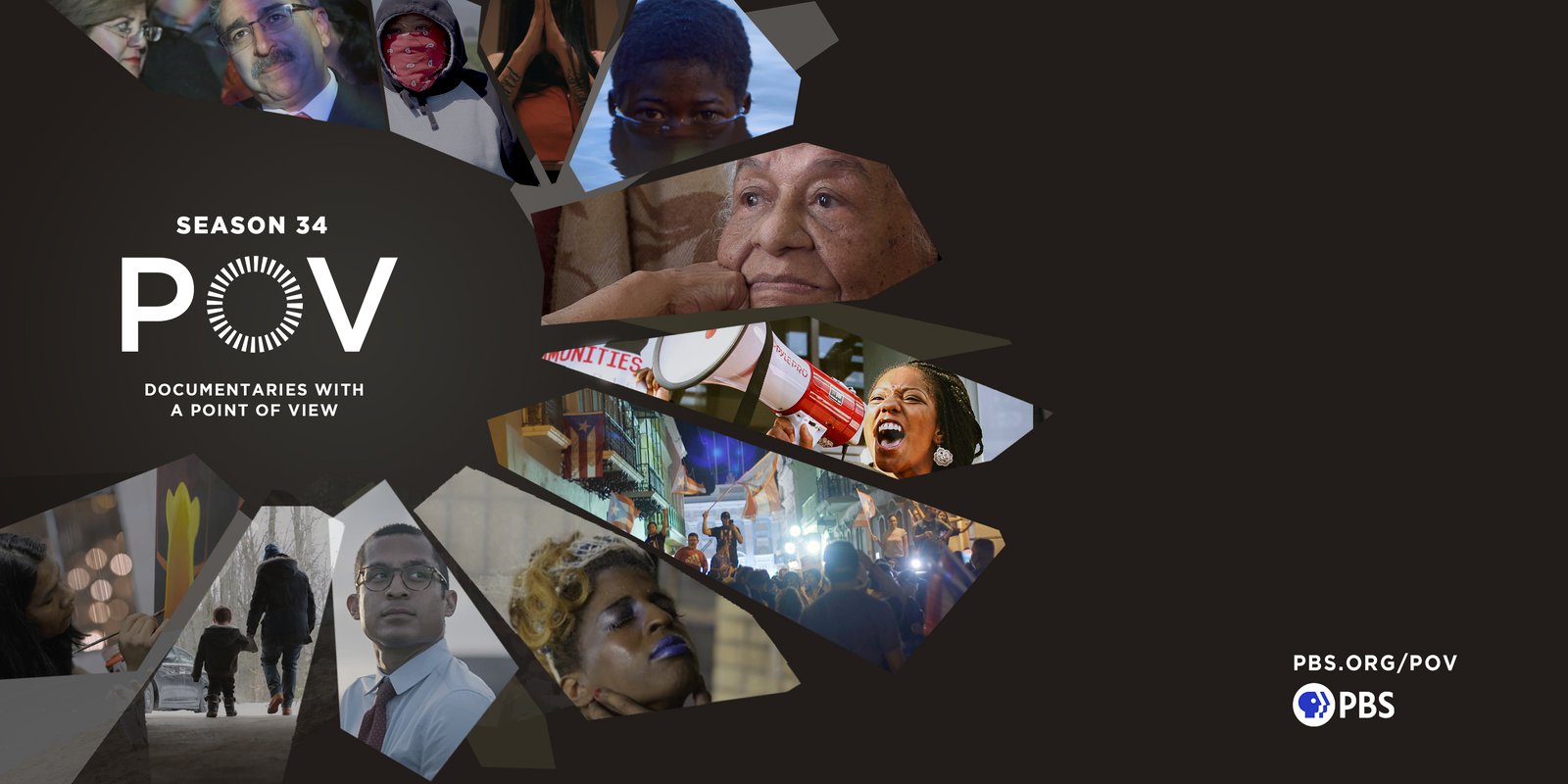 Powerful points of view into immigration, economic inequality and racial justice—more than half directed by people of color and women, with a spotlight on Latinx cinema

New York, N.Y. – May 6, 2021 12 p.m. – POV returns to PBS in July with its 34th season, a slate of films that reaffirm public media’s vital role as a platform for the people and in sparking national dialogue. America’s longest-running documentary series’ newest season follows artists, activists, elders, comedians, frontline workers and politicians across the globe as they navigate their personal stories and the larger histories under which they take shape.

The season kicks off with writer and comedian CJ Hunt’s directorial debut, The Neutral Ground, on July 5. All films are accompanied by educational resources and will be available to stream on all PBS platforms, including PBS.org and the PBS Video App. Premieres continue through fall 2021, with primetime specials in early 2022.

POV maintains its decades-long commitment to centering authentic independent stories and the diverse artists who tell them. This year, more than half of POV films were directed by filmmakers of color and women, trans or gender nonconforming filmmakers. The series also presents international works from Colombia, the Dominican Republic, Palestine and Peru. Additional titles, including the fourth season of POV Shorts and streaming and interactive projects, will be announced throughout the year.

“Since POV’s inception nearly 35 years ago, the series’ mission has been simple: to use public television to meet the moment; to program the stories and voices that speak to the present and to the future of nonfiction film; and to ensure that a wide diversity of perspectives is represented both in front of and behind the camera,” said Erika Dilday, the incoming executive director of American Documentary and new executive producer of POV. “These are films that are unafraid to confront the issues at the heart of their communities.”

“POV’s new season on PBS embodies the attributes of authentic and diverse storytelling and builds connections with audiences in the communities we serve. With a variety of multiplatform touchpoints, including free educational resources to support classroom learning, POV’s 34th season delivers on public television’s mission in a bold and impactful way,” said Sylvia Bugg, chief programming executive and general manager, general audience programming.

The Neutral Ground, which will debut at the 2021 Tribeca Film Festival, documents the fight over monuments in New Orleans and America’s troubled romance with the Lost Cause. In 2015, director CJ Hunt begins filming the New Orleans City Council’s vote to remove four Confederate monuments. But when that removal is halted by death threats, Hunt sets out to understand why a losing army from 1865 still holds so much power in America.

Upholding its reputation as the premier destination for artful, thought-provoking films, POV continues its season with new work from celebrated as well as up-and-coming nonfiction directors around the globe. In Stateless, veteran filmmaker Michèle Stephenson follows a young attorney as she advocates for Dominicans of Haitian descent who have been stripped of their citizenship. Emmy Award-winner David Osit returns to POV with Mayor, an unconventional look at the Israeli occupation of Palestine through the eyes of the Christian mayor of Ramallah. Independent Spirit Award-winner Elegance Bratton’s Pier Kids shows us the world of New York City’s Christopher Street Pier, where Black queer and trans youth navigate homelessness while building chosen families. And rising filmmaker Ashley O’Shay’s directorial debut, Unapologetic, focuses on two fierce abolitionists in Chicago whose upbringing and experiences shape their activism and views on Black liberation.

POV co-productions comprise one-third of the season’s lineup, reflecting a series commitment to early support for new and innovative artists. Leah Galant and Maya Cueva’s On the Divide, which debuts at the Tribeca Film Festival in June, tells the story of the last reproductive health clinic on the U.S./Mexico border and the people whose lives revolve around it. Additional co-productions include previously announced titles Cecilia Aldarondo’s Landfall, winner of DOC NYC’s Viewfinders Grand Jury Prize, and Angelo Madsen Minax’s poetic North by Current, which premiered at the 2021 Berlinale.

The season also offers a wide range of Latinx perspectives, styles and stories with six titles from across the Americas. In addition to Stateless, On the Divide and Landfall, Oscar Molina’s La Casa de Mama Icha follows the titular matriarch, who returns to Colombia, finding heartbreak and joy after decades in the U.S. In Núria Frigola Torrent’s The Song of the Butterflies, we meet an Indigenous painter from the White Heron clan of the Uitoto Nation in Peru who journeys home to the Amazonian land of his ancestors. Emily Cohen Ibañez’s debut feature documentary, Fruits of Labor, shows the impact of ICE raids on a Mexican-American teen’s dreams. The film will be POV’s first-ever collaboration with VOCES, PBS’ signature Latino arts and culture documentary showcase.

“As one of the most trusted curators of independent and boundary-pushing work on broadcast television, POV has always presented fearless stories that deliver signature points of view. This season’s films continue in this tradition with some of the boldest documentaries of the year,” said Chris White, executive producer of POV, who marks his twentieth season with the series this year.

POV is one of the most highly-acclaimed documentary series on television. In the last year alone, the series received eight News & Documentary Emmy nominations, and earned the 2020 Best Documentary award for The Silence of Others (POV Season 32). In addition to its Academy Award nomination for Best Documentary Feature, The Mole Agent (POV Season 33) was also shortlisted for Best International Feature. Four POV films were awarded Peabody Awards in 2020.

The Song of the Butterflies directed by Núria Frigola Torrent, produced by Rolando Toledo

In central California, a Mexican-American teen goes to work when ICE raids threaten her family. A co-production of POV and Latino Public Broadcasting, co-presented by POV and VOCES. Official Selection, SXSW Film Festival.

Mama Icha returns home to Colombia, finding heartbreak and joy after decades in the U.S. A co-presentation of Latino Public Broadcasting.

Things We Dare Not Do directed by Bruno Santamaría, produced by Abril López Carillo

After being diagnosed with ALS, Ady Barkan launches a national movement for healthcare. Official Selection, SXSW Film Festival and Winner, Audience Award for Documentary Feature and the Special Jury Recognition for Humanity in Social Action.

On the Divide directed by Maya Cueva and Leah Galant

The lives of three Latinx people intersect at the last abortion clinic on the border. A co-production of POV and Latino Public Broadcasting. Official Selection, Tribeca Film Festival.

Produced by American Documentary, POV is the longest-running independent documentary showcase on American television. Since 1988, POV has presented films on PBS that capture the full spectrum of the human experience, with a long commitment to centering women and people of color in front of, and behind, the camera. It was on POV that American television audiences were introduced to groundbreaking works like Tongues Untied, The Act of Killing and American Promise and innovative filmmakers including Jonathan Demme, Nanfu Wang, and Laura Poitras. In 2018, POV Shorts launched as one of the first PBS series dedicated to bold and timely short-form documentaries.