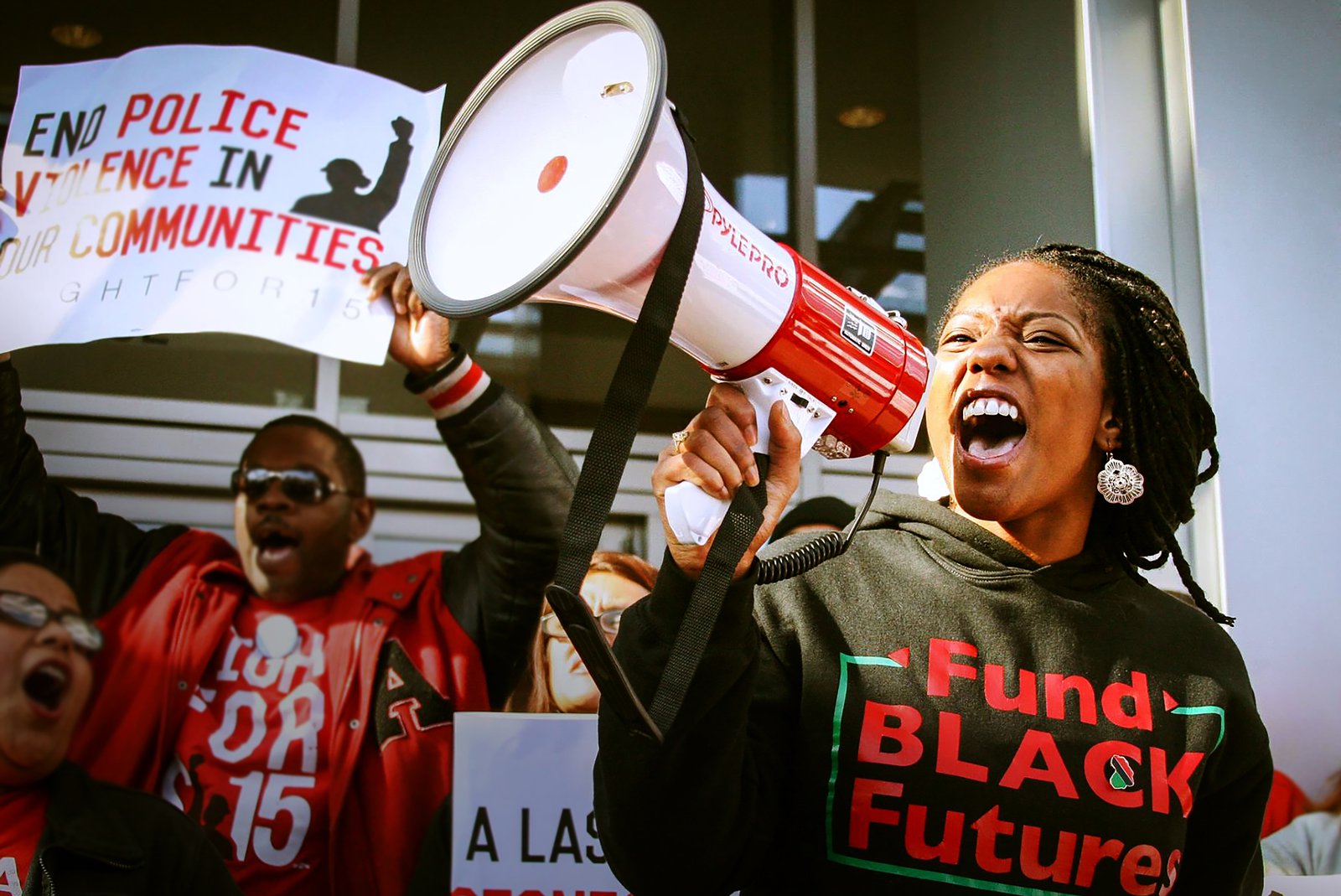 New York, N.Y. – October 22, 2021 – Meet Janaé Bonsu, 24, and Bella BAHHS, 22, two fierce Black, queer abolitionists whose upbringing and experiences shape their activism and views on Black liberation in Unapologetic, directed by Ashley O’Shay and produced by Morgan Elise Johnson. Through their lens, the documentary provides an inside look into the ongoing movement work that transformed Chicago, from the police murder of Rekia Boyd in 2012 to the election of mayor Lori Lightfoot in 2019. The film also spotlights the social justice work being done by young activists in communities across the country by the broader Movement for Black Lives.

Unapologetic makes its national broadcast and streaming premiere as part of POV’s 34th season on Monday, December 27th at 10 p.m. ET on PBS (check local listings) and streams free at pov.org. until January 26, 2022.

In Unapologetic, Chicago based, first-time feature film director O’Shay captures a tense and polarizing moment in Chicago’s fight for the livelihood of its Black residents. The film follows organizers Janaé and Bella, as they work within the Movement for Black Lives to seek justice for Rekia Boyd and Laquan McDonald, two young Black people killed by Chicago police. They aim to elevate a progressive platform for criminal justice to a police board led by Lori Lightfoot, the former President of the Chicago Police Board and Chair of the Police Accountability Task Force, and a complicit city administration, while also elevating leadership by women and femmes.

In the process of filming Unapologetic, O’Shay realizes that organizers like Janaé and Bella reflect her own identity - and that there isn't enough storytelling that centers Black women much less covers Black queer women at the forefront of organizing movements.

Director-Producer, Ashley O’Shay said, “After a historical summer of Black uprising last year, we are elated to share this story with a public TV audience. What is so captivating to witness is the tapestry of this Black queer feminist movement that lies at the helm of fighting for all Black rights. This Chicago story resonates with communities throughout the world, as more and more citizens organize for Black liberation. We must continue to uplift Black feminist leaders like Janaé and Bella, and we look forward to engaging with organizations and partners through our partnership with POV.”

“While the world witnesses this newly-infused Civil Rights Movement, I’ll argue that the blueprint can be mapped to Chicago,” said producer Morgan Elise Johnson. “This city represents a microcosm of what resistance looks like. And, the crusade is led by young, Black abolitionist voices who are demanding justice for all.”

“In Unapologetic we get a bold, uncompromising look into the vanguard of the activist movements that are sure to define the ongoing struggles for justice in this country. In Ashley and Morgan we get two of the most exciting young filmmakers who are sure to make waves in the industry for decades to come. And in the stories of Bella and Janaé we get to see the dynamism and power of Black feminist voices and the hope and struggles that inform their work” said American Documentary | POV executive director Erika Dilday.

With Unapologetic and Le Frère we take two vastly different looks at the strength of family, both the ones you are born with and the ones you make. Unapologetic shows us young Black queer women as the powerful force they are and the mobilizing force that is making a difference in their Chicago community. Le Frere brings us into the world of a young man whose family supports him physically and emotionally and who dreams beyond the limits of his body. We are honored to bring them to the POV audience.

Unapologetic, the feature directorial debut by Ashley O’Shay, produced in collaboration with Kartemquin Films, made its world premiere August 2020 at the BlackStar Film Festival. It also screened at Frameline, New Orleans Film Festival, and DOC NYC, and was shortlisted by the International Documentary Association for Best Documentary Feature in 2020.

Following the conclusion of Unapologetic, the short film Le Frère will make its POV broadcast debut. Directed by Jérémie Battaglia, Le Frère tells the story of a French-Moroccan family tending to their disabled son. Living with an illness that is causing him to lose the use of his body, Kaïs is awoken every morning by a different member of his family. Though paralyzed, he dreams he is the hero of his favorite manga, along with his brothers: Fehd, the bodybuilder and Zaïd, the ninja.

Ashley O’Shay (Director/Producer) is a director-DP based in Chicago, IL, whose work focuses on illuminating marginalized voices. She has collaborated with a number of national brands, including Nike, Vox, Wilson Tennis, and Dr. Martens. Most recently, she filmed an international commercial spot for Wilson Tennis, with over 1M views in digital markets. In 2020, she captured the final episode of Dr. Martens' "Tough As You" series, starring the band Phony Ppl, accruing over 65K views on social and web. Her work also appeared in the critically-acclaimed Lifetime docuseries, Surviving R. Kelly. Although she has crafted many short films, Unapologetic is her first venture into the feature world. The film premiered at the 2020 BlackStar Film Festival, and was shortlisted for the International Documentary Association Awards.

Morgan Elise Johnson (Producer) is an independent filmmaker and publisher. Her documentary career was born at Northwestern University, and nurtured by Kartemquin Films' internship program. She grew to become a staff producer with Milwaukee-based 371 Productions. There she produced and co-directed the PBS/WORLD CHANNEL documentary There Are Jews Here, which premiered at the San Francisco Jewish Film Festival in 2015 and then toured for two years before its national PBS/World Channel broadcast. She also associate produced a Virtual Reality documentary about abortion clinic harassment called Across the Line which premiered at Sundance Film Festival’s New Frontiers exhibit. Her life and career evolved when she left 371 in 2016 and co-created The TRiiBE (thetriibe.com), a digital publication and production company dedicated to reshaping the narrative of Black Chicago which has earned Morgan a spot on Forbes’ 30 Under 30 Media Class of 2019.