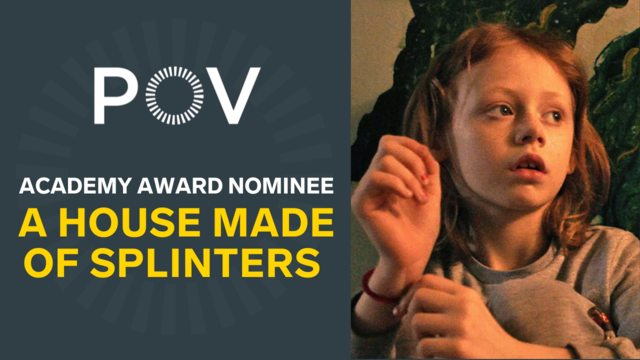 New York, N.Y. – January 25, 2023 – The Academy of Motion Picture Arts and Sciences announced yesterday that A House Made of Splinters, directed by Simon Lereng Wilmont, and produced by Oscars® nominee Monica Hellström (Flee), was nominated for Best Documentary Feature Film at the 95th Academy Awards®. Recently acquired by POV, A House Made of Splinters will make its national broadcast premiere on PBS as part of POV's upcoming 36th season launching summer 2023.

Chris White, executive producer, POV and America ReFramed said: “All of us at POV are overjoyed for Simon, Monica and the A House Made of Splinters team for this well-deserved honor. This timely film illuminates the fragility of social systems in a country in crisis. Simon captures the impact on the children caught in this web with honesty, sensitivity and moments of hope.”

Director Simon Lereng Wilmont said: "We are honored and humbled by the nomination for A House Made of Splinters. It is wonderful that the kids’ story has touched so many people and we hope it will continue to touch the hearts of audiences around the world. Thank you to Margarita, Olga, Eva, Alina, Sasha and Kolya for their bravery in telling their extraordinary stories and giving us the privilege of sharing them.

Thank you to Final Cut For Real, Moonman, Arte, POV, BBC, Cinephil, and the entire international crew. We are incredibly proud to be working with all of you. Without you, there would be no film"

A House Made of Splinters

In a war-worn and impoverished corner of Eastern Ukraine where addiction casts a long shadow, there sits a safe haven for children temporarily removed from their parents. A House Made of Splinters follows three kids awaiting their fate—will they go back or move on to a new home?— while a group of dedicated social workers create small moments of joy and respite from childhood's all but lost.

Filmmakers and POV alumni Simon Lereng Wilmont and Monica Hellström (He’s My Brother) return with a follow-up to their 2018 Oscars® shortlisted Best Documentary Feature The Distant Barking of Dogs, offering a unique look into how the long-term consequences of war on a society already under strain impacts the most vulnerable. This is a poignant and deeply intimate portrait of a remarkable way station filled with care, support, and trust for a group of kids who are in desperate need of more.

The Distant Barking of Dogs and He’s My Brother made their national broadcast premieres on POV, America’s longest running non-fiction series, that celebrated its milestone 35th anniversary season in 2022.

A House Made of Splinters, made its world premiere at the 2022 Sundance Film Festival.

The 95th Oscars will be held on Sunday, March 12, 2023, at the Dolby Theatre at Ovation Hollywood and will be televised live on ABC.

PBS, with more than 330 member stations, offers all Americans the opportunity to explore new ideas and new worlds through television and digital content. Each month, PBS reaches over 120 million people through television and 26 million people online, inviting them to experience the worlds of science, history, nature and public affairs; to hear diverse viewpoints; and to take front row seats to world-class drama and performances. PBS’s broad array of programs has been consistently honored by the industry’s most coveted award competitions. Teachers of children from pre-K through 12th grade turn to PBS for digital content and services that help bring classroom lessons to life. Decades of research confirms that PBS’s premier children’s media service, PBS KIDS, helps children build critical literacy, math and social-emotional skills, enabling them to find success in school and life. Delivered through member stations, PBS KIDS offers high-quality educational content on TV — including a 24/7 channel — online at pbskids.org, via an array of mobile apps and in communities across America. More information about PBS is available at pbs.org, one of the leading dot-org websites on the internet, or by following PBS on Twitter, Facebook or through our apps for mobile and connected devices. Specific program information and updates for press are available at pbs.org/pressroom or by followingPBS Communications on Twitter.