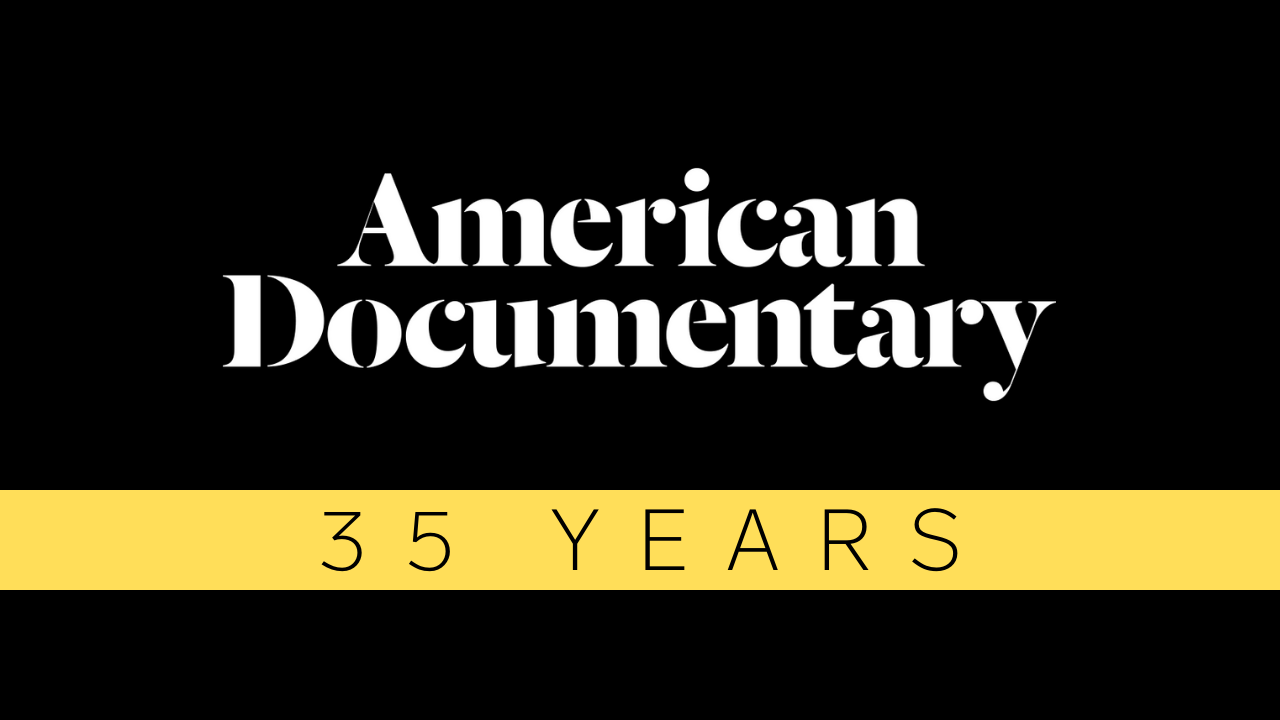 New York, N.Y. – American Documentary, Inc. (AmDoc), the nonprofit behind groundbreaking public media programs and national impact initiatives, will celebrate its 35th anniversary in 2022 with major series milestones and a new round of regional partnerships. Founded in 1987, the organization has presented more than 700 documentaries on-air, online and in communities in collaboration with generations of bold, independent filmmakers. American Documentary has won every major broadcast and journalism award, including 45 Emmy Awards, 26 George Foster Peabody Awards, 15 Alfred I. duPont-Columbia University Awards, three Academy Awards and the first-ever George Polk Documentary Film Award.

“I am honored and humbled to work with AmDoc’s amazing staff, our deeply dedicated Board and the talented independent filmmakers whom we have supported over the past 35 years," said Chris Plaut, the organization’s recently elected board chair. He takes over from Margaret Drain, the public media veteran who held the position for 4 years before retiring from the board after nearly 20 years of service.

The celebration begins in February with the tenth anniversary of America ReFramed, the award-winning anthology series co-produced with WORLD Channel. The season premieres with a special PBS presentation of Fannie Lou Hamer's America, a portrait of the life and work of the sharecropper-turned-human rights activist from Mississippi – told entirely through Hamer’s own words. The film was produced by Hamer's great-niece Monica Land and Selena Lauterer and directed by Joy Davenport. Since 2012, America ReFramed has aired 170 films from over 370 diverse filmmakers, with female and BIPOC representation at the forefront of the series' mission. The tenth season signals its new Thursday night time slot and will feature a slate of new titles from multicultural makers by and about ‘the other America,’ as well as topical year-round programming.

Its newest series POV Shorts will premiere its fifth season in the fall, building upon its reputation as public media’s home for the best in short form nonfiction. Helmed by producer Opal H. Bennett, the series won its first News and Documentary Emmy Award for ‘Best Documentary Short’ with The Love Bugs in 2021. Two films from the current season – Águilas and A Broken House – recently were named to the 94th Academy Award shortlist. Recent POV and America ReFramed features Through the Night, Softie, and Meltdown in Dixie are finalists in the prestigious Alfred I. DuPont Columbia University Awards competition to be announced. All three American Documentary series – POV, POV Shorts, and America ReFramed – received feature, short, music score, writing, and series nominations, respectively, at the upcoming 37th International Documentary Association (IDA) Awards.

Throughout the year, American Documentary goes “beyond the broadcast” supporting community partners with innovative ways to spark dialogue using POV films. The National Endowment for the Arts recently approved the organization’s impact arm POV Engage for a grant to continue its signature impact initiative ‘Our America: Documentaries in Dialogue.’ Launched in the wake of the 2016 elections, ‘Our America’ empowers PBS stations and local partners to bring their communities together in times of deepening division and disconnection. Recent partners include PBS Hawai’i, Alaska Public Media, Blue Ridge PBS, WTCI Tennessee, and WOUB in Athens, OH.

More programming for the anniversary year will be announced in the coming months, including the full lineups for POV and POV Shorts and virtual and in-person celebrations with filmmakers and fans across the country. Per its mission, American Documentary will make all films available to national audiences through public media broadcasts, streaming and VOD, with most POV titles available for non commercial, non theatrical screenings through the POV Community Network.

WORLD shares the best of public media in news, documentaries and programming. WORLD’s original series examine the issues and amplify the voices of those often ignored by mainstream media. The multicast 24/7 channel helps audiences understand conflicts, movements and cultures from around the globe. Its original work has won a Peabody Award, an Alfred I. duPont-Columbia Award, a National News and Documentary Emmy Award, two Webby Awards, and many others honoring diversity of content and makers. WORLD is carried by 195 member stations in markets representing over 75.1% of US TV households. Funding for WORLD Channel is

provided by the Corporation for Public Broadcasting, the John D. and Catherine T. MacArthur Foundation, Wyncote Foundation and the National Endowment for the Arts and Artworks. WORLD is produced by GBH in partnership with WNET and is distributed by American Public Television (APT).  Find out more at WORLDChannel.org.

PBS, with more than 330 member stations, offers all Americans the opportunity to explore new ideas and new worlds through television and digital content. Each month, PBS reaches over 120 million people through television and 26 million people online, inviting them to experience the worlds of science, history, nature and public affairs; to hear diverse viewpoints; and to take front row seats to world-class drama and performances. PBS’s broad array of programs has been consistently honored by the industry’s most coveted award competitions. Teachers of children from pre-K through 12th grade turn to PBS for digital content and services that help bring classroom lessons to life. Decades of research confirm that PBS’s premier children’s media service, PBS KIDS, helps children build critical literacy, math and social-emotional skills, enabling them to find success in school and life. Delivered through member stations, PBS KIDS offers high-quality educational content on TV – including a 24/7 channel, online at pbskids.org, via an array of mobile apps and in communities across America. More information about PBS is available at www.pbs.org, one of the leading dot-org websites on the internet, or by following PBS on Twitter, Facebook or through our apps for mobile and connected devices. Specific program information and updates for press are available at pbs.org/pressroom or by followingPBS Communications on Twitter.